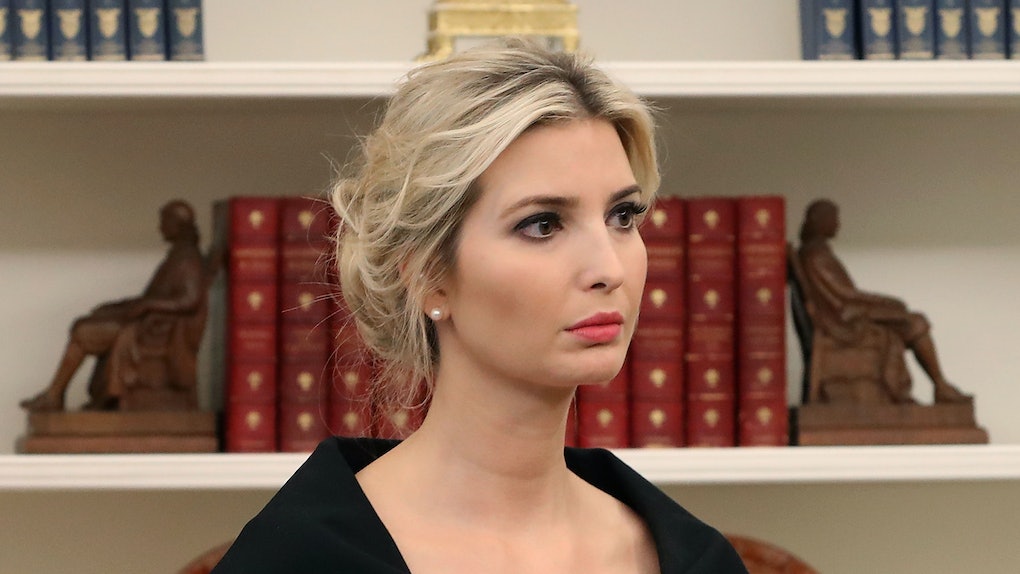 Ivanka Trump Doesn't Speak Out On Controversies Because It's Not Her Job, She Says

We all have limits in the workplace, but there are some things that can be really frustrating, like saying a certain role or task isn't your job when it's all but been confirmed that it actually is. This applies to none other than the first daughter herself. If you've ever wondered why Ivanka Trump doesn't speak out on controversies it's because she apparently feels that it's not her "job" to do so. Oof. Elite Daily reached out to the White House for further comment on or clarification of her comments but did not hear back by the time of publication.

The revelation came on Feb. 8, when Trump sat down for an interview with ABC News. The basis of the chat was supposed to be about the first daughter's new global initiative to empower women in developing countries, but interviewer Abby Huntsman also used the moment to challenge Trump on how she squares that work with her father's more damaging policies, per Newsweek.

After Huntsman reportedly asked the first daughter why she didn't speak out in the height of the Trump administration's highly controversial "zero tolerance" policy, which resulted in the separation of migrant families back in 2018, Trump replied that it's not her "job" to share her viewpoint on things she may disagree with. Well, OK then. Elite Daily reached out to the White House for further comment on or clarification of her comments but did not hear back by the time of publication.

She added, “I think that when you hear me start to speak publicly on an issue that's active, it's because my voice isn't being heard privately.”

Trump — a self-avowed advocate for women and children — was met with overwhelming criticism during the summer of 2018 over her silence as thousands of children were separated from their families after crossing into the United States southern border illegally and heartbreaking images and audio of the conditions in detention camps made headlines. While people were expressing their disbelief and anger over the policy, Trump was on Twitter posting things like Chinese proverbs and sharing photos to Instagram like this:

Though reports surfaced saying that the first daughter had actually spoken to her father about the separation policy in private, it wasn't until after he decided to pull the plug on the regulation that June (amid mounting backlash) that she opened up about it — and she did so in an, um, sort of mind-boggling way. She shared a tweet that shifted the responsibility on Congress to find a better "solution" to the policy, even though there was never a policy that required families be separated in the first place.

In a later interview at an Axios 360 event in August 2018, Trump called the separations a "low point" for her, which might have been a serious surprise considering how tight-lipped she appeared to be before her father ended the policy. She explained:

Even more complicated, I suppose, is deciding when to speak up about things. But hey, this is a Trump world and we're just living in it.