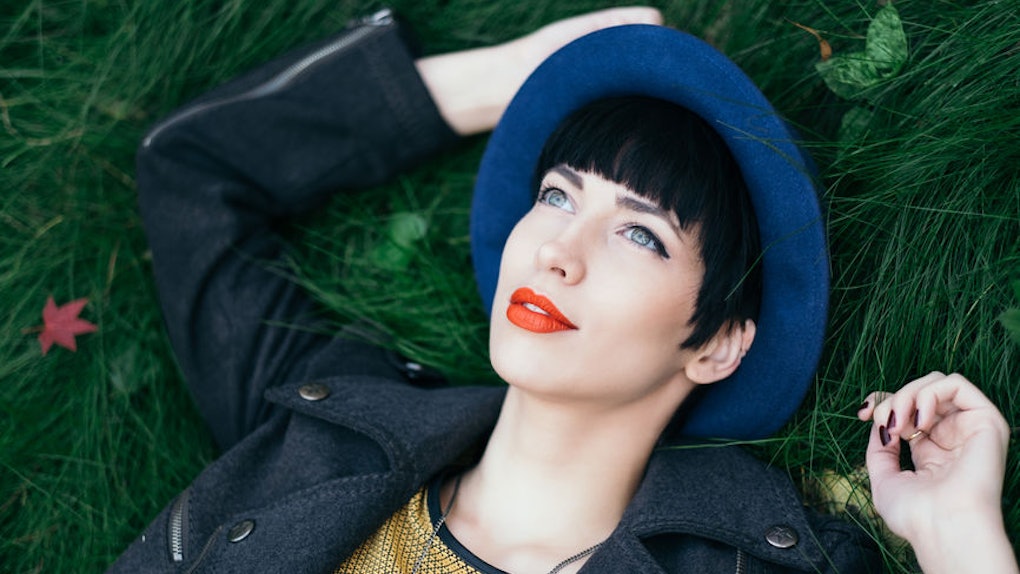 Is Thinking Nonstop About Your Partner All Day Long Normal? Here’s How To Tell

Most of us have been there: Your mind wanders at work, and you totally miss a chat from your boss because you’re daydreaming about the incredible make out sesh you had with bae. You absentmindedly start to cross the street (barely noticing oncoming traffic just in time) while obsessing about the local food festival you're hitting together this weekend. Later, you can’t concentrate on your philosophy reading for class because you keep replaying that hilarious thing they said the other day. Basically, you’re thinking nonstop about your partner — to the point where you’re wondering: Is this even healthy?

It turns out, it’s actually a pretty common phenomenon. In fact, people in love have admitted to spending an average of more than 85 percent of their waking hours thinking about their objects of affection, according to 2016 research led by Rutgers University anthropologist Helen Fisher. So you can rest assured that you’re not alone if you often feel distracted musing and fantasizing about your SO. Still, does that mean it’s normal or healthy to be so consumed with these thoughts? When should you be concerned? And is there anything you can do about it? Fortunately I spoke with two relationship experts, who weighed in on the subject.

“Oftentimes at the beginning of the relationship there is more excitement, fantasy, and uncertainty, so it’s normal to think about your partner,” says licensed clinical social worker Melanie Shapiro. In other words, it totally makes sense that this obsessive thinking is common when you start seeing someone. Amanda Ruiz, licensed professional counselor and founder of The Counseling Collective, adds: “As you are getting to know each other, you might wonder, ‘What's he or she doing now?” Or, you may be more concerned with when you will see them again, and so would text them to set up that time, then anxiously await that meet up and think about what you'll do together.”

This makes a lot more sense when you consider that the process of falling in love with someone actually changes your brain. At the beginning of a relationship, a flood of feel-good chemicals comes flowing in, which explains why you can’t seem to get enough of that person. One groundbreaking study led by Fisher and a team of researchers examined the brains of people in love via an MRI scan. Researchers found that when participants viewed photos of people they romantically loved (versus mere acquaintances), their brains became super active in the areas high in dopamine. To boot, regions of the brain that are associated with reward detection and expectation as well as the motivation to pursue and acquire rewards, showed notable activity. During the initial phase of romantic love, levels of cortisol (known as the stress hormone) tend to surge, explaining those racing hearts and sweaty palms. As cortisol increases, levels of serotonin decrease, and low levels of this neurotransmitter can trigger what Harvard Medical School psychiatry professor Dr. Richard Schwartz describes as “intrusive, maddeningly preoccupying thoughts, hopes, terrors of early love.”

So, how do you know when your obsessive thinking has moved into problematic territory? According to Shapiro, if your constant thoughts about your partner prevent you from doing your job, that’s likely cause for concern. Additionally, if you can’t engage with others in real time (i.e., you tend to tend to tune out while talking to friends and family) because your mind is constantly on your partner, that could negatively impact your other relationships.

It's important to note that there’s a difference between positive and negative obsessive thinking — anxiety-ridden thoughts about your partner or relationship are another red flag. “If you are thinking about your partner, appreciating the times you have together or thinking about something fun you did over the weekend, this is normal,” she explains. “But when you start to worry or become insecure, it changes your behavior and prevents you from enjoying your own life, and therefore is no longer mentally healthy.”

If you feel like your constant musings about bae are becoming an issue for whatever reason, there are steps you can take to reel it in. Shapiro recommends first assessing whether you’ve had these thoughts about previous partners and whether these obsessive thoughts are only specific to your relationships or whether you struggle with this in other areas of your life. Understanding these thought patterns better can help you to hone in on how to break them up.

When you can’t stop thinking about your SO, Shapiro recommends reminding yourself about when you’ll be seeing them next, whether it’s dinner that night or a concert that weekend. “Reminding yourself that you will have time to spend together in the near future may help you contain these thoughts and leave your mind open to focus on other things (ie. your job, family and friends) while you are apart,” she says. “Also, listening to a song or looking at (one) picture can be a reminder of your partner and help ease your thoughts.” She also advises setting some boundaries for yourself if need be — such as giving yourself permission to think about your partner on your coffee break and resolving to focus on your work assignment when you get back to your desk. “Allow yourself to have these thoughts but set limits so they don’t overtake your day will help manage your thoughts and feelings,” she adds.

The important thing to remember is that a relationship is a living, breathing thing that is guaranteed to evolve over time. Once you’ve been in a long-term relationship, it’s fairly likely that those obsessive thoughts will calm down. That doesn’t mean you’re falling out of love with them — in fact, it can be a good thing.

“Since your relationship is more secure, when you are apart, you are able to focus more on yourself, your goals, and needs,” explains Ruiz. “Differentiation means you know who you are independent from them and from being in a relationship. A strong sense of self develops, which will lead to a healthier well being and healthier relationship.”

As a general, rule, Ruiz says: “You shouldn't spend more time thinking about your partner than you do about you and your goals and plans.”

To recap, it’s totally normal to feel like your significant other is taking up a large chunk of your brain space, particularly in the early stages of a relationship. Of course, if it becomes concerning or begins negatively impacting other areas of your life in any way, you can also take steps to manage the obsessive thinking. If you’re wondering whether you’ll always be consumed with thoughts about your boo, consider this: studies have shown that as a relationship progresses into a long-term partnership, thoughts about one’s partner begin to activate brain areas associated with attachment more than those linked to obsessive thinking. That means you can get back to work, listen to your BFF’s bar story from last night, and focus on things other than the love of your life (phew!).