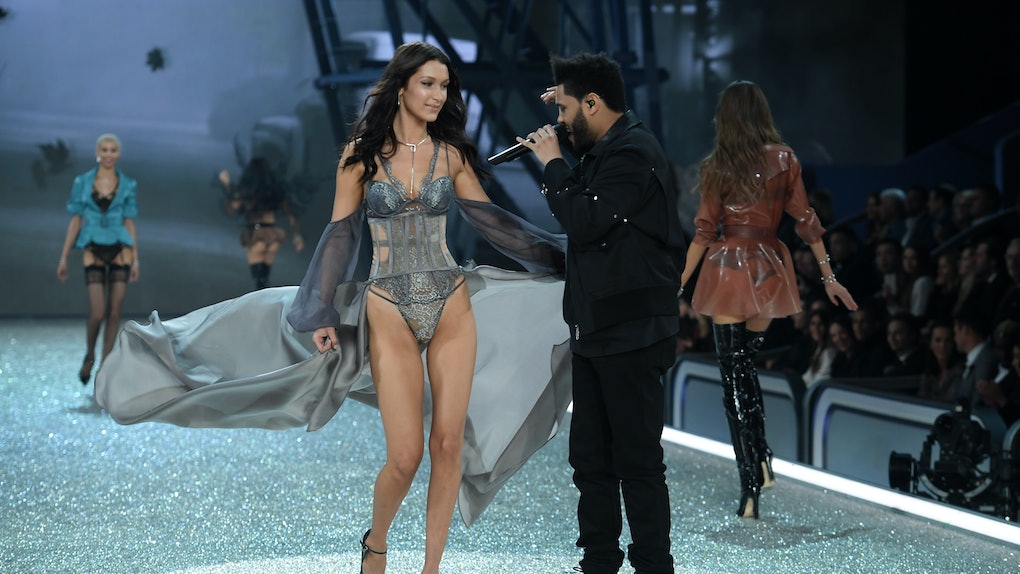 Is The Weeknd At The 2017 Victoria's Secret Fashion Show? Bella Hadid Fans Are Wondering

To begin, he's been low-key hanging out with his ex Bella Hadid who will be strutting her stuff on the catwalk once again this year. If you guys remember, the two broke up just before the 2016 Victoria's Secret Fashion Show after dating for a year or so. It was a big deal because the event marked the musician and model's first reunion since their split, and it all went down on national television.

Hadid glided by The Weeknd in a stunning silver look while he serenaded her, giving us some of the best photos of all time. Despite whatever personal problems the two were going through, they both handled themselves totally professionally and the performance went off without a hitch. The Weeknd stood in the center of the runway and sang "Starboy" while Hadid strutted her stuff and struck a pose for the camera.

For a moment, the world stood still.

Now, Hadid is back on the 2017 runway. She announced the news with a sultry Instagram photo and the caption,

@victoriassecret I am so excited!..!!!! Thank you @monica.mitro @10magazine @johndavidpfeiffer and of course the wonderful, incredible @ed_razek + everyone on the team for making this dream come true again.. I feel so crazy humbled to get the opportunity to be a part of this show again...Walking into the offices this year i felt so happy, healthy, and honored.. I can't wait for another incredible experience!!! Congrats to all of the beautiful ladies I will be walking beside. I can't wait! Xx

Of course, eagle-eyed fans are scanning the show for signs of life from The Weeknd.

We're particularly interested in what's going on between the two since photos leaked of the singer walking out of Hadid's home earlier in November. The Weeknd had literally just broken up with his latest girlfriend, Selena Gomez, making the pictures even more suspicious.

After dating Gomez for ten months, their relationship came to a sudden end with sources blaming their hectic schedules for the split. Almost immediately, The Weeknd was videotaped dancing with another girl at a club, hanging out with Justin Bieber's ex Yovanna Venture, and then slipping out of Hadid's New York City apartment.

Neither Hadid nor The Weeknd have commented on the status of their relationship, but common sense says they aren't hanging out just for sh*ts and giggles.

When they first broke up, Hadid admitted to Teen Vogue,

When I love somebody, I love them with my whole heart. It was my first breakup—or second, next to the horse—and so public... As an outsider, you might think I handled it so well, but it's always in your heart, and you always feel it very heavily.

Now that they've been spotted back together, a source told E! that The Weeknd made the first move. The insider said,

Abel reached out to Bella asking to hang out and catch up, and she decided to see him and see where things go. She knows that if they don't date again, they can at least be good friends.

He has expressed to her that he loves her still, and they will always have a real connection. He also apologized for hurting her in the past.