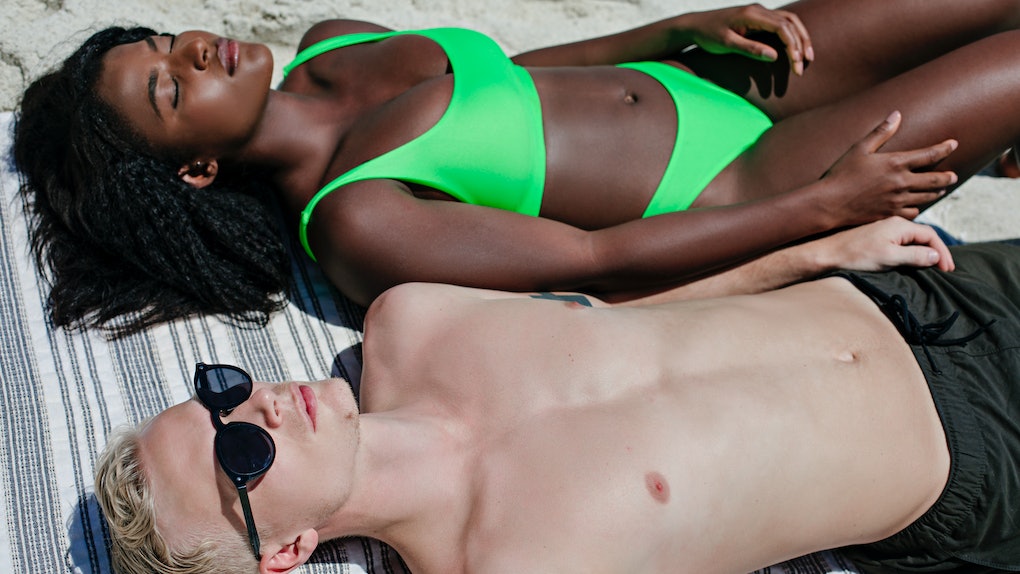 If Your Relationship Is Running Out Of Time, You'll Notice These Red Flags

I can usually tell when my relationships are ending. Mostly because the breakups last anywhere from two to six weeks and my partner and I stop texting each other, but also because of smaller signs (for example, if a person I'm seeing tells me "this is over," I get the hint that it might be over soon). In all seriousness, though, there are a few signs that a relationship is running out of time, and you might want to be aware of them. These are just warnings, so if you notice that any of these signs are true for you, that doesn't mean your relationship is definitely going to end, it's just something to keep in mind. I spoke with experts on how to tell a relationship is running out of time.

According to the experts, your sex life could also provide hints that your relationship is running out of time. "Recent sex has had a desperate quality about it, as though each time may be the last time," Dr. Gary Brown, a prominent couples therapist in Los Angeles, tells Elite Daily. "You don't have any sex or no longer feel emotionally connected to your partner when you did make love." It's normal to go through periods of having more or less sex, but if you are feeling less emotionally connected to your partner during sex, it might be a good idea to speak with them about why.

If you start to avoid spending time with your partner, experts say that it could mean the relationship is coming to a close. What are the signs that you're avoiding your partner? "You dread spending time together," Licensed Marriage and Family Therapist Nicole Richardson tells Elite Daily "You start making plans that do not include or consider your partners and/or their needs." It could also be that your partner is avoid you. "They are not arguing or appear mad, but rather they are doing more and more things on their own," Dr. Joshua Klapow, Clinical Psychologist and Host of The Kurre and Klapow Show, tells Elite Daily. "They don’t ask you, they don’t check in with you, they simply go at it alone. They seem to schedule their life differently." It's completely normal and healthy to make plans without your partner, but if you're also avoiding making plans that do include your partner, your relationship might be in trouble.

A lack of effort to communicate means the relationship could be on its last legs. Fortunately, a willingness to communicate despite problems and fights might signal that the relationship is going through a bumpy phase, but is ultimately healthy. "If you both are willing and able to listen, ask questions and take responsibility, there is a lot of good stuff there," Richardson says. "When there is criticism, contempt, defensiveness and stonewalling, your relationship is in a real crisis and will require that both of you dig deep to turn things around." Dr. Brown echoes her sentiments. "You don't even bother arguing over important differences," he says. "There use to be a genuine caring for each other - and now there is nothing but apathy or worse, complete disdain." Even if the two of you have been fighting regularly, an ability to listen and work through the fights means your relationship can survive. If you find you are no longer able or willing to communicate with your partner, it could be because it's not the right relationship for you.

If your fights are turning toxic, that could also mean the relationship is running out of time. Non-toxic fighting is totally normal, especially if one or both people in a relationship are going through difficult times in their personal lives. How do you know if your fight is non-toxic? "Perhaps there are stresses at work, school, a recent trauma, or other external demands are putting pressure on one or both of you," Dr. Brown says. "But overall, you still love one another, appreciate one another, look forward to being with each other, and generally trust that despite the current bumps in the relationship road, that you are still optimistic for your future together." If the fighting doesn't have this quality, and you don't feel optimistic about the future, then your relationship might be on its last legs. "Arguments that repeat themselves, that happen over and over with no resolution become a toxic drain on the relationship," Dr. Klapow says. You don't ever have to stay in a toxic relationship, so be aware if the fights are making you feel like the relationship has become unhealthy.

It's totally normal for relationships to end — it doesn't mean there's anything wrong with either of you. You can learn a lot from relationships, and even if yours is running out of time, it doesn't mean it wasn't worthwhile. If you notice any of these warning signs and you do want to fix your relationship, you definitely still can if you communicate with your partner. And if not, there are wonderful things ahead of you even if this relationship is winding down!