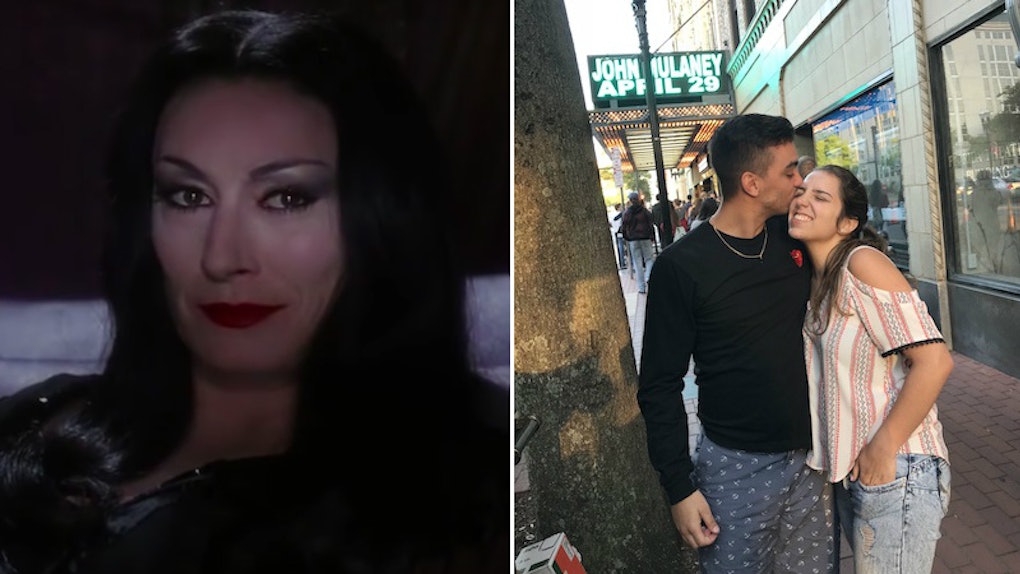 Fall is here, my friends, and I'm ready. My religious intake of PSLs has begun, I'm searching high and low for those frozen, pumpkin-faced sugar cookies that seem to somehow disappear from every grocery store before the season even starts, and my Friday nights are exclusively reserved for Halloween movies. This year, I started with The Addams Family, and let me tell you: Gomez and Morticia Addams have some serious game. And seeing their exchange of witty lines made me wonder how my boyfriend would react if I flirted like Morticia Addams for a week. Would he find it amusing? Would he even notice anything out of the ordinary? We are pretty flirtatious on the reg, but Morticia Addams is definitely next level.

To see if I could pull off Morticia's iconic lines, I vowed to text my boyfriend, Alejandro (Ale for short), one or two of her smoothest, most clever lines a day for a whole week (without his knowledge, of course). I started with one of Morticia's more subtle lines and worked my way up to some that were a little more "out there." Surprisingly enough, his replies remained relatively the same, despite how, um... intense the lines got near the end of the week.

A few disclaimers: We're one of those obnoxious couples who have eight different conversations at once, so don't be alarmed by the big blobs of text. I also had to tweak a couple of Morticia's lines a bit to ensure they really made sense in the context of our relationship. Warning: You may cringe. We really are that cheesy on the daily.

I started the week off with Morticia's most low key line. Ale and I are long distance at the moment, so once a day, we typically say, "I hope you have a good day," or "Good luck at work today, baby." On day one, I used Morticia wishing Gomez well as my, "Have a good day." To my surprise, he loved it and now expects me to call him "darling" on the reg. So, I guess we can add yet another pet name to our arsenal.

At the beginning of the experiment, the lines I was using weren't too wild, so I wasn't too nervous. I figured he'd be a bit confused, but considering we flirt a lot, I didn't think he'd be too caught off guard. I thought Ale's reply to this line was precious, and it definitely wasn't what I was expecting from him. As cringeworthy as his complete shut down of my torturing him was, I couldn't help but smile. Sue me.

Day Two: "Oh Gomez, It's Been Hours Since We've Waltzed."

This was one of the first lines I tweaked a bit. In The Addams Family, Gomez asks Morticia how long it's been since they've waltzed, and she says "hours." I thought it would be a cute line to use on Ale, but I was worried if I said something as random as, "It's been hours since we've waltzed," he'd be like, "Huh?" So, I tried to play if off as dang autocorrect, but it didn't exactly work. I also totally forgot that we actually had waltzed recently, so his reply was surprising. A few weeks before, Ale and I went to dinner with my family at a hotel in Miami. After dinner, all 12 of us wandered around and came across an open ballroom. Somehow, we ended up waltzing on the dance floor in the middle of an empty, way impressive ballroom. We're normal! Promise!

During days three and four, Ale and I were in Disney for the weekend with a couple of friends, so I had to say my lines IRL. I'm way more comfortable behind a phone screen than I am in person, so saying one of these lines instead of texting it was terrifying to me. In order to be able to actually get the words out, I stuck to the simplest Morticia lines I had up my sleeve. I kind of just blurted this out of nowhere, and Ale was super lost because he clearly did not have goosebumps. He looked at me confused AF and kind of laughed it off saying he didn't have any. Flirting in person: 0. Embarrassment: 1.

I admit it: I am a Morticia line repeater. But again, I was nervous, y'all! Cut me some slack. Sunday morning, Ale went to go get breakfast, while the rest of us waited in line for a ride. Before he walked away from us, I grabbed his hand in true, cheesy, rom-com form and said "Darling, take care." He smiled, said he would, and went off to find food. Simple, yet cute.

Day Five: "I couldn't stop staring at you all through the eulogy. Your eyes, your mustache, your laugh."

This was hands down Ale's most cringeworthy reply, but also his most adorable. I had to tweak this line too, so that it made sense, but the gist of it was there. A bit of backstory: Ale hadn't been to Disney since he was about five years old, and that's a long time when you live in Florida. Disney's changed a lot since then, so he was in complete awe all weekend. It was precious, and that's why I said I couldn't stop staring at him. You know how little kids react when they go to Disney for the first time? Imagine a 21-year-old man with that much excitement.

Day Six: "A day alone, only that would be death. "

As the end of the experiment was approaching, it was time to bring out some of Morticia's more hardcore lines. This was the first really weird one I dropped, and understandably, it caused some confusion. With the previous lines, Ale didn't question where my newfound smoothness came from, so I wasn't expecting him to ask questions this time. When he did, I had to think of something on the spot to make sure I didn't blow my cover. There were still two days left of the experiment! But even with all my effort to hide what I was doing, I think he finally started to notice something was up.

Day Seven: "You're dearer to me than all the bats in all the caves in the world."

Alright, you caught me. This line isn't from The Addams Family film, it's from the TV show, but it's still one of Morticia's smoothest. While I did text this to Ale, he responded to it in person because I was visiting him for the week. He said, "Hey, that was a really cute message you sent me about the bats." So, I guess he just expects me to say things as far-fetched as this? Should I be concerned?

Day Eight (Part One): "Last night you were unhinged. You were like some desperate, howling demon. You frighten me. Do it again."

I have to admit, I was definitely expecting more from his reply to this particular message. We had had a pretty ~fun~ time the night before since I was still in town, so this line made total sense. But apparently Ale just thought it was deep. Ugh, boys. Hello! I'm trying to be sexually flirtatious here, not "deep." (At least, not that kind of deep, if you catch my drift.)

Day Eight (Part Two): "Some day we'll be buried here, side by side, six feet under, in matching coffins, our lifeless bodies, rotting together, for all eternity."

This was by far the scariest Morticia line I sent him. I have an issue when it comes to telling anyone we're going to be in each other's lives forever, because that's like, a really long time. But it was the last day of the experiment, so go big or go home, right? I sent it, and his reply was as goofy as I could've hoped. Thankfully, he didn't make me feel like I freaked him out in anyway. Apparently, he just thought my eighth grade angsty self was shining through, but hey! I'll take it. It's better than him thinking I was already planning our matching coffins.

On the last night of the experiment, I was still visiting him at school. When he got back from work, he asked me what I was working on, so I turned my computer around for him to see. It was this essay, and when it clicked in his mind, he started cracking up! He told me he had never seen The Addams Family, so he really just thought I was being cute at the beginning and then sending him random quotes later on.

I'm convinced that if I hadn't started using some of Morticia's more far-fetched lines, Ale wouldn't have suspected a thing. It would've been just another week in our relationship, which to me feels sweet. I'd definitely find it weird if someone ever sent me the texts I sent him, but he didn't, and that tells me more about our relationship than I ever thought this experiment could. We're cheesy! We're goofy, we still flirt like we did at the very beginning, and a whole year later, I still love every little bit of it.