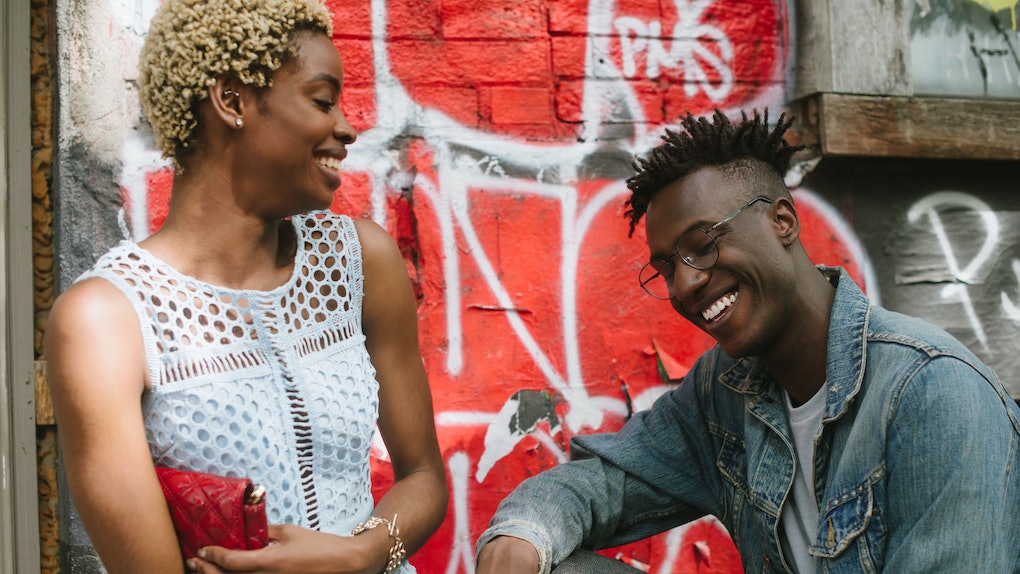 6 Tips For Approaching Your Crush IRL, According To A Dating Coach

The rise in popularity of dating apps has significantly reduced the pressure that used to placed on only meeting people IRL. But, as a result, some folks have become much worse at flirting with people in person. What happens when you really want to talk to that cutie in front of you in line at the coffee shop? Or the really stylish person holding your favorite book, sitting across from you at the bar? Never fear, internet fiends: There are still numerous ways to learn how to talk to your crush in real life, as opposed to just swiping right.

There's good news — if your crush already likes you back, all you need is an icebreaker to get the conversation started. Even if your casual chat at a bar about what your crush is reading doesn't lead to a date, you should be proud of yourself solely for taking the risk! Keep in mind that just because someone doesn't pick up a conversation, doesn't necessarily mean that they are personally rejecting you.

I asked dating coach Erika Ettin to provide readers with tips for confidently approaching someone in person. Her advice is sure to help you strike up a conversation with someone swoon-worthy.

1. Say Something Relevant To The Situation

Ettin's main tip when it comes to approaching people is to ask a question that is relevant to the situation. She explains, "If you're in line at a coffee shop, for example, ask the person, 'Is the salted caramel hot chocolate good? I've never had it.' Talking about something related to your setting makes for smoother transition." When you think about it, this makes complete sense — if you start with, "So where are you from?" when in line at the grocery store, the person you're directing the question at will likely not answer.

When it comes to conversation starters, sometimes the more trivial a sentence sounds, the more effective it is.

While this may seem like a no brainer, Ettin encourages people to avoid corny pick up lines. Although they can sometimes be effective, more often than not they can lead to awkward conversations. Pick up lines can also be interpreted as insincere, because they are so widely syndicated. Some people might not take them seriously because it can seem as if you did not care enough to come up with something original.

Going from not talking to someone, to saying something like, "Did it hurt when you fell from the sky?" will likely make your crush feel like you're not serious about getting to know them.

In the era of pre-internet dating, clinical psychologist and professor, Dr. Chris L. Kleinke conducted a study that explored different forms of approach one can use when talking to a stranger. Psychology Today notes that overall, the research revealed that both men and women think pickup lines are the least effective way to ask someone out. Even if you can't come up with a relevant question, retire your one-liners in favor of a simple one-word greeting.

3. Start By Talking To The People Near Your Crush

Another way to transition into a conversation with someone cute is by taking into account your surroundings. If you're at a bar or a party with a lot of people, start talking to those around you — even if you're not interested in them romantically. Once you get used to talking to new people who you're not attracted to, you may feel less nervous about approaching your crush.

"By the time you get to the person you like, you're 1) warmed up, and 2) just seem like the friendly person who talks to everyone," Ettin says. An even better version of this trick is to start by talking to the person of interest's friends. That way, they might organically join in the conversation all on their own.

Beware of hovering — it has the potential to seriously freak people out. Ettin explains that lurking or creeping can make a person uncomfortable. Most people can sense when a person is silently hovering near them, and they can take it as a signal to move far, far away. Even if you don't mean to be creepy, you never want to make someone feel unsafe.

On a related note, be sure to pay attention to what this person is doing. Do they seem like they want to be alone? For example, if your crush is the barista at a cafe, keep in mind that they are working and are most likely extremely busy. If they seem open to talking, you can consider striking up a conversation, but be sure to respect their personal space.

5. Practice With Your Friends

The struggle to approach people in public is so real. Ettin suggests trying an exercise she does with clients. She explains: "My client has to ask me questions, and I can only answer and not ask questions back. That way, the client has to be on his or her toes."

This is totally something that a willing friend could practice with you. She goes on to say, "I also practice casual hugging with my clients (nothing worse than a bad hug)." In this case, I guess practice really can make perfect!

6. Trust Yourself And Remember That No One Will Judge You For Trying

Remember that as long as you're respectful, it's unlikely that you'll be judged for innocently introducing yourself to someone. "It can be difficult to approach a stranger and start a conversation," Ettin explains. "Just remember that no one can shame you for trying, even if you don't get the response you're looking for." Treat every encounter as a learning experience!

Keep in mind that the very person you're so nervous to talk to might be feeling the exact same way about approaching you! So many people struggle with shyness, and talking to strangers can be so difficult. Be kind to yourself, know that you have a lot to offer. The next time you see a cutie in public — put your new skills to the test. There's no shame in taking a risk!