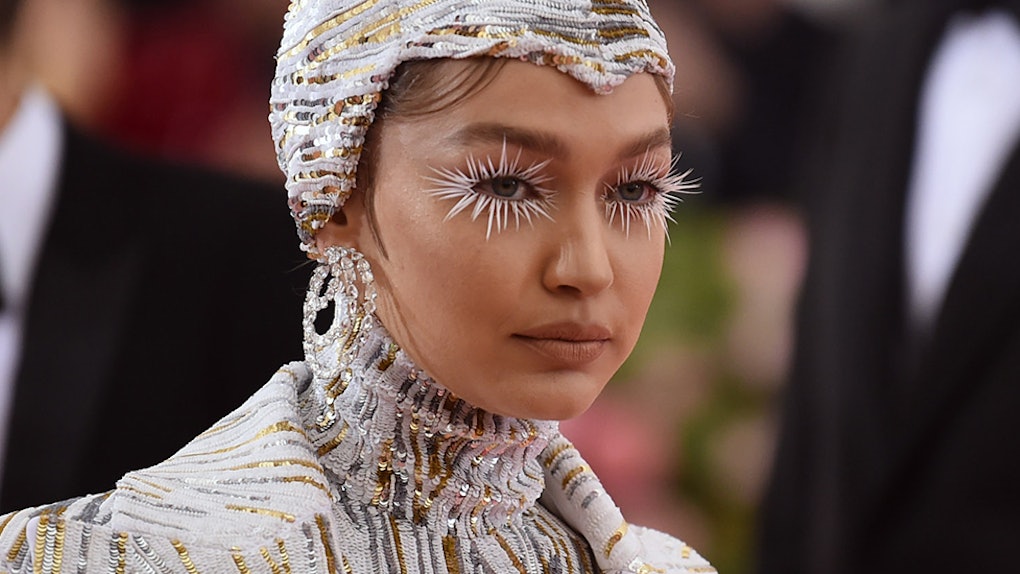 Few of the trends born from a Met Gala theme as outrageous as camp can be defined as "wearable," but that doesn't mean they aren't fabulous. Exhibit A: the huge false lashes at the Met Gala, worn by basically all my fave celebs — I don't see myself going quite as over-the-top as they did, but their luxe lashes definitely have me wanting to step up my falsies game this summer. Gala host Lady Gaga, supermodels Sara Sampaio and Gigi Hadid, and actresses Lupita Nyong'o and Lily Collins really took statement lashes to the next level on the pink carpet, and each put their own unique twist on it on the trend, so no two lashes were the same. Well, technically, no two pairs of lashes were the same. You get what I'm saying. Let's cut to the looks.

It feels wrong to start with anyone other than Lady Gaga, as her four-looks-in-one were expertly complimented by ornate, metallic lashes. Gaga's go-to makeup artist, Sarah Tanno, did her makeup using Marc Jacobs products, and decided a larger-than-life lash would be the perfect camp finishing touch. Complimenting glitter, rhinestone gems, and some graphic winged liner, strips of gold foil created oversized lashes that stemmed from both Gaga's upper and lower lashlines.

They brushed up against her bangs and skimmed her nostrils — they were huge, to say the least.

I don't recommend DIYing your own foil falsies, but if you're into the pop of gold, try the Sugarpill Cosmetics False Eyelashes in Glitzy ($7, beautylish.com) for your own metallic moment:

Another personal fave? Gigi Hadid's white hot lash look. While I daresay her Michael Kors sequined Liberace and Cher-inspired jumpsuit missed the camp mark for me, her lashes were on point. Makeup artist Erin Parsons was responsible for Hadid's beat, and used Maybelline products for an understated, monochromatic nude look, so that the lashes could really have their moment. On her Instagram, Parsons was quick to share the deets: "They looked spiky and dangerous but were literally and physically light as a FEATHER!" she wrote of the white falsies on Hadid.

"I created the lashes using a few feathers that I cut and then individually applied one at a time," she explained. A job well done:

If you're into not just a bold lash, but a statement eye overall, Lupita Nyong'o's look was probably your fave. The star's drag beauty look was done by makeup artist Nick Barose, and while the lashes themselves weren't necessarily dramatic, they had to be bold enough to stand out against a background of metallic glitter. "For the Met Gala Camp theme, we drew inspiration from camp icon Divine from some of my favorite John Waters movies,” said Barose in a press release from Lashify, the brand he used to ensure Nyong'o's lashes were on point.

To build up her lashes, Barose opted for the Lashify C Gossamer Lashes ($20, lashify.com), and you can wear these curly babies whether or not you're creating a full-on campy eye look:

If you're trying to up the ante, though, Lily Collins' spiky black lashes were no joke. Talk about volume! Makeup artist Fiona Styles glammed Collins using Lancôme products, and knew a huge lash would be key in balancing out that massive head of hair. "The hair had a very Priscilla Presley/Sharon Tate vibe, so I played off of that with the makeup," said Stiles in a press release from Lacôme. "A flat, matte pastel lilac on the eyes with wickedly dramatic liquid liner was a great backdrop for layer after layer of false lashes," she insisted.

Someone get me a thick lash and a lilac shadow, stat:

In particular, I'd love to use the KISS Lash Couture Triple Push-up Lash in Brassiere ($7, kissusa.com) for a similarly lush yet spiky look:

Last but not least, the other fab set of falsies on the carpet belonged to the eyes of Sara Sampaio, whose lashes featured feather-tipped accents. Camp. Makeup artist Kelsey Deenihan was responsible for the look, and honestly, it was one of my favorites of the night. Sampaio's dress was not very camp, so her bejeweled part and strong eye makeup game definitely saved her from in the end.

Camp is all about the details, people!

I don't know what lashes Deenihan used, but the Inglot Cosmetics Decorated Feather Eyelashes in 29F ($14, beautylish.com) have a very similar vibe:

Whether black, colorful, or metallic, be they fluffy, feathery, thick, or spiky, statement lashes are definitely a trend on the rise. You don't need to go full camp this summer (But you can if you want to!), but I'd highly advise stocking up on at least few bold pairs of falsies the next time you refill your lash stash. I'm not the only person with a lash stash, right?

More like this
How To Get A Trendmood Box, AKA The Next Big Thing In Beauty Box Subscriptions
By Bella Gerard and Theresa Massony
These Asian-Owned Beauty Brands Are Creating The Products You'll Use Forever
By Margaret Blatz
Jackie Aina Is Cutting Ties With Morphe — Here's Why
By Margaret Blatz
Stay up to date