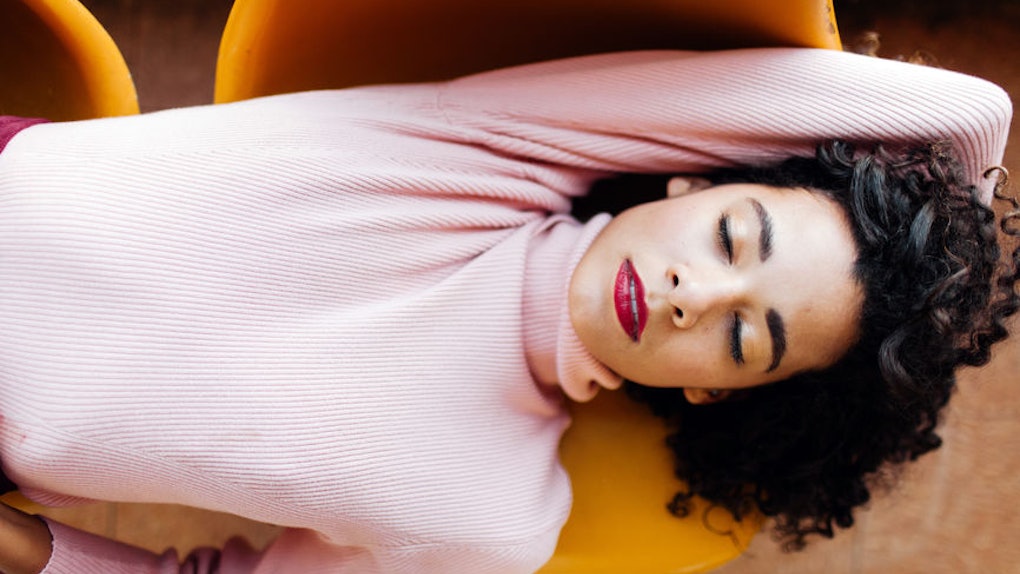 How To Tell If You're Asexual, According To Experts

“You probably just have a low sex drive.” “Oh, so you’re conservative where sex is concerned?” “You just haven’t met the right person yet.” When I asked people on Facebook who identify as asexual to share the most frustrating comments they’ve faced when talking about their asexuality to others, these are just a few of the most common responses. More often than not, the "A" in LGBTQIA+ is left out of the conversation, and as a result, there are a plethora of persisting myths and outdated assumptions surrounding asexuality. That means, if you’re wondering how to tell if you're asexual, it can be pretty difficult to know which feelings or thoughts (or lack thereof) to pay attention to, explore, or ask an expert about.

So, let’s start by clearing up what asexuality isn’t. For many years, it was confused with merely "having a low libido," or abstaining from sex — when in fact, it's neither. According to the Asexual Visibility and Education Network (AVEN), the definition of being asexual is “someone who does not experience sexual attraction or an intrinsic desire to have sexual relationships (or the adjective describing a person as such).” A few other things that asexuality is not, as defined by AVEN: a choice, a disorder, or the result of a hormonal imbalance.

According to Gay & Lesbian Alliance Against Defamation, asexuality exists on a spectrum. In other words, asexual people can experience varied levels of sexual attraction and romantic feelings. Demisexuality, a term coined by AVEN, refers to those who fall somewhere in the middle of the spectrum in terms of experiencing sexual attraction. Those who identify as demisexual (also known as graysexual) are often sexually attracted to people only under very specific circumstances, such as after getting to know them to a certain extent.

“Asexuality is a complicated concept, and there’s no catch-all sign that someone might be asexual,” GLAAD Campus Ambassador Morgan Pasquier tells Elite Daily. “Every person’s experience is different.”

That said, there are several signs that may suggest you’re asexual.

For instance, if your friends are all excitedly discussing the sexual escapades they’d like to have with their crush — whether that’s a cutie from chem class or Chris Hemsworth — and you’re struggling to relate, that’s one sign to pay attention to, according to Pasquier. In fact, it was this inability to relate to friends when they discussed their sexual fantasies and desires that made Pasquier aware of their own asexuality.

“For me, it started with the Jonas Brothers, and later, Justin Bieber,” they add. “Yes, they were nice to look at, but I couldn’t comprehend my friends’ desire to date or marry them.”

“One way to understand this is to think about something else aesthetically attractive, like flowers,” they explain. “I enjoy how a bouquet of roses looks, but I have no interest in, say, kissing them.”

Still, just because you're asexual doesn't necessarily mean you don't ever fantasize. In fact, a 2017 study of 354 asexual individuals, which was published in Archives of Sexual Behavior, found that three-quarters of asexual men and half of asexual women have sexual fantasies that pop up in their thoughts and dreams.

If you only feel like you’re only ever sexually attracted to someone once you’ve gotten really close to them, that’s another common sign of asexuality.

“I don't feel attraction for anyone (regardless of their appearance) except the very few times when I’ve developed a strong emotional bond with someone and shared a lot of common interests," Tania Sánchez, who identifies as asexual, tells Elite Daily.

Note, however, that the experience of sexual attraction can vary vastly for asexuals.

“After analyzing my sexuality and the labels within the asexual spectrum, I feel very comfortable identifying as graysexual," says 27-year-old Via Perkins. "Sometimes my sexual attraction grows as I get to know someone I’m interested in, but other times it’s instant upon first seeing or meeting someone.”

One major misconception is that asexuals don’t experience love or related feelings. In fact, a 2012 study published in Group Processes & Intergroup Relations, which explored biases against asexuals, revealed that asexuals are viewed as not experiencing as many human emotions as other groups. "This is not true,” says Pasquier. “Asexuals may fall in love and pursue relationships, or not. Regardless of their romantic status, asexuals can still form deep and lasting bonds with people, start families, and experience the full range of human emotion.”

Another sign you may be asexual is if you’ve never been very interested in sex, no matter with who. Pasquier notes that sex may feel “less like an exciting thing for you — and more like a chore.”

“If you’re in a relationship with someone who is not asexual, and having sex is important to them but you don’t feel the same interest, you may be asexual,” they explain. “Having sex because you feel it’s something you ‘should’ do, rather than something you want to do, is a pretty big indicator.”

No one should ever have sex out of a feeling of obligation, so if you're going through the motions just to please your partner, it's time to have a talk. If they're a supportive significant other, they'll want to make sure you feel comfortable and aren't continually compromising your own sense of self just to satisfy them. AVEN representative Kelsey L. says that choosing the right time to have this conversation depends on the nature of the relationship and the situation.

“You should do it when you feel confident and comfortable,” they add. “And that can be right away, or it can be a bit down the line when you’re absolutely sure that you’re asexual. It might take some time before you're ready to talk about it, and it can also depend on how close you and your partner are. It's always good to share resources with them if you decide to talk to them about it to help explain, or to even offer support for them if it's difficult, too.”

AVEN also has a forum for sexual partners, friends, and allies where one can get support in that situation as well.

Perkins adds that there is no rush in terms of making a decision about sexuality: “You always reserve the right to take your time, and to go at the pace that feels right for you — I feel like my sexuality has always been and will always be evolving, as are all aspects of our identities.”

To be clear, that doesn’t mean that all people who identify as asexual abstain from sex entirely — in fact, according to Pasquier, that’s one of the most common misconceptions surrounding asexuality. While celibacy is a deliberate choice to abstain from sex, asexuality is not — it describes a lack of experiencing sexual attraction.

So, if you suspect you're asexual and hoping to learn more about it, what are some resources you can turn to? Pasquier has published an array of literature on asexuality, including a piece on the diversity of asexual and aromantic identities and another discussing the broader context of asexuality inclusion in LGBTQ advocacy. They also recommend checking out AVEN if you're questioning your asexuality, as it’s one of the largest online resources for asexuals. The Asexuality Archive, a forum with a wealth of educational information on asexuality, includes "101 Guides on Possible Signs of Asexuality" and an "Asexual’s Guide to Having Sex," as well as a Q&A section called "Ask an Ace Guy." The Asexual Agenda is another stellar source that boasts a number of contributors who share their expertise and perspectives. It also serves as a portal to other asexual blogs and a place for asexual readers to discuss with each other. Demisexuality.org features a number of educational guides, including "Coming Out as a Demisexual and Dating as a Demisexual." It’s also worth checking out the informative Netflix documentary, (A)sexual, which explores the asexual community.

As Pasquier points out, everyone’s experience of asexuality is different, which means everyone’s experience of discovering their asexuality is, too. Someone else’s journey of realizing that they’re asexual or demisexual may not look like yours, and that’s totally OK. The more you can educate yourself on the wide spectrum that asexuality encompasses in terms of degrees of sexual attraction, and the more perspectives you can read or hear on what it means to be asexual, the more you’ll find that asexuality can exist in a vast variety of different forms. Being asexual doesn’t necessarily mean fearing or rejecting sex, intimacy, or love altogether, it simply means you experience sexual attraction and desire in a unique way — and that's a beautiful thing.