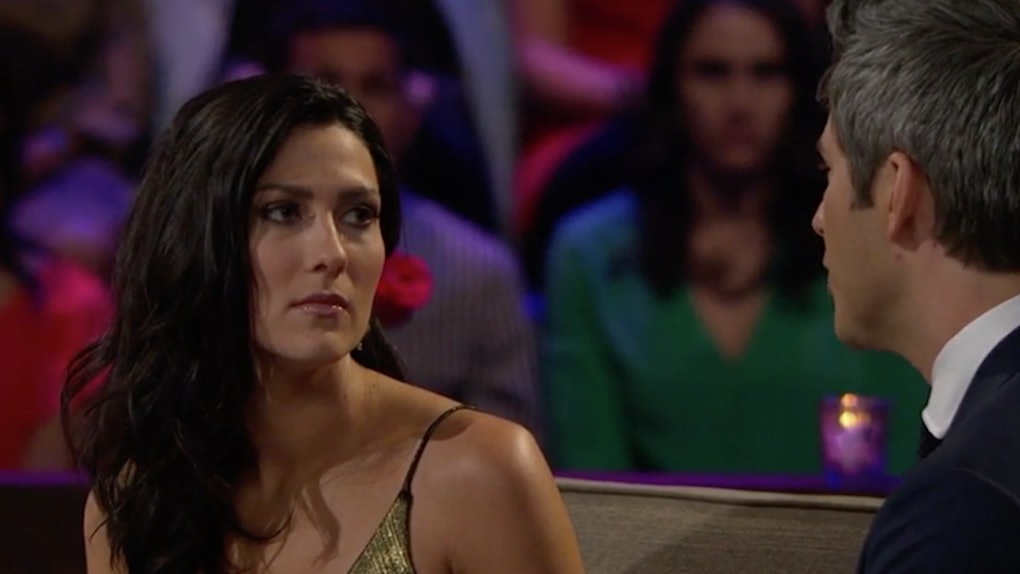 Now, more than ever, we could all use a refresher course in how to break up with someone nicely. "Why?" you ask. Well, because if you're a part of #BachelorNation, you know what an insensitive breakup looks like. In fact, all 7.8 million viewers who tuned in to the Season 22 finale of The Bachelor were schooled on what not to do when you break up with someone.

Um, like maybe don't show up unannounced with a camera crew in tow and bombard your new fiancée with a surprise breakup. Definitely avoid verbalizing selfish garbage like, "It kills me to see you like this but I'm so sorry.... I just want you to be able to move forward and know how I'm feeling." Oh and most importantly, don't linger after they ask you to GTFO. And if you have to propose to the woman you left your ex for, maybe don't do it in the same TV studio your ex is sitting in.

Arie's breakup with Bachelor contestant Becca was cringeworthy for everyone watching and screaming in agony from their sofas, which means it was only about a million times worse for Becca. Romeo and Juliet might have killed themselves for love but I think Arie and Becca's breakup will forever go down as the most tragic love-story ending ever from this point forward.

As for the rest of us — who aren't out here exploiting other people's emotions on national television for money and fame — I asked Lori Salkin, dating coach and senior matchmaker at SawYouAtSinai.com, for tips on how to break up with someone like a decent human being. Believe it or not, the goal isn't to figuratively rip their heart out and stomp on it maniacally.

So basically, don't pull an Arie. Try these three tips instead.

The most annoying thing about Arie's breakup was how elaborate he tried to make it, rather than committing to a simple, private moment between him and Becca. Breakups are tough enough already. There can be so many emotions involved, so many questions, and so much to get off your chest. It's easy to get carried away in the breakup discussion but it's not wise or helpful for that matter.

Salkin says, "There is no need to stand on a soap box and lecture someone, tell them that you disagree with all their world views, aren't attracted to them, or doubt their character."

*Clears throat.* What she's trying to say, Arie, is that there's no need to make a spectacle of the breakup or to make sure you really drive your points home (read: drive the spear into your former partner's heart).

Share with them, in a polite and considerate way, why you feel like the relationship is no longer right for you and wish them the best. Literally, that's all it takes. Don't nitpick. Don't criticize. Don't assign blame. And then get out.

Validate The Other Person's Feelings

Oh Arie, Arie, Arie. Just like the relationship, your breakup isn't all about you or at least, it shouldn't be. In as much as you set out to explain why you want to break up, remember to consider their feelings as well.

You have spent time with this person, made memories with them, and cared for each other. Salkin says, "Validate the other person by letting them know you've truly enjoyed getting to know them." You might also tell them what you appreciate most about who they are if you like. But making them feel validated isn't just about telling them what you think of them. Give them an opportunity to respond to the breakup and acknowledge and respect their feelings about it. Remember that it's perfectly OK for them to be upset or sad.

Don't use this opportunity to bully them into agreeing with you about why the relationship should end. As the person doing the breaking up, you have had time to process your emotions and come to terms with the end of your relationship. They have not.

Give The Breakup the Time It Deserves

Speaking of time, find a balance between rushing through the breakup and prolonging it unnecessarily. Salkin says the best way to do this is to make the time spent on your breakup proportionate to the length and seriousness of your relationship. For example, if you have only been dating for a few weeks, breaking up might be a relatively quick encounter, maybe even a phone call.

If, however, you have been together for months or years, you owe it to your partner and to your relationship to spend some time on the breakup. Let them know what the relationship has meant to you and how much you have cherished the time you spent together. If they have questions, try to answer them as honestly as possible without being cruel. You probably won't be able to get closure right then and there but you should be able to talk to each other about what is happening.

Of course, it should go without saying that if they ask you to leave, you should leave. The absolute best way to avoid hurting your former partner's feelings is to respect their needs in this difficult moment. Arie!