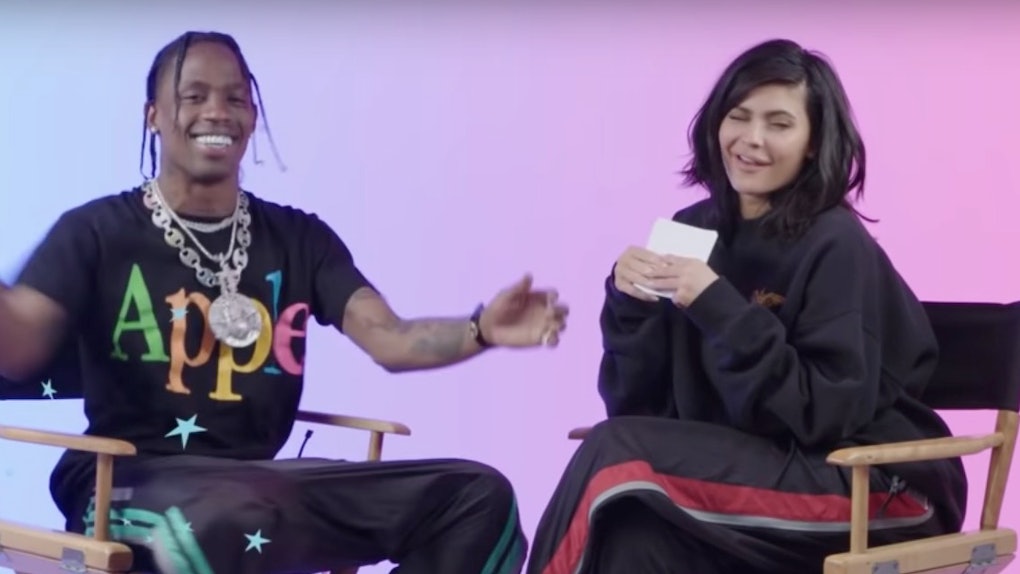 How Did Kylie Jenner & Travis Scott Meet? Kylie Thought He Didn't Like Her For An LOL Reason

Real talk: I was always a little bit weary of Kylie Jenner and Travis Scott's relationship. But hear me out on this one, because it's not for a particular reason — it was pretty much because I never got to see the two of them interact. Sure, there were some paparazzi photos of them, and little blurbs here and there about their relationship, but I felt like I didn't really know them as a couple. But that all changed when I saw GQ's video of Kylie interviewing Travis about how well he knows her, because he basically crushed all of the questions AND proved just how well these two really do know each other. They touched upon some pretty personal subjects, and even described the beginning stages of their relationship, and let me tell you, I am now SMITTEN over their love story. So how did Kylie Jenner and Travis Scott meet? We got to hear the full story and it's honestly the most adorable thing you'll hear all day.

GQ's video, published on July 17, is 12 minutes of pure perfection, but my absolute favorite moment was when Kylie asked Travis if he remembered the story of how they first met.

"Where did we first meet? We still don't know this answer," Kylie tells the camera.

Travis responds, saying, "It's a lot of link-ups."

Realizing she forgot to add the second portion of the question, Kylie adds, "Oh, where did we first meet and what did I first think of you?"

"Well, you thought I didn't like you," Travis said.

RECORD SCRATCH. Hold up. What?

Is it even possible to believe that Kylie thinks that anyone doesn't like her? How is that even a real thought?

Well, apparently it is a real thought, and that's exactly what she felt when she was first introduced to Travis.

"Mhm. It's true," Kylie said. "We always knew each other, like we were hanging around each other. I mean, we just had mutual friends, that's what it was, but we never really had a conversation because I thought that he didn't like me."

Travis agreed, adding that they "never had a conversation for sure."

I'm just going to be honest and say that I find this all so amazing. Kylie freaking Jenner goes through the same thing that every girl goes through when they have a crush on someone, basically pretending like the other person doesn't exist because you're afraid your crush isn't into you.

Then Kylie tells us that she now understands that it wasn't that Travis wasn't into her, it's literally just how he acts all the time.

After talking about how she was afraid he simply didn't like her, Kylie said, "but now I know it's just your stand-offish personality," and LOL, this whole interview keeps getting better and better, you guys.

"Nah, but we actually went to Lego Land one time," Travis adds, but Kylie cuts him off, saying, "I don't think we spoke." Travis agrees, adding, "Yeah, we didn't. It's crazy."

So basically, I'm picturing Kylie Jenner and Travis Scott meeting up with mutual friends and hanging out together frequently, yet literally not uttering a single word to each other during each gathering.

I highly suggest you watch the whole thing (because seeing Kylie and Travis interact is actually mesmerizing), but if you want to listen in on how these two lovebirds met, fast forward until the eight-minute mark:

So I want to take this opportunity to apologize to Kylie and Travis for ever doubting their relationship. Now that I've seen the two interact in such a sweet and loving way, I'm 100% on board with everything these two are about. Stormi is beyond lucky to have two parents who love each other, even if they started off their relationship barely uttering a word to one another.

Keep up the good work, you two!