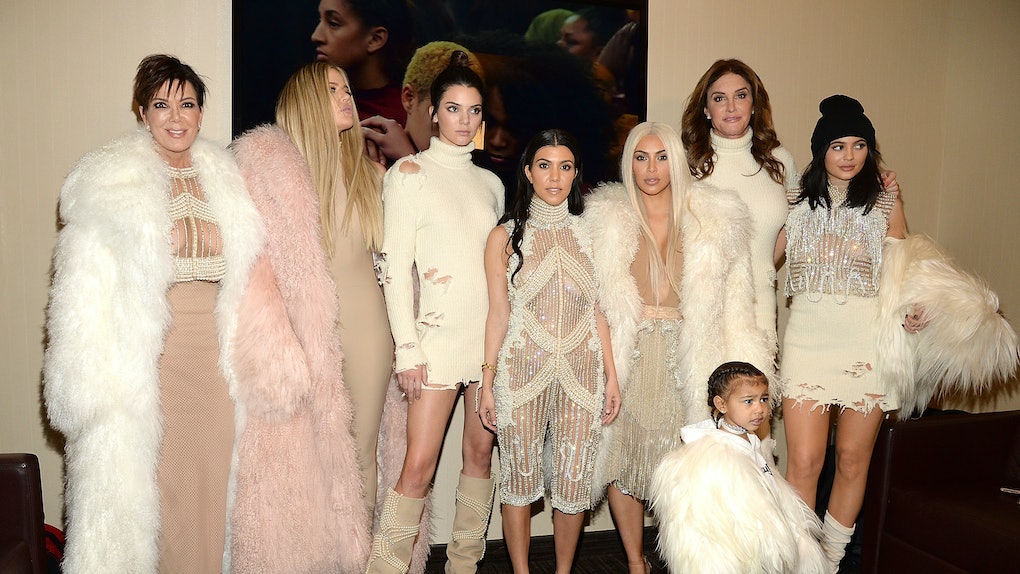 Here's The Kardashian-Jenner You're Most Like, Based On Your Love Life

Who are you? What is the meaning of life? There are plenty of important philosophical questions out there, but the most important has simply got to be: Which Kardashian-Jenner are you most like? Now, there are plenty of ways to determine which KarJenner sister you're most like. Are you more interested in makeup like Kylie Jenner or law like Kim Kardashian? Are you a blunt AF Aries like Kourtney Kardshian or a sensitive-and-sweet Cancer like Khloé Kardashian? Is your dream job title "momager" à la Kris Jenner?

But the most fun way to determine who you're most like, in my opinion, is based on your love life. These sisters have fallen in love, gotten married, gotten divorced, and spoken honestly about their sex lives — all in front the cameras. While they've each had their share of high-profile romances (even famously private Kendall Jenner), they've approached their love lives with totally distinct attitudes. While you might not ever have to negotiate over your Calabasas mansion in your divorce settlement, you probably do relate to at least one of these women when it comes to dating and relationships.

Ready to discover which member of the Kardashian-Jenner family simply gets you? Keep reading.

You're a hopeless romantic.

Love falling in love? Then you're definitely the most like Kim. Not only has Kim been married more times than any other member of the Kardashian-Jenner squad (three), she's been very open about her unwavering faith in love. Like, as in, she literally told People back in 2011: "I believe in love, always.”

As a diehard romantic, she obvi believes in soulmates, but she doesn't believe there's only one true love out there for each person. "I think you have different soulmates throughout your life, that your soul needs different things at different times," she once told Cosmopolitan UK. "I do believe in love. I will always believe in love, but my idea has changed from what I’ve always thought."

Don't need a man to make your life complete? Then you're probs most like Kourtney.

Yes, she's in a relationship with Travis Barker now. But, throughout the final season of Keeping Up With The Kardashians, Kourtney maintains that she is more than fine flying solo. Like, for example, when Khloé asked if she wants to be dating anyone and Kourt literally said, "I don't. I really don't."

You're the Samantha of your friend group.

You, my friend, are none other than Kris Jenner. Please look no further than this video of Kris raving about her sex life for all the proof you need on this matter:

You're in an on-again, off-again relationship.

Khloé and Tristan Thompson have quickly become the Rachel Green and Ross Geller of the Kardashian-Jenner family, which makes you the Khloé.

Khloé knows what it's like to get back together with an ex after a messy split and she's even familiar with the judgment that can come along with that sort of reunion. During a recent episode of Keeping Up With The Kardashians, Khloé revealed the outside input is the only thing putting a damper on her relationship these days. "When all this outside noise is not around me, we are great," she revealed. "Tristan and I operate fine, we have fun together, it’s enjoyable, it’s easy."

So, next time people are giving you shade for getting back together with your ex again, try channeling your inner Khloé and follow your heart.

You settled down early.

OK, so maybe you didn't have a child with your partner, who just so happens to be a famous rapper, at 20 years old like Kylie did. But if you'd love nothing more than to be a mom, you're probs the Kylie of your friend group.

"I always knew I wanted to be a young mother," she told Interview Germany. "I remember people used to ask, 'Are you ready for this?' And I always knew I was ready but you don't know what that love and that feeling is like until after you have a child. She really comes before me so that is a lot to take in at a young age but I feel like I was definitely made for this and she has changed my life for the better."

You rarely kiss and tell.

Are you that friend who barely feels comfortable showing off new relationship unless you've been official for, like, three years? Then you're def the Kendall.

Kendall has alluded to her love life sporadically over the years. Like, who could forget this iconic tweet she posted when a hater accused her of being "passed around" by NBA players?

And, in February 2021, she entered her first-ever Instagram-official relationship with Devin Booker. But for the most part, Kendall likes to keep quiet regarding her love life. “I’m very young and right now I feel like relationships aren’t always super-certain and I don’t want to bring too much attention to something if you don’t really know long term [what it’s going to be]," Jenner said in a May 2019 interview with GQ Australia when she was still linked to Ben Simmons. "A relationship is only meant to be between two people, and the second you make it the world’s business is when it starts messing with the two people mentally. Like once everyone is let in, you’re letting all these opinions into your relationships, and I don’t think that’s fair.”