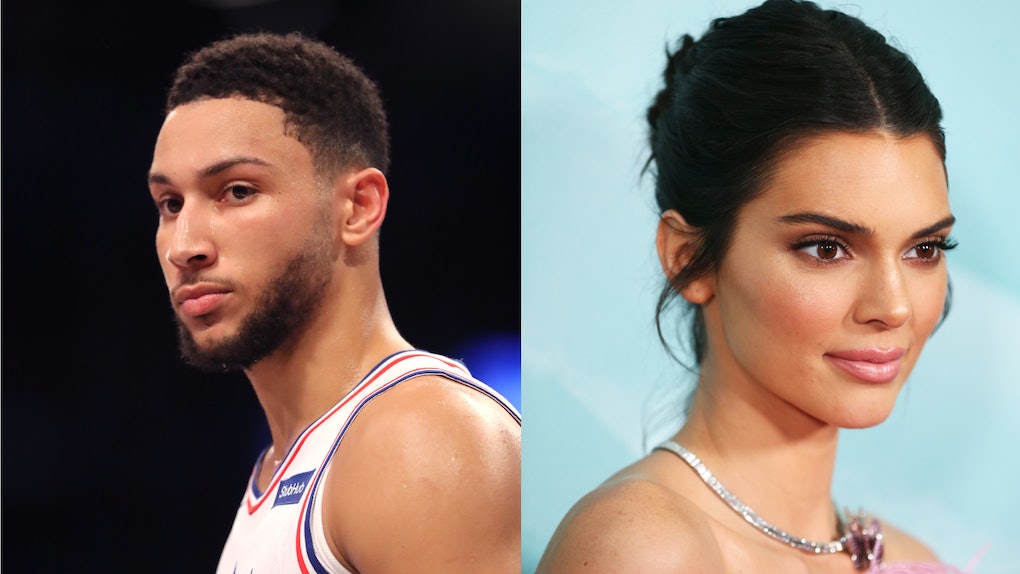 Kendall Jenner and Ben Simmons have been low-key dating for a while now, Kendall Jenner's quote about relationships in the June 2019 issue of Vogue hints Ben Simmons might not be The One. For those of you who might have missed it, Jenner first acknowledged that she's dating Simmons during an appearance on The Ellen DeGeneres Show in February 2019 in which she said that they'd been dating "for a bit now."

Vogue's Jessica Montague reported that while Jenner was getting all glammed up for her photoshoot, she was also streaming Simmon's game with the Philadelphia 76ers. Montague also noted that Jenner FaceTimed Simmons later in the day, "cheekily holding up the March/April issue of GQ Australia that had him on the cover." So, yeah, it definitely looks like there are some major flirty vibes between the two.

But you probably won't see them walking down the aisle anytime soon. Jenner made it clear that she's not exactly on a hunt for her soulmate right now. And she most definitely does not want everyone's opinion on a relationship that might not necessarily last long term.

“I’m very young and right now I feel like relationships aren’t always super-certain and I don’t want to bring too much attention to something if you don’t really know long term [what it’s going to be]," she told Montague. "A relationship is only meant to be between two people, and the second you make it the world’s business is when it starts messing with the two people mentally. Like once everyone is let in, you’re letting all these opinions into your relationships, and I don’t think that’s fair.”

Even if they do fall madly in love, Jenner probably won't be wearing her heart on her sleeve in public. Jenner told Australian Vogue that she learned from watching her sisters that putting your romantic life out in the public is a risk she's just simply not willing to take. “I got a glimpse of how my sisters dealt with [the attention] and it’s cool to learn from that," she explained. "For me, a lot of things are very special and very sacred, like my friends and relationships, and I personally think that bringing things into the public makes everything so much messier."

Honestly, who can blame her? Relationships are tough enough as they are. Having them scrutinized by the entire world just makes things about 500 times more complicated.

For the most part, Jenner is just trying to focus on the present. When it comes to the pressure of doing things romantically on a certain timeline, she made it clear that she refuses to succumb to that kind of pressure.

“I feel like once you do [that], it’s just completely ingenuine and you think that you have to be in a certain place when you don’t have to be," she explained. "Everyone has their own path and their own way of letting the cards fall. Your 20s are for messing up and figuring it out.”

When Montague joked about whether or not Jenner would be down for a Tiffany & Co. engagement ring (she's the star of their Spring 2019 campaign), Jenner wasn't opposed. But she's not looking for one anytime soon. “Maybe," she retorted. "Definitely not now, but maybe one day.”

Here's to hoping whoever she ends up with — whether it's Simmons or someone else — can afford a Tiffany & Co. rock.