Stop the press, people! We've got some pretty big news in the Kardashian world going on, because at long last, Kendall Jenner confirmed she's dating Ben Simmons — the 22-year-old point guard for the Philadelphia 76ers. Yes, people, it's finally happened! After months of speculation as to whether or not the Keeping Up with the Kardashians star was getting serious with the basketball player, we finally have our answer, and we have Ellen DeGeneres to thank for that.

Kardashian visited The Ellen Show on Friday, Feb. 8, and DeGeneres spared no expense in getting the question right out there. DeGeneres subtly threw a photo of Kardashian on the sidelines of a basketball game with Simmons in the forefront of the shot playing basketball. DeGeneres asked Jenner whether or not she liked basketball, to which the star replied, "I've been into basketball for a little while. I used to go to games with Khloé a lot, and I just got into it."

But naturally, things took a turn to some ~Hollywood gossip~ when DeGeneres jokingly looks at the picture and asks Jenner, "Who's that guy that's in the way?" referring to Simmons.

"I'm not so sure," Jenner responded slyly.

"I'm not either. I don't know anything about basketball," DeGeneres said, playing it super casual. She continued, saying, "Obviously, you're dating this guy who's on this [Philadelphia] 76ers— is that what it's called?... I don't know basketball. How long have you been dating him?"

That's right, you guys. Our homegirl Ellen asked that question for us. She's succeeded where everyone else has failed.

Jenner *could* have denied the dating rumors, or simply dismissed DeGeneres' question... but nope! She answered simply, "For a bit now," making sure that she kept the details close to her chest.

Then, things get fun.

DeGeneres asked Jenner if her mom, Kris Jenner, would approve of Simmons, Kendall starts to answer by saying, "I think so," but at the same moment she responds, a Kris Jenner doppelgänger pops out of the side table next to the pair and scares the ever-living crap out of Jenner. To aid you with a visual, it looked a little something like this:

After Jenner got her wits about her, she told DeGeneres that she was shaking, which honestly, I'd be more worried if she was totally fine. I'd also just like to imagine that the real Kris Jenner was hiding in the side table because I'd just really like to live in that kind of world.

She needs to do nothing of the sort, Kendall.

You can watch the whole exchange (and the hilarious prank) below: 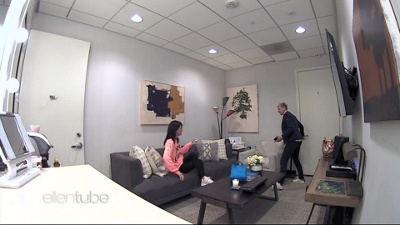 While Kendall Jenner and Ben Simmons have not spoken about their relationship publicly, a source told E! News back in November 2018 that the pair have been making things work despite their very busy lives.

"Kendall and Ben have been making more of an effort in their relationship recently, and have been seeing each other regularly for the last month now," a source told the site. "They both are very busy with their careers, but have always been in touch." The source also added that the pair "reconnected when Ben was in town recently and have been seeing each other since," and that "they try not to put stress or pressure on the relationship, but Kendall isn't actively seeing anyone else right now."