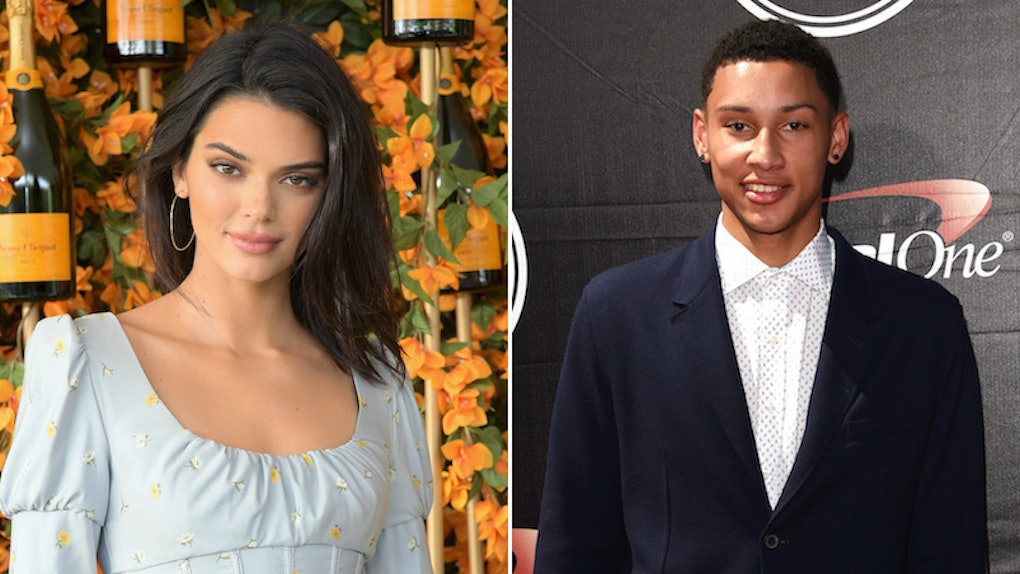 Kendall Jenner Watched Ben Simmons' Basketball Game With His Mom, So They're On That Level

There are certain signs that a relationship is going really, really well. A dead giveaway? Meeting the parents. An even bigger giveaway? Hanging out with the parents *without* your significant other there, meaning there's absolutely no buffer between you and your SO's mom or dad, and you're totally cool with it. And, while we've yet to get any confirmation on their relationship status, the fact that Kendall Jenner watched Ben Simmons' basketball game with his mom sure seems to me like these two are getting pretty damn serious.

On Monday, Jan. 21, the Keeping Up With The Kardashians star and supermodel sat courtside with Ben Simmons' mom, Julie Simmons, to watch the Philadelphia 76ers go head-to-head with the Houston Rockets at the Wells Fargo Center in Philadelphia, Pennsylvania. Yes, fam, that means Jenner took a trip out east to cheer for her (maybe) boyfriend. And apparently, the two women rooting for Simmons together must have been good luck, as his team defeated the Rockets, 121 to 93.

The thing that surprises me most is just how casual these two are next to each other. It feels as though perhaps these two have their own friendship going on, which I'd be totally here for. Check out the photo below to see what I'm saying:

Although, to be fair, this isn't the first time Kendall was spotted with Julie at one of Ben's games. In late November 2018, the pair was spotted laughing together and clearly having a lighthearted conversation with one another while the Philadelphia 76ers played against the Washington Wizards. I think it should be noted that the Simmons' team also won that game as well, by 25 points, and I feel as though I'm sensing a pattern here. What tricks do Kendall and Julie have up their sleeves?

Who knows, maybe it really is sorcery.

Rumors that Jenner and Simmons were dating began back in May 2018, but by August of that same year, it seemed as though the pair had "cooled off," and were no longer dating.

But more recently, we've seen the pair together again, and Jenner has been attending a handful of Simmons' basketball games, which might point to the fact that these two are back on. While we don't have concrete confirmation from Jenner or Simmons, there have been sources revealing that these two are dating again.

"Kendall and Ben have been making more of an effort in their relationship recently, and have been seeing each other regularly for the last month now," one source told E! News. "They both are very busy with their careers, but have always been in touch. Kendall really likes Ben and he has been keeping her attention," the source added. "They try not to put stress or pressure on the relationship, but Kendall isn't actively seeing anyone else right now."

Now if only Kendall would give us concrete confirmation, then we could all be happy. C'mon, Kendall, why can't you spill the beans to the entire universe about something deeply personal and private?

And pretty, pretty please, keep the mom content coming. There's nothing I love more than seeing a boyfriend's mom (or whatever title we'd like to call it here) hanging out with her son's girlfriend (or whatever we can call Kendall in this instance), possibly performing witchcraft. So relatable!