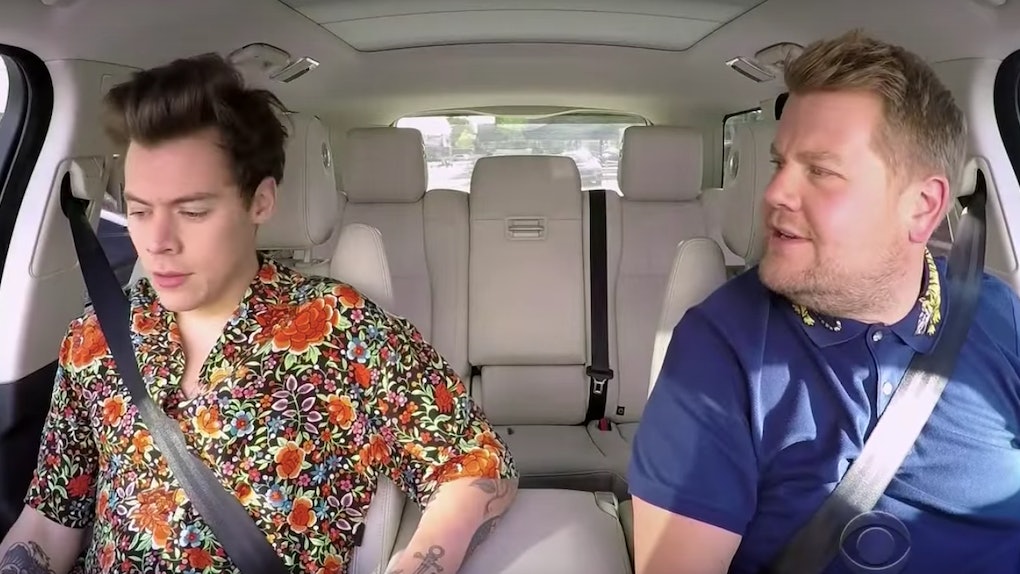 There are some pop culture moments that can only be described as one thing: iconic. What sorts of moments, you ask? Well, moments like Madonna and Britney Spears' VMAs kiss. Or that time Angelina Jolie kissed her brother after the Oscars. OK, I guess what I meant by "moments" was "iconic kisses," and two huge celebs just gave us another one to add to the list. Yep, that's right. Harry Styles and James Corden kissed on Carpool Karaoke, and people literally are freaking out about the iconic celebrity moment.

The two actually shared their first kiss back in 2013 when Harry Styles and the rest of One Direction visited James Corden on the set of his show A League of Their Own. As if that kiss wasn't enough of a treat for the world, the two decided to come back with another smooch on the holiday edition of Corden's hit segment of The Late Late Show, Carpool Karaoke. In the segment, the two are just cruising around in Corden's car, listening to some Christmas jams, when Corden offers Styles a very British "Happy Christmas, Harold." Then, the two share a super ~sensual~ look, and BOOM. Harry goes in for the smooch.

Check out their steamy kiss for yourself below.

As you can imagine, the internet went NUTS, and Twitter is ripe with reactions, ranging from people declaring it the greatest TV moment of all time to people saying they've never wanted to be James Corden more in their life.

People are calling it a Christmas miracle.

Some people are, like, SO jealous of James Corden.

James and Harry 5ever.

Here's to hoping it happens again in five years!

Extra? I think you meant ICONIC.

CLEARLY, THE SPARKS WERE FLYING, PEOPLE.

What a holiday blessing for everyone.

James Corden is the luckiest man in the world.

Yep, people are swooning for BOTH of them.

Watching them kiss is better than sex.

Some people still haven't had their first kiss, while Harry and James are out here kissing like nobody's business.

Ladies and gentlemen, I introduce to you: Jarry.

This all being said, while most people were dying over this moment, there were some less-than-great reactions to the segment from the LGBTQ+ community.

Some people saw it as mocking their sexuality for entertainment.

Others make the argument that their kiss is nothing to write home about in 2017.

I've got to say, I do see where the last user was coming from. Yes, Madonna and Britney's VMAs kiss was a big deal... but that was in 2003. The point is, it's now 2017, and people are kissing who they wanna kiss!

And that being said, I highly doubt that either Corden or Styles meant anything offensive by the kiss. At the end of the day, people love the two of them, and maybe it wasn't necessarily the KISS itself that was newsworthy, but instead, the fact that two celebrities we really love came together for a super happy and fun moment. Just as one Twitter user said, in a world where our daily news consists of nuclear war threats and harrowing sexual assault stories, something fun and lighthearted is a nice, happy breath of fresh air.

If you weren't able to catch the full Christmas Carpool Karaoke segment, watch it below:

More like this
Are Olivia Lux & Utica Dating After 'Drag Race'? Olivia Gave An Update
By Dylan Kickham
Michelle Obama's Easter 2021 Instagram With Barack Is A Cute Photo Booth Moment
By Daffany Chan
3 Zodiac Signs Most Compatible With Kourtney Kardashian & Travis Barker
By Caroline Colvin
Stay up to date