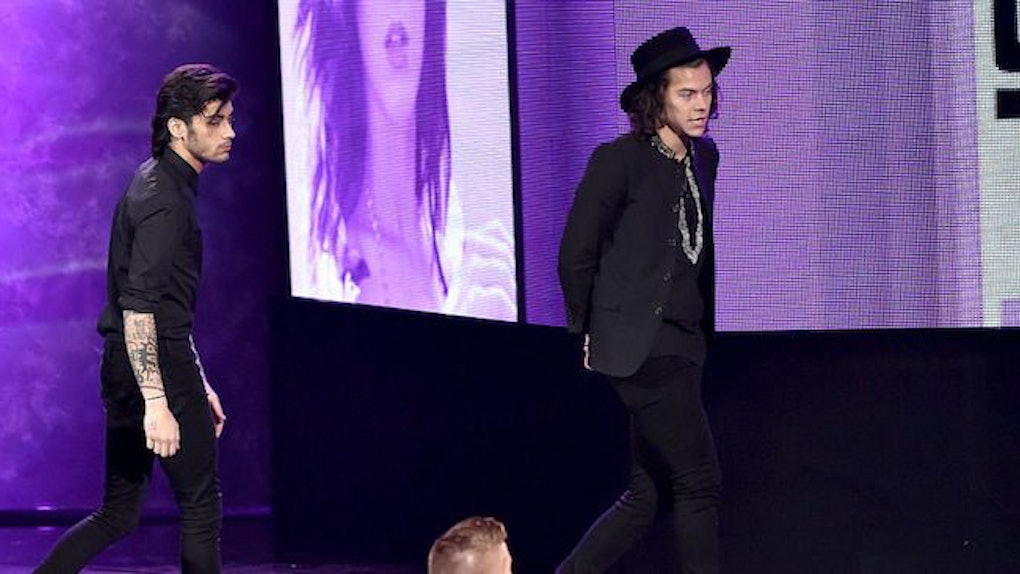 Zayn Malik & Harry Styles' Friendship Isn't What We Thought It Was

It's not that celebrities aren't allowed to have their own individual lives and complete three-dimensional personalities, it's just I would like for those things to be exactly how I imagine them in my mind. It's tough when you find out the relationships and history two celebrities share isn't exactly as you dreamed it was. Enter One Direction and their infamous decision to go different directions. Specifically, Zayn Malik and Harry Style's friendship isn't what we thought it was, and the truth is kind of a big buzz kill.

The public got behind the scenes details on the boys' friendship when Zayn Malik hosted US Weekly's Most Stylish New Yorkers Party on Tuesday, Sept. 12. During an interview with the magazine, he let loose some intimate details about his famous relationships, including where he stands with former 1D band-mates, and if they all stay in touch now.

Malik famously left the group first back in March of 2015. Despite fans outcries, we soon learned Malik would be the first domino to fall in a series of dominos that ultimately led to the group disbanding. 1D die-hards call the day he made his announcement "Z-Day" because a good boyband fan is nothing if not dramatic.

When asked if the group stays in touch, the answer is... well... not really.

We're in touch. Everything is on a civil level. It's not the way it used to be, obviously, because we were spending 24 hours a day in the band and now we're growing as individual men, but we still check in.

Call it a hunch, but if you have say things are "civil" usually that means something went wrong. Plus, can I just say that Malik was always the one with a moody chip on his shoulder? THERE. I SAID IT. COME AT ME, INTERNET.

Of course, Harry Styles was the undeniable baby-faced (but somehow mature, sexy, man-faced at the same time) stand out, and this year delivered us what we all truly wanted, "Sign Of The Times." Malik, however, seems to be in the anomaly of people whose whole world wasn't rocked when it came out.

Are you ready for the big reveal? When asked about his friendship with Styles, Malik said,

To be honest, I never really spoke to Harry even when I was in the band. So I didn't really expect that much of a relationship with him.

I know. I'll give you a minute.

Isn't that, like, the worst thing you've ever heard? It's like when I found out Free Willy was fictional and that kid didn't actually ride an orca whale to freedom. Not cool, Hollywood. People COUNT on sh*t like that!

Malik was also pressed about if he feels pressure to settle down and have a few kids, like fellow ex-bandmates Louis Tomlinson and Liam Payne.

Psht, people, please. What have we learned? HE DOESN'T CARE WHAT THEY DO.

He said in response,

I don't think things like that should be decided based on feeling pressure. When it's the right time and place, hopefully that will happen. Who knows when that will be.

Ok, well, that's mature, I guess. But still, Zayn. Don't you care about ANYONE besides your smokin' hot and super talented girlfriend, Gigi Hadid? Out of all of the questions, Malik seemed most confident discussing how to date in the spotlight:

We try not to think about it too much. There are a lot of people who are too busy in other people's lives. I just concentrate on my relationship and try to do right by my girlfriend and she does by me, and we hope for the best, as we all do!