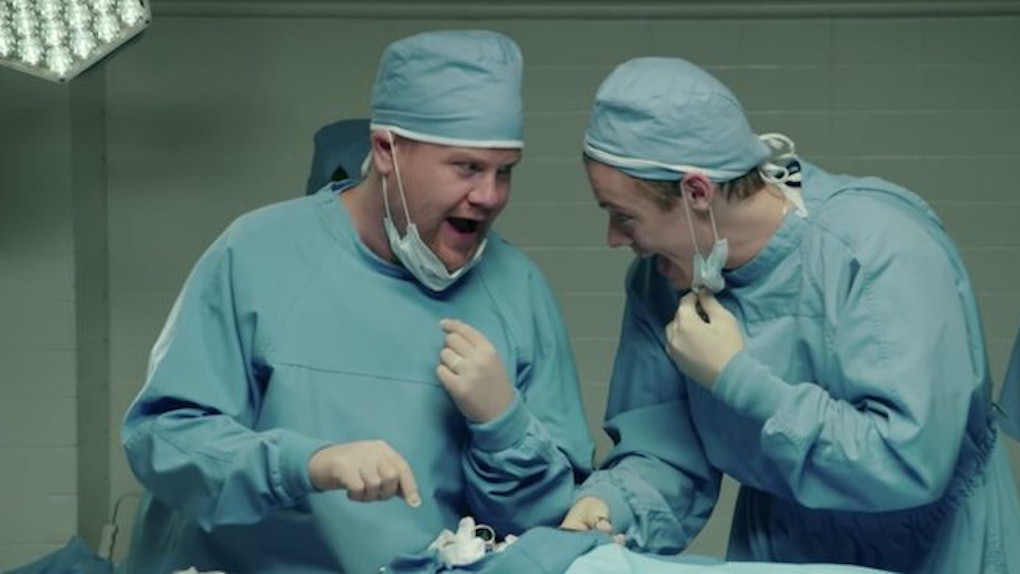 I'll go ahead and say it: James Corden is a sexy animal.

I've been riding the James Corden train since Into The Woods, and have only fallen more in love with him over the years as the Late Late Show host, creator of Carpool Karaoke, and most recently, as a singing sexy doctor.

Add a touch of Harry Styles to the mix and, seriously, forgetaboutittttttt.

Styles recently visited Corden on the couch of the Late Late Show, and accompanied him in a hilarious sketch where the talented duo keeps finding themselves in high-stake situations with the urge to belt out into song.

Would I have guessed the result would turn me on? No. Did it anyway, and now I must tell the whole world? Yes.

Out the gate, they channel some serious McDreamy and McSteamy vibes, singing over a risky surgery.

And what's a more appropriate song to sing to during surgery than Tom Jones' "It's Not Unusual?" As Harry and James dance the operating room away, of course, their patient flatlines. Woops.

James eloquently says, "That was my bad."

Next up, the pals appear as pallbearers. Obviously.

Listen, I'm not saying that it's appropriate to burst out in a Lou Bega hymn at a funeral, but I AM saying if James and Harry were to appear at a funeral I was attending, it would definitely take the room from sad to FAB.

Lastly, Harry and James must save the world, and themselves, from a bomb set to go off.

AND cue the singing.

Nothing gets me going faster than the threat of immediate death and a little "Wake Me Up Before You Go-Go" action.

Sure, the sketch ends with the world blowing up, but it was worth it to watch these two get down together.

Now if you'll excuse me, I need some privacy and a cold shower.