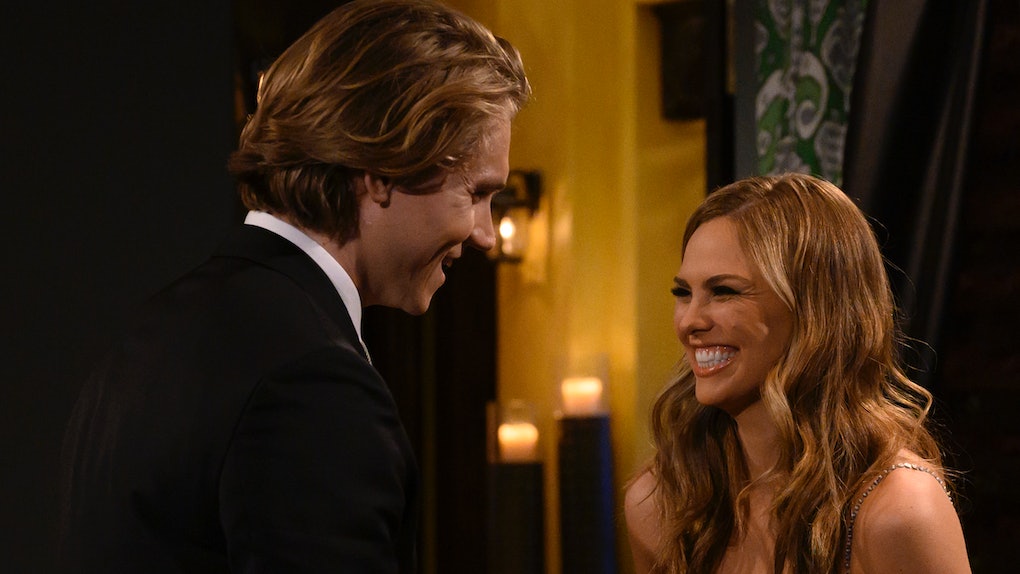 Hannah B.'s Quotes About John Paul Jones On 'Bachelor In Paradise' Will Make You Say "Same"

It feels like just yesterday when Bachelor Nation only knew John Paul Jones as a lover of chicken nuggets who was on The Bachelorette for laughs. Since then, fans have watched JPJ's happy-go-lucky approach on Bachelor in Paradise descend into often-unflattering jealousy as he fought for Tayshia Adams' attention. I'm still shook by this extreme shift in his personality, and Hannah B.'s quotes about John Paul Jones on Bachelor in Paradise show she feels the same.

On Season 15 of The Bachelorette, John Paul Jones' televised interactions with Hannah Brown were sparse, but viewers loved his enthusiasm for the group dates and his choice to scarf down chicken nuggets while other contestants fought. Though JPJ didn't include nuggets in his Bachelor in Paradise theme song intro as many fans expected, he still initially came across as pure and wholesome as his Bachelorette edit implied. Then, when he fell for former Bachelor contestant Tayshia, John Paul Jones then began embracing his sweet side to woo her.

However, his love affair grew complicated when Tayshia encouraged him to pursue other women while she connected with Derek Peth. Convinced Derek was only on Paradise to "take advantage of women" and generate content for his Bachelor-related podcast, John Paul Jones lashed out at him, claiming Derek didn't have good intentions with Tayshia or his Paradise fame. Hurt because she learned of JPJ's feelings for Tayshia from Derek, Haley Ferguson later confronted John Paul Jones about disrespecting her after their date together, and his slightly cold reaction didn't sit well with fans.

It's hard to reconcile JPJ's new Paradise persona with the character they met on The Bachelorette, and Hannah B. is just as shocked about the change as Bachelor Nation is. Although she never singled out John Paul Jones as one of her favorite Bachelorette men, she certainly appreciated him as the comic relief. Speaking to Extra, she said, "It shook me! I’m shook! Because John Paul Jones, to me, is just like my relief from the drama and now to see that JPJ is having drama-filled everywhere … I don’t know, I saw a whole new side of JPJ! I still love the guy. He’s awesome. He’s the best!"

Some of the Paradise contestants might disagree with Hannah's positive outlook on John Paul Jones. As seen in Week 5 of the ongoing sixth season, JPJ's resistance to talking civilly with Derek increased the tension between the men, and Tayshia seemingly sided with John Paul Jones when she later broke up with Derek. The Paradise veteran took this as his cue to leave the beach, giving John Paul Jones a bit of an ugly victory in the pursuit of Tayshia's heart.

The good news is, JPJ has recognized at least some of his actions in Mexico weren't the best. Following the airing of his feud with Derek at the wedding of Paradise alums Chris Randone and Krystal Nielson, he issued an apology on Instagram, writing, "I do deeply regret that my behavior was disruptive and upsetting to the celebration of Chris and Krystal’s wedding reception ... Despite the fatigue and anxiety I felt at the time, I should have used good judgment in my decisions and acted in a more mature and selfless way."

Although Derek called the statement "an attempt to save face," John Paul Jones' post garnered support from other franchise alums, including his fellow Paradise contestants Katie Morton and Chris Bukowski. Since Hannah B. isn't the only one who's willing to give him a second chance, maybe Bachelor Nation will wait for the rest of John Paul Jones' Paradise journey before fixating on his poor judgment.