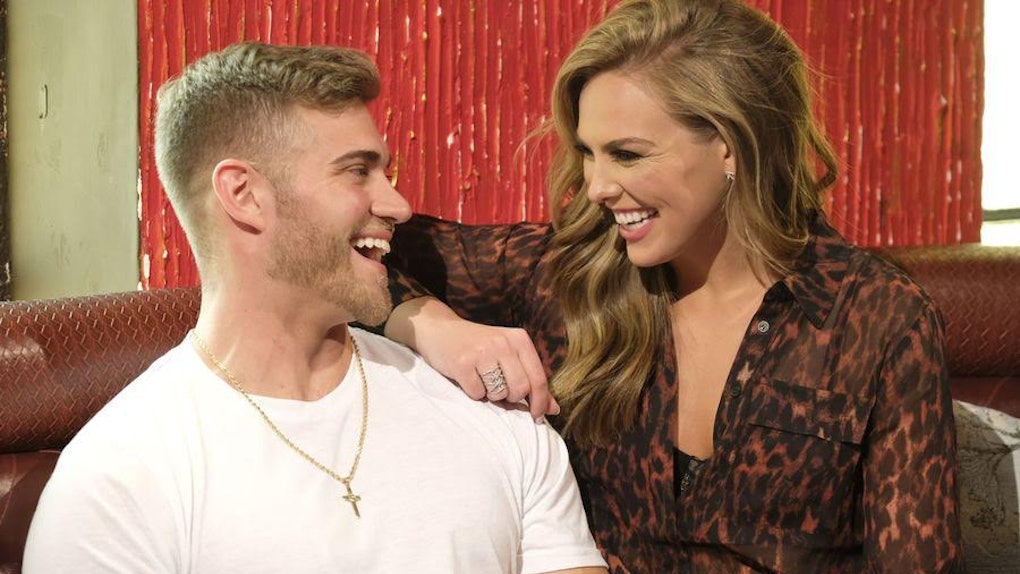 Hannah B. & Luke P.'s Body Language On 'The Bachelorette' Explains What She Sees In Him

It's safe to say that in almost every installment of the Bachelor franchise, there are contestants you root for and contestants you can't wait to see eliminated. On the current season of The Bachelorette, Luke P. is most definitely the latter, making most viewers question why he's even still around. Throughout Season 15, Hannah B. and Luke P.'s body language on The Bachelorette has been more or less consistent, according to two body language experts, and their physical dynamic gives off some major clues as to why he hasn't been eliminated yet.

But before we jump into what ~vibes~ their bodies have given off throughout the season, it's important to highlight their history a little. Luke P. got the first impression rose during The Bachelorette season premiere on May 13. Since then, he's basically made a jerk of himself in every episode, whether it's by making everything about himself, fighting with the other contestants, or telling Hannah exactly what he thinks she wants to hear (which, BTW, she called him out on). Fans of the show are even calling him the Luke-ness Monster. I'm telling you, it's not pretty, but Hannah has (inexplicably) kept him around.

In a conversation with E! News, Chris Harrison opened up about Hannah's drama with Luke and how it's taken up most of the spotlight on Season 15. "She can't quit this guy," he said. "She just can't get out of her own way. There was a bond between them that she doesn't have with the other guys, and part of it is their religion, part of it is their faith. Part of it is this chemistry, this physical bond they have with each other where she just can't quit this guy, no matter how hard everybody yells and screams and begs her to stop, she just can't." That chemistry is easy to pick up on in their body language. Here's what else experts see in their physical dynamic.

1. There's An Obvious Connection Between Them

One of the first things Bachelor Nation fans noticed about Hannah and Luke was their instant physical attraction to each other. "There's obviously a lot of sexual attraction, he's turning into her, he's more in control, he's leaning into her," body language expert Susan Constantine tells Elite Daily. "They're mirroring each other's body language, their hands are forward, touching each other, but she's a much more emotional, touchy-feely kind of girl. She's more connected through touch, he's not."

But Traci Brown, body language expert and author of Persuasion Point: Body Language and Speech for Influence, disagrees. "She's more into him here than he is into her," she tells Elite Daily. "See how she's leaning in and has her hands on him? He's not reaching for her at all."

2. He's Totally Smitten With Her, But Has A More Reserved Personality Than She Does

Brown says that in this picture, Hannah, again, looks more into Luke than he is into her. "She's leaning in with her full arm on his shoulder, and she's getting nothing back from him," she says.

While Constantine echoes that sentiment, she also adds that you can see Hannah's playful side here, and though he may not be leaning into her, Luke is very much taken by her. "He's not leaning into her, but he is looking at her facial expression, and his expression is one of pure joy and enlightenment and excitement, but he's more reserved," Constantine says.

3. I Guess Opposites Do Attract

Although their opposite personalities may be exciting for them now, Constantine says it could cause problems down the line. "Over a long period of time, that may become an issue, or he may love it that she brings out that playful side of him because he tends to be a little more serious," she explains. "Or it could be a distractor because she's more playful and silly, he may say, 'Hey listen, you need to focus.'"

4. They're In That Sweet, Puppy Love Phase

In the three pictures above, Brown notes that Hannah (again) looks more interested in Luke than he is in her, but in this one, she points out that he is pulling her in close. Though, she also thinks Luke is more intrigued by the weight in his hand than he is in Hannah in that moment.

"[Her expression is] very playful, giddy, almost in that first, puppy love excitement you see in her, and he at the same time," Constantine adds. "He's showing his muscles off, showing how focused, and how buff he is... where she's kind of drifting off, looking out, being silly."

So, while most viewers may not be Luke P.'s biggest fan, his body language with Hannah B. shows they do have a strong connection that could result in a happy pairing. "I think it's a cute relationship," Constantine says. "It's adorable, I think they're going to have a lot of fun together."

Who knows? Maybe Luke P. can somehow redeem himself before The Bachelorette Season 15 finale on July 22. I guess only time will tell. (But I'm still rooting for Mike. Don't @ me.)