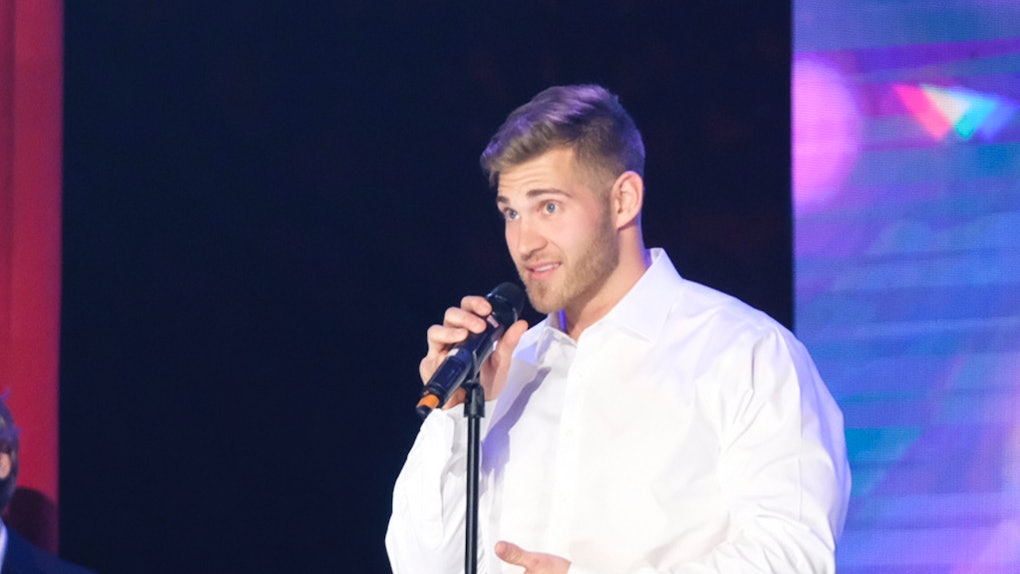 Despite the previous episode of The Bachelorette ending on a cliffhanger, Luke P. made it through a controversial rose ceremony and joined the other men on a journey to Scotland in Episode 5. He just barely snagged a rose last time, but Bachelor Nation was shook when Luke scored a private date with Hannah Brown in Scotland. However, Hannah and Luke P.'s one-on-one date on The Bachelorette went downhill when he just couldn't open up to Hannah about himself.

ICYMI, Luke P. clashed with Nick Viall doppelganger Luke S. during the group's time in Newport. Luke S. claimed that the other man body-slammed him during a rugby game, but as cameras didn't capture the exact moment and Hannah seemed to miss it as well, the rest of the episode quickly became a battle of the Lukes. Luke P. insisted that he grew hostile because he feared Luke S. was about to attack him, while Luke S. stuck to the story that Luke P. had a glazed look in his eyes when he slammed into him. Throw in the fact that all of the men already disliked Luke P. and the feud wasn't exactly in his favor.

Still, as she had more of a relationship with him, Hannah ultimately sided with Luke P., and Luke S. sent himself home on his own terms. In Scotland, Luke P. then told cameras, "I'm definitely misunderstood by the guys, and if what they say about me starts to creep into what Hannah thinks about me, that's a line and that's when I'm gonna step in and I'm not gonna allow that to happen."

As the other men pledged to watch themselves as long as Luke P. was there, Hannah used one of her individual dates in Scotland to have a serious conversation with Luke and try to understand the men's distrust of him.

Knowing all about Luke's red flags, Hannah was nervous before the date, but Luke insisted that the rugby drama was never his intention. Hannah admitted she was more concerned about Luke's other problematic behavior, but Luke claimed the men twisted his words. He said everyone he met at school loved him, essentially dancing around Hannah's need for deeper answers. She confided to cameras that she still didn't know where Luke's heart was at and that she needed more from him.

The show even included footage of Hannah talking to producers about her fears that Luke just didn't display emotions. She returned to him, but Luke stuck to his go-to answer of wanting to make things right for her and give her "clarity." Hannah wasn't having it, telling him that he focused on saying things he thought she wanted to hear rather than being real. She wants you to be real and bold, Luke!

"I want to be able to send him home just like any other guy that's pissing me off," she told cameras. "What if I let go of Luke and he's who I'm supposed to be with? ... I can't keep making excuses for him when I'm not doing that for anyone else."

At the night portion of the date, Hannah pointed out that while Luke didn't have concerns about their relationship, she did. She wanted a man who could own up to his flaws, convincing Luke to admit he was trying too hard to be perfect. He said he struggled with being himself because of the men's supposed lies, prompting Hannah to talk about her own difficulties while on The Bachelor.

"I make my own decisions about people and I felt strongly that what people were saying was not who you are," she told him. "When I talked to you about it, I'm not feeling validated in trusting myself in that."

Desperate to make a real connection, Hannah's pleas for Luke to share more about himself basically produced a roundabout, fruitless conversation. She questioned whether to give him a rose, telling, "After today, I don't feel good and don't know how I feel about you. All I want is to see Luke be Luke, but it's just not what I hoped for ... honestly, today was the worst a day has gone for me."

"Sometimes I look at you and I don't think there are any roads that lead to what I want," she continued. "I can't give you this rose."

Unfortunately, the episode ended with that teary statement, meaning that fans will have to wait and see how this intense date and Hannah's need for more ends. Next week's preview hinted that Luke P. lives on, so who knows what comes next?