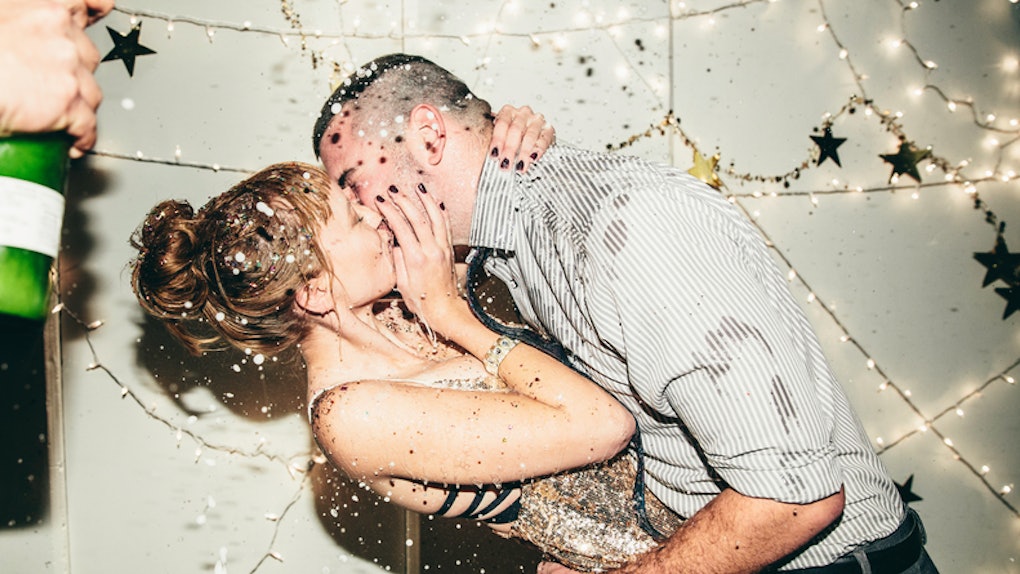 Whether or not you write out resolutions, I think it's safe to say that everyone enters the New Year with a certain set of hopes and expectations. And, regardless of your relationship status, I'm guessing about half of those have to do with your love life. Personally, my resolution is to pull a Meghan Markle and somehow marry into the British royal family (shoot for the stars), but I was curious to see what my dating app matches were aiming to accomplish in their love lives. So I asked point blank, and guys told me their dating resolutions for 2018. And let me tell ya, they totally warmed my cold, cynical heart.

I'd unfairly assumed that these guys would say things like "get laid" or "avoid crazy ex-girlfriends." But in an unexpected and very uplifting twist, it turns out a lot of these fellows are looking to find something serious and special in the new year.

Unfortunately, most of my swiping was done while I was home in Boston for the holidays (and not in London, where I'm currently studying), meaning I live on a different continent than most of these men. That, and uh, I'm pretty sure none of them have royal blood. But just because they're not right for me doesn't mean they're wrong for you, ladies! Here are just a handful of the gentlemen I spoke to who are looking for love in the New Year. (Oh, and if you're also hoping for a relationship in 2018, Massachusetts is apparently the place to be, ya'll!)

Jack was the first person I asked, and I absolutely adored his answer. While he wasn't necessarily looking for something serious, he was after one person to have adventures with in the new year. And honestly, who wouldn't love to find someone to go on a bunch of crazy dates with?

What's this?! Another guy who's looking to "be happy" with just one, caring person? I think my heart might explode.

Women of the internet, meet Shane. He's an expert in candy flavors and, as I learned later on in our convo, a Disney movie connoisseur. Like Sohail and Jack, he's looking for one lady to call his own in 2018 — someone he can travel with and take home to Mom and Dad. Please form an orderly queue.

All right, now back to the fellows who are looking for something longer term. Jack (another Jack!) is also hoping to find the right girl this year. But like, no rush, guys. Good things come to those who wait.

I know, I was confused at first, too. But give it a minute...

Is it just me, or is this opener genius? Like wow. It was almost enough to distract me from asking Mohsin what his dating resolution was for the New Year.

Glad I remembered, though, because Mohsin's resolution was another one of my favorites. I think both men and women get so caught up in playing hard-to-get that sometimes (OK, a lot of the time), we wait way too long to ask a person out on a second date. But forget the games and two-day rules — if you like someone, just ask them out again! I'm going to try to do the same this year.

OK, so Vikas isn't looking for a girlfriend, per se. But he is looking for someone to invite to his company's holiday party next year, which is apparently epic. I know this because Vikas later described it to me in pretty intricate detail (and then unmatched me because, well, I live in London and probably can't make it to said party next December).

So, if you're also very into office parties and the potential to win the "best material thing" (apparently a cardboard version of the Iron Throne), be sure to hit Vikas up.

Kevin was one of the gents my mom had swiped right on when she took over my Tinder, and after reviewing his bio, I noticed that he'd added a line about recently getting out of a serious relationship (which I'm 99.99% sure connects to this resolution). If you're great at mending broken hearts and have no imminent plans to move far away, Kevin's the guy for you.

All right, girls. Cedric is wasting no time. He's a future doctor and he's looking to lock down a girlfriend before August hits. Are you in or are you in?

2017 may have seen the end of Anna Faris and Chris Pratt, but I've got a feeling love will be in the air in 2018. If you're hoping to get out of the so-called swiping hustle, well, Happy New Year!