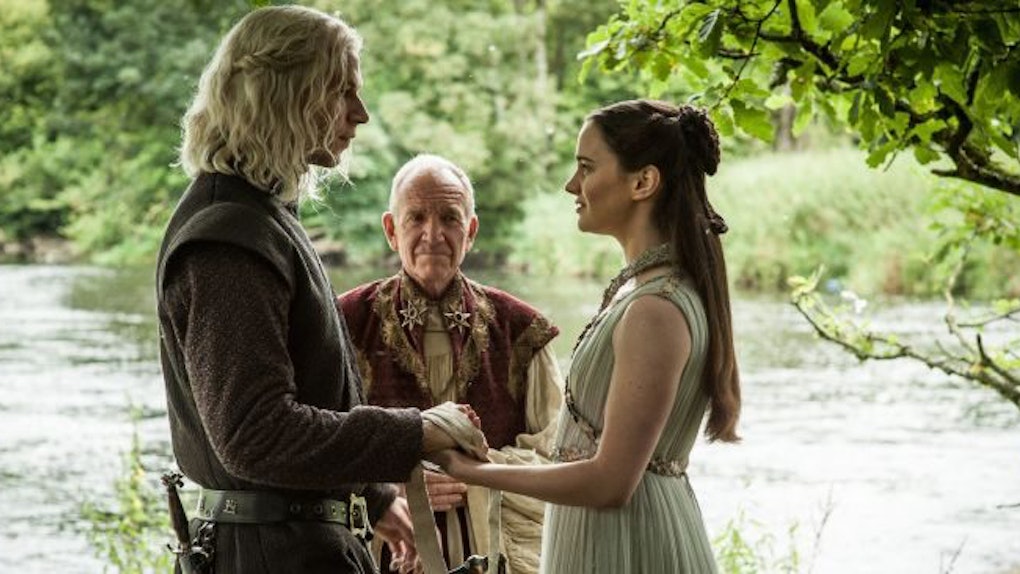 Who Will Rule The Iron Throne? Here's Why Jon Snow's Parentage Is Bad News For Dany

Game of Thrones Season 8 is still light years away, with filming more than a month from starting. But the revelations of the Season 7 finale are still hitting us from all sides. With Bran Stark on the warpath to tell Jon Snow the truth about his heritage and who he really is, things are going to come to a head early in the final season. But when all is said and done, who will rule the Iron Throne? The bad news is it doesn't look like it will be Dany -- not without a fight against the man she just fell in love with.

Initially, this is going to come as a shock to everyone. Jon obviously will be hardest hit, his entire identity will be turned upside down. This will also be a shock to Sansa and Arya, who have thought of him as their half brother. But the person it will be the biggest shock to, outside of Jon, is Daenerys. Her entire life is based on being the last Targaryen, and since Viserys died, the only living heir to the Iron Throne. All of that is about to be thrown into chaos. But worse, unlike Dany, Jon is going to have backers in Westeros.

You can argue that Dany has nothing to worry about, Jon's already pledged to Dany, he'll not be so pigheaded as to demand the throne for himself. That's probably true. But that doesn't mean that everyone else around Jon isn't going to be insisting he is the rightful heir and will back him at every turn against Dany in a fight for a throne he doesn't want.

Let's start with those in Winterfell when Jon and Dany arrive. With Jon as claimant to the Iron Throne, that leaves Sansa as Lady in Winterfell to represent as Warden of the North. Who do you think she'd choose, some silver haired interloper, or the man she's called her half brother all her life?

Then there's Sam. When Jon and Dany arrive, they'll bring news he hasn't heard yet: his father and brother are dead. Suddenly Sam is the head of House Tarly -- and with the entire Tyrell line dead, House Tarly are now Wardens of The Reach. Who is Sam going to pick? The answer should be obvious, the man who he already chose to ride to, instead of the Night's Watch he's still supposed to be a member of.

The North and The Reach represent only two of Westeros' kingdoms, but they're also the largest two, making up nearly 70 percent of the continent below the Wall. With the Freys out of the way in the Riverlands, House Tully will resume their rightful place as Wardens. Over in the Eyrie, with Littlefinger removed, Robin is the nominal head of House Arryn. Both will easily be swayed to follow Sansa's lead and join Jon, who has Stark blood in him.

That leaves The Stormlands (Gendry, once someone makes him a naturalized son of House Baratheon), The Iron Islands (Greyjoy, probably lead by Theon), The Westerlands (Jaime Lannister), The Crownlands (Cersei Lannister), and Dorne, if someone ever remembers to care about it. Gendry and Theon are more loyal to Jon than Daenerys, and Jaime is going to follow whoever gets the most votes.

Which right now is Jon, with a potential six kingdoms ready to pledge to him over Dany in a heartbeat. Dany has.... no one.

This only gets worse for her. Consider her allies in the planning department. While Jorah will stay with her until the end, and probably Tyrion as well at this point, Varys will probably swap sides in a hot second. Chances are he knew perfectly well about this annulment and remarriage (Crown Princes don't get remarried and completely disregard their first wife and living heirs, and the Masters of Spies doesn't know about it.)

Varys might have even wondered a time or two about that bastard Ned Stark brought back from the war, and if it could be the baby that Rhaegar's new wife was pregnant with. I would not be surprised in the slightest that it was people like Varys knowing enough that made it so Ned kept Jon's identity on such a deep lockdown in hopes they would lose interest and shrug it off after a while, especially once Jon had no Valyrian hallmarks in hair or eyes.

Jon Snow is probably going to insist he doesn't want this. But let's be real, Dany's temper is going to flair, especially once she takes one look at that scenario. She's going to break up with him on the spot, and maybe even fly off on Drogon. She's no Lady Mary from Downton Abbey, perfectly happy to marry the inconvenient heir to keep her home estate in the family. She came to be The Queen, as Margaery once said, not the Wife of The King.

After all, do people really remember the names of Aegon the Conqueror's wives? No, they remember Aegon. For Dany, that would be an untenable outcome.

The only way that Jon is going to be able to make sure Dany rules and stays that way is to take himself out of the game so that no one could use him or his name to prop up a challenge to her. Like Maester Aemon once did for his brother Aegon. He'll need to Take the Black once more.

Would he do it? Sacrifice himself to a life once again guarding the Wall, never be with Dany, so she can rule Westeros instead? Now that's a bittersweet ending. We'll find out in Season 8. Until then, Dany should be very worried indeed.