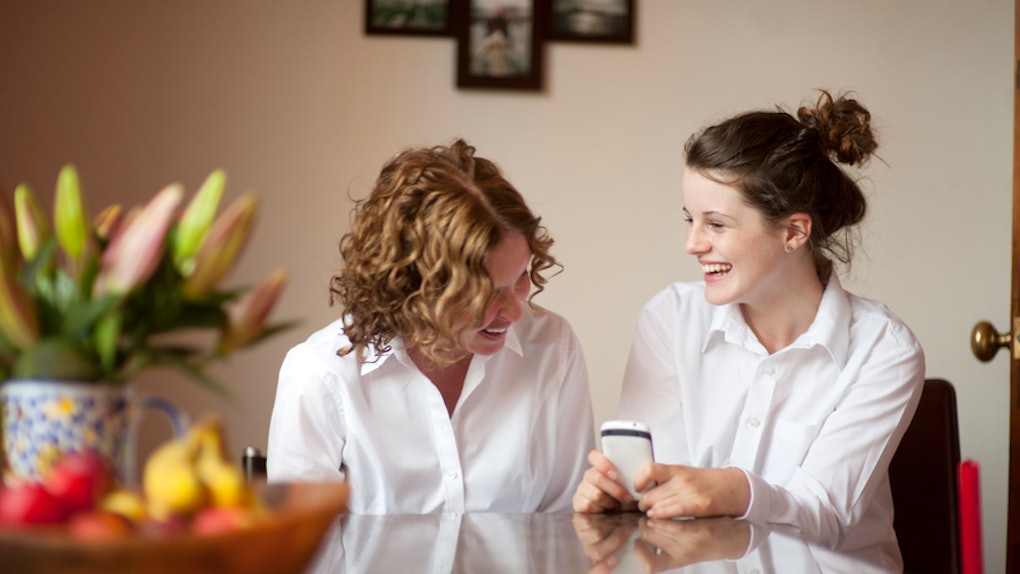 My mom and I have always been exceptionally close. In high school, I'd tell her every detail of my AIM convos with crushes, she was the first call I made anytime I met a cute stranger while studying abroad in college, and she's always up-to-date on the fellows I'm chatting with on dating apps today. But since I've become a dating writer, she's been increasingly curious about how the world of swiping works — which is why I gave my mom control of my Tinder account while I was home for the holidays.

I should note that my mom's been out of the dating game for a hot minute, and — while she's single these days, and will happily sing along to "Single Ladies" — she's not all that interested in hopping back in. She was also barely older than I am now when she married my dad, so dating apps are a pretty foreign concept to her. And my mom's quick to describe herself as "hip," "happening," and "up-to-date on T-Swift," I was still a little nervous about handing her the reins of my own dating profile. Would she be scandalized by the ab pics and suggestive bios? What if she found a wealthy, young financier and tried to sell me off (unlikely, but still)?

Fortunately, she was neither scandalized nor willing to sell me off. But she was judgmental AF, and I was all about it.

After swiping her way through 20 gentlemen in the greater Boston area, here's what my mom had to say...

"Daniel is an Identification Technician, that sounds creepy. I imagine him studying your retina or something. I'm going to swipe left."

"This guy has 595 Instagram photos. I hope they're not all of himself — he looks like he takes a lot of selfies. Swipe left."

(For clarification, "mumble mouth" apparently means that it looks like he swallowed his own lips? IDK.)

My mom quickly announced that Michael looked like Freddie Mercury, which I was pretty excited about. But when I asked if she thought that meant we could do a duet of "Bohemian Rhapsody" together, she said, "Probably, but I've already moved on from Michael."

Apparently, she didn't love his Freddie Mercury aesthetic as much as I did, and she was wasting no time.

"It looks like AJ is trying to grow a mustache, and he has terrible glasses. Like a dirty hipster. He's not your cup of tea."

This one made me laugh, because "dirty hipster" is exactly what I would describe as my cup of tea. I think my mom sees me with a cleaner-cut fellow, though — you know, the kind you might spot in a J. Crew catalog? Glad she was here to save me from myself.

"Let's see Eric... Smiley smirk, that looks suspicious. He can hold wine, that's good. Here he is with a bunch of girls, don't love that. Oh! But apparently dogs love him."

After deliberating whether the dogs made up for Eric's questionable smirk (no, no they did not), my mom dubbed him a "Leftie," her new term for any fellow who didn't make the cut for a Right Swipe.

"All right, Steve looks cute. Here he is on top of a serious mountain, so you know he's adventurous, good. But wait, here he is with a bunch of girls in bikinis!" She turned to me, looking genuinely perplexed. "Why do guys do this?! Why do they think girls want to see them with a bunch of other scantily clad women? It doesn't make sense!"

Now, this is something I've wondered about myself, but it's also never kept me from swiping right. My mom felt differently. As she explained, "I don't know what this guy's trying to prove, but I don't like it." Left Swipe.

Initially, my mom was intimidated by Kevin's beard and muscly pics. But his bio said, "Friendlier than I look," which seemed to reassure her. She went ahead and swiped right, and it was a match! Her very first! What a time to be alive.

Kevin didn't send a message, though, and my mom didn't love his lack of initiative. "This is the opposite of friendly!" she said.

"He's riding a giant grasshopper, so he must be whimsical," (TBH, I never saw Matt's profile, so I have no idea what this grasshopper-riding business is about?), "but he's also got mad abs. Like, more than a six pack. This is confusing. Is he playful? Is he someone I don't want to mess with in a dark alley? I don't know."

She was only more confused after seeing that Matt's profession said "International Sports Scientist," and decided we didn't have time to figure all of that out. Left Swipe.

"He spells his name with two Ls. I don't need to see any more." Left Swipe.

Abe had no age listed, and looked completely different in each of his photos. This had to be some Twilight nonsense.

"How old are you, Abe?! Are you a vampire? Are these pictures of you from every decade? Leftie."

Ruan looked like a "fun guy," but nearly all of his pictures were at Bruins' or Pats' games. While I'm not completely inept when it comes to sports, my ideal Sunday involves more brunch cocktails and less talk of Tom Brady. She swiped left.

"Oh, interesting. Brian's a 'Counter Associate.' Do you think that means he works at Starbucks? I do. Leftie."

OK, confession: I don't really know how to ride a bike, and may or may not have described bicycles as "the Devil's play things" on more than one occasion. That said, I'd never considered a love of bike-riding to be a deal-breaker when it came to relationships. But my mom did.

Mark's love for "two-wheeled vehicles" made him an instant Leftie in her book, because "he'd probably insist on teaching you how to ride a bike, and you would hate that." She wasn't wrong.

I was sure Ryan would be a Right Swipe. Then my mom decided that his apparent dog obsession meant he likely wouldn't be able to give Puff, my own dog (and the King of My Heart), the proper amount of attention. Left Swipe.

Mason's first and only picture showed him holding a plate of breakfast food, which — given my Stranger Things-level appreciation for waffles — was definitely a good sign. After reading his bio, however (which said "Great personality once you get to hate me. Emo since '08."), she'd had enough.

"'Once you get to hate me?' Stupid. 'Emo?' Stupid. We don't even know if he made that breakfast, anyway." Left Swipe.

Connor only had one picture, and no bio at all, which I'd usually be wary of. But my mom felt he had a "friendly smile" and "honest eyes," so she rolled the dice and swiped right. It was a match!

But again, no message from Connor.

"What, are these boys too busy to talk to us?"

Obviously, they had no idea what a catch we were. And by we, I mean the Mother-Daughter duo to which they'd unknowingly Right-Swiped.

Was my mom into Marco?

"All right, he's Italian, visiting from Rome, so he's obviously just looking for a fling. I'm going to swipe right, but only if you promise not to have a steamy affair with Marco while you're here, OK?"

We had a deal. But like, then we matched (and Marco did have nice eyes), so TBD...

Another fun fact about me: I only have one and a half lungs, so smoking (while I don't especially mind it) is a huge no in my mom's book. Luke's first picture showed him "smoking... something..." Immediate Left Swipe.

Truth be told, I'm usually looking for little more than a couple of cute pictures and (hopefully) a clever bio from guys on dating apps. Yeah, I keep an eye out for major red flags and little clues about their personality, but I don't usually wonder whether we'd spend our Sundays watching football games, or worry about how much attention he'd be able to give my dog. But like, maybe I should?

My mom (as usual) was right: if a fellow's favorite hobby is bike-riding, my lack of cycling skills would likely become an issue at some point. And my love for dirty hipsters hasn't exactly served me well so far, so maybe I should switch gears and try a new cup of tea. Not to mention the fact that I could never date a guy my mom didn't adore — so perhaps I should apply her level of thoughtfulness (and occasionally aggressive judgment) to my swiping in the future.

You know what they say: mother knows best.