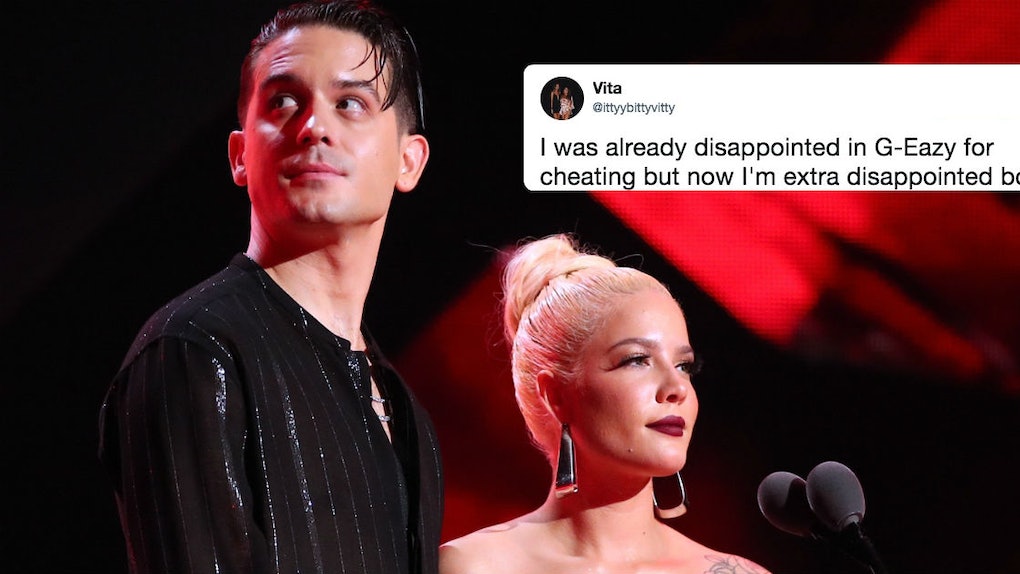 G-Eazy's "Power" Lyrics Throw Shade At An Ex, But Is It About Halsey?

It's been a tricky time for Halsey and G-Eazy fans. Their followers have been mourning their relationship and simultaneously trying to get to the bottom of what the hell went so wrong. After rumors began circulating suggesting G-Eazy might have cheated on Halsey, everyone is paying just a little closer attention to his moves. For example, he just released his first music video since the breakup for his song "Power" and fans wonder if there are actually some hidden innuendos here. To be frank, G-Eazy's "Power" lyrics clearly throw shade at an ex and folks are wondering if he's trying to send Halsey a message.

Technically, "Power" came out in May, a whole two months before Halsey announced their breakup on Instagram. So, while the two artists weren't exes yet, it definitely seems suspect G-Eazy chose this song for his first music video since the split. The lyrics that have everyone so worked up are:

Off the medicine, goin' hella dumb / My b*tch got replaced when I found a better one

Hm, hm, hm. Are you trying to say you're on to the next one, G-Eazy? Fans definitely had some feelings about the lyrics:

Halsey started a round of cheating rumors when she posted a scissor emoji followed by the phrase "pumpkin eater" on Twitter in the days after their breakup announcement. She's since taken the scissors down, but fans were quick to draw the link to G-Eazy's lyrics in their collaboration song "Him & I" when he raps the words: "Ever catch me cheating, she would try to cut my [d*ck off.]" As for "pumpkin eater," people think this could be in reference to the old nursery rhyme phrase "Peter, Peter, pumpkin eater," often recited as "Cheater, cheater, pumpkin eater."

For these reasons, G-Eazy creating the "Power" music video looks like it could be a response to Halsey's cryptic tweets, and potentially confirming he has moved on to someone new. Elite Daily reached out to both Halsey and G-Eazy's teams for comment on the cheating rumors but did not hear back by the time of publication.

Of course, it's possible he filmed the video a long time ago, too, and just needed some lyrics that rhymed. Plus, the video isn't much to look at. It's mostly G-Eazy, Nef The Pharaoh, and P-Lo riding around on a boat. Sure, sure, there's dancing girls and stuff, but that's par for the course when it comes to rap videos. Take a look.

Halsey first announced their breakup on July 3 by posting the following message on Instagram:

It's only been a few weeks, but this breakup already has serious twists and turns. For now, fans are just keeping their eyes on Halsey and G-Eazy and hope to have more answers soon.

More like this
22 Dua Lipa Lyrics About Love & Sex That Are Hotter Than Hell
By Corinne Sullivan
Who Is Billie Eilish's "Your Power" About? The Lyrics Call Out A Manipulative Ex
By Sydney N. Sweeney and Brandy Robidoux
Will BTS' Performance At The 2021 BBMAs Be Virtual Or Live? Here Are The Odds
By Noelle Devoe
Stay up to date