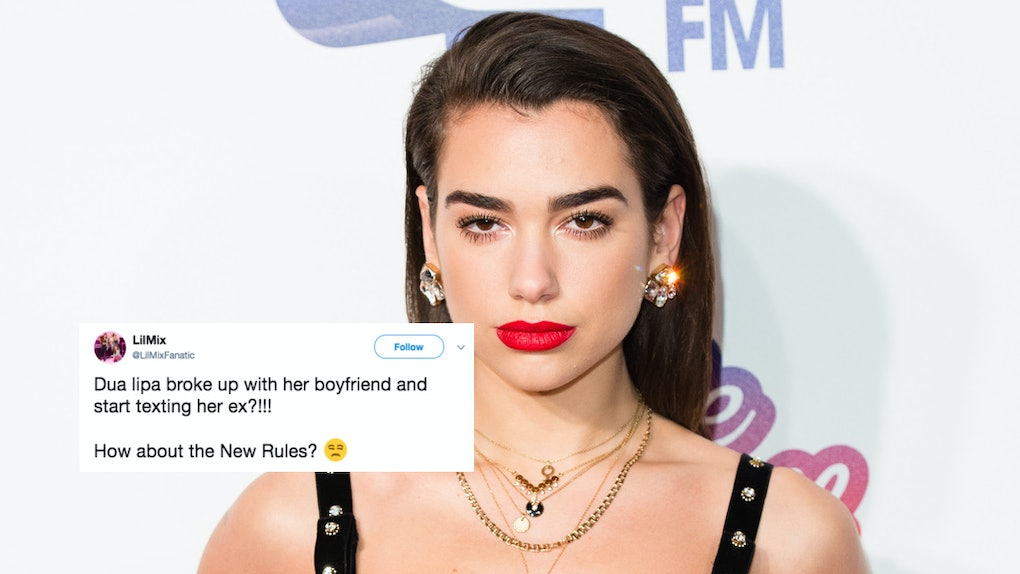 This summer was filled with all sorts of girl-power, breakup-themed pop anthems. There was Lorde's "Green Light," Kygo and Selena Gomez's "It Ain't Me," and my personal favorite, Dua Lipa's "New Rules." Outside of the ultra chic music video that made me want to move to Miami with my BFFs and only wear pastels for the rest of our lives, the song's inspiring lyrics are what I'm sure many young women have to thank for a significant decrease in late-night "miss u" texts sent to our exes. But alas, Dua Lipa is reportedly talking to her ex.

So here's the sitch, according to the report by The Sun. Dua Lipa was dating Paul Klein, a member of the rock band LANY. Dua and Klein enjoyed a brief romance until they recently called things off. “Dua and Paul had a really good time together but things just didn’t work out," an unidentified source claimed to The Sun. “She is very positive about the situation though, and has been pouring her emotions into her new album, which she has been writing in Jamaica and Los Angeles."

Here's an Instagram Lipa posted of the two of them looking super fashionable and cool (so on brand) back in December:

To cope with her breakup from Klein, it turns out Lipa reportedly started seeking comfort in another, more serious ex. Before Klein, Lipa was in a two-year-long relationship with Isaac Carew, a chef and model. “The break-up has brought back memories of Isaac, who she split with this time last year," the same source claimed to The Sun. “She has been messaging him again but she has been out of the country for the last few weeks so they haven’t seen each other.”

Here's a picture of Carew:

Now, before we all go crazy, Lipa has yet to confirm that she is, in fact, in contact with Carew. BUT, if the irony of her texting, of all people, her ex is lost upon you, let me give you a quick refresher of the lyrics that made her the pop sensation she is today. These are the "rules" she refers to in "New Rules":

One, don't pick up the phone

You know he's only calling 'cause he's drunk and alone

Two, don't let him in

You have to kick him out again

Three, don't be his friend

And if you're under him

You ain't getting over him

As you can imagine, fans were appalled to hear about the unofficial Patron Saint of Not Texting Your Ex reportedly texting her ex, and they weren't afraid to voice their frustration on Twitter.

But Lipa isn't here for the haters. No, instead she responded with the most chill clapback in the history of mankind:

In response to the hate, she told her fan to "get a grip."

I've got to say, I'm with Lipa on this one. She's only human. If you listen to "New Rules" closely, the chorus goes:

I've gotta tell them to myself

I've gotta tell them to myself

Did you see that last line? She struggles with her own rules! She knows she needs to take her own advice! That's what makes the song so awesome and relatable: She's going through all of the same post-breakup struggles we all do. She knows FROM FIRSTHAND EXPERIENCE how hard it is to resist texting her ex.

And finally, who are we to judge? Maybe Carew is her soulmate. Maybe he's her best friend. Maybe she's just bored and wants some attention. Either way, let's hop off her grill a little, shall we?