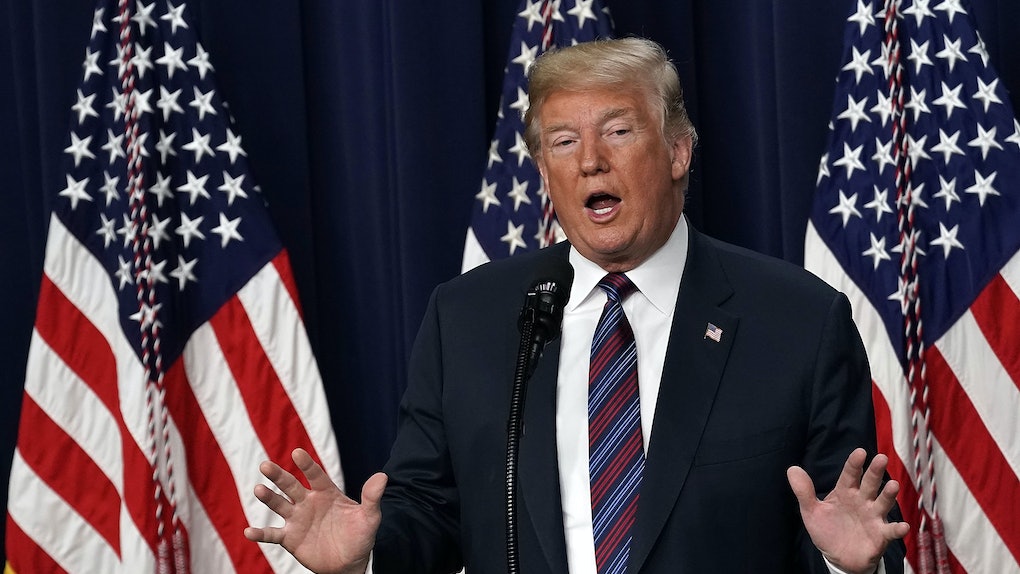 On May 18, a tragic shooting took place at Sante Fe High School's campus in Houston, TX, which killed 10 people. Since then, gun control advocates, students, and teachers have banded together to show support for those impacted by this horrific incident. However, Donald Trump's meeting with the Sante Fe shooting survivors might not go as smoothly as some may hope — possibly even thanks to his own words.

On May 31, Trump briefly spoke to reporters about meeting with the survivors while boarding Air Force One on his way to Texas. In his statement, Trump told reporters that he and the Sante Fe survivors would "have fun" during the visit. Um, what.

Trump's comment naturally sparked controversy, particularly among gun control advocate groups. Judging from his claim that he and the survivors would have "fun" during their meeting, I'm not sure Trump is ready for the probable discussions surrounding gun control and gun violence in schools. Plus, even though no one exactly knows what he meant by his comment, there's no doubt that it's highly inappropriate given the circumstances.

Another day, another comment from Donald Trump that truly makes me cringe.

On May 18, Sante Fe High School went into lockdown at around 8 a.m local time due to an active shooter on campus. Later, the Houston County sheriff's office announced via Twitter that the shooter was no longer active. However, officials later eventually confirmed that 10 people had been killed. Once news surfaced of the shooting, politicians, celebrities, and others expressed their condolences, and Donald Trump addressed the tragedy during a press meeting at the White House that day.

Unfortunately, I have to begin by expressing our sadness and heartbreak over the deadly shooting at Santa Fe High School in Texas that took place moments ago. We’re closely monitoring the situation and federal authorities are coordinating with local officials. This has been going on too long in our country. Too many years, too many decades now.

Trump is 100 percent right that these senseless tragedies have gone on too long. However, not much has been done so far to change the situation. The school shooting in Parkland, FL on Feb. 14 might have ignited the strongest call for gun control yet, but Trump hasn't done much to make changes to legislation or in Congress. Even though he recently tweeted about strengthening background checks while purchasing firearms, he hasn't taken the motion to Congress. In March, Trump stated that he believed teachers should be armed with guns in efforts to help stop school shootings, a highly controversial suggestion that many of the Parkland shooting survivors oppose. He also added that teachers could be given raises if they complied.

The Sante Fe shooting marks the 22nd school shooting in 2018, according to CNN. Even though Trump claims that his administration is determined to protect students, his comments about "having fun" while meeting with the survivors is questionable at best. After Trump spoke to reporters, many took to social media to address the president's comments, and judging from the responses people are not pleased.

I don't know about y'all, but Watts perfectly just summed up how I'm feeling about all of this.

Gun control and legislation might be the topic on everyone's minds on the moment, but that doesn't mean the fight isn't continuing. On May 22, conservative television contributor Tomi Lahren shared her thoughts on the Sante Fe shooting on Fox News, and to no one's surprise she passionately argued against gun control.

You can seize all the guns you want but truth is, there will always be evil in this world and evil people will always find evil ways to carry out evil things which is the EXACT reason many of us choose to be armed. It’s not about how much we love our guns, it’s how much we love the people we protect with those guns.

We may never know when gun control legislation will happen, but one thing is for sure: the fight for change in Trump's presidency is definitely not a "fun" one.