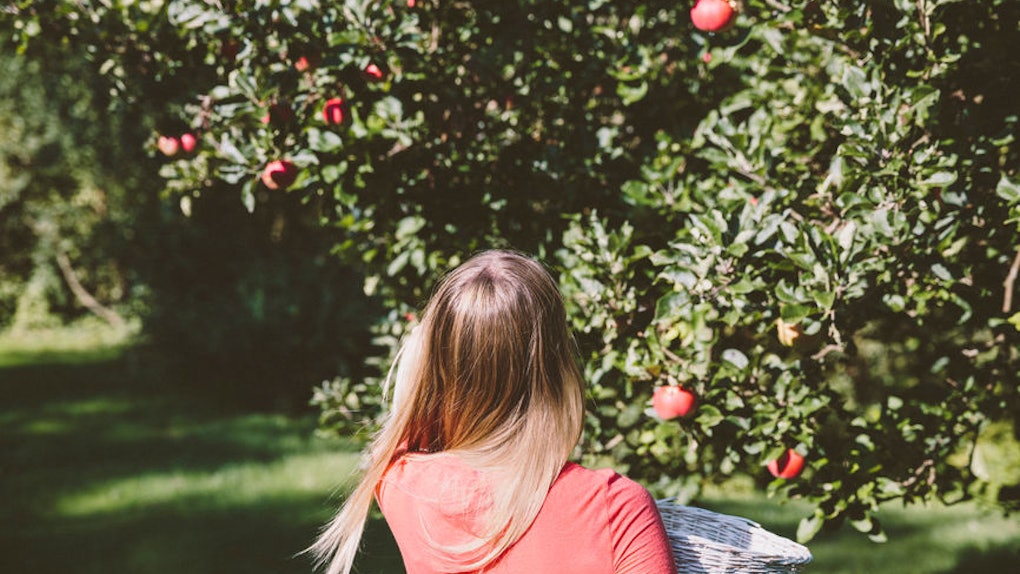 Do Men Like Apple Picking? 8 Guys On Why They Won’t Go

As September 22 approaches, many of us eagerly pluck our booties out of storage, excitedly reserve Sundays for watching football, stock up on pumpkin beer, and engage in the greatest delight fall brings — apple picking. Anyone who’s scrolled through social media between September and November knows this is a popular date activity, because the leaves start turning. And yet, the eternal question remains: do men like apple picking? Before you scoff and start tossing around the term #basic, consider this: the activity has a lot of bonding potential, it’s nostalgic AF, it’s an opportunity to spend some time in nature with bae before it gets too frigid outside, and naturally, it poses some pretty phenomenal photo ops. Besides, you leave your date with a barrel full of freshly picked fruit, and TBH, I can’t think of a better way to end a date than with bountiful food to enjoy together.

That said, not everyone is on board with the idea. There's a widespread stereotype that while girls love apple picking, men are slightly more averse to the idea. First and foremost, I want to call a bit of BS: This obviously plays into archetypical gender roles that should no longer exist and are problematic AF. Some guys may happily don a coordinating flannel and stroll through an orchard with you, while others may be straight up miffed as to why this is such a popular date come autumn — it truly depends on the individual.

Look, I’m just as confused by anyone who doesn't want to apple pick as you are — #DieHardNewEnglander over here, and full disclosure: I already have my apple picking date planned for the peak of the season. Apparently, some guys' reluctance often has nothing to do with not wanting to spend quality time with you, wishing they were watching the game, or not enjoying a crisp Granny Smith fresh from the orchard. I asked the non-enthusiasts why they wouldn’t indulge our fall fantasies. Here’s what they had to say.

Because you don't want to go apple picking, you want to wear flannel and have me take a picture of you picking an apple from a tree, then buy a cider donut. The apples are cheaper and tastier at the store.

Because all you end up doing is taking sh*tty 'candid' pictures and shoving them down everyone’s throat on the 'gram.

He's looking out for the professionals.

Because I don’t want to steal jobs from apple pickers.

Because it's boring. If we could shoot down the apples with Nerf Guns, I'd go. Until then, no thanks.

Because you're apple picking and I'm apple CARRYING. There's a huuuuuuuge difference.

He's only down on one condition.

Can I show up drunk? Can I eat as many apples as I want? I’ll go apple picking with you.

He thinks it's a waste of time.

The only way I'd ever go apple picking is if I had an apple tree in my own yard. There are literally hundreds of things I'd rather be doing than picking apples. I'd clean the garage before I picked apples because at least then I'm accomplishing something useful.

Because nobody asked me to. I'd be down to go. I used to live near an apple farm and the cider they sold was f*cking delicious.

There you have it, ladies and gents. Some men are still scratching their heads over why you'd pay to do the work yourselves when you can simply buy the fruit at the supermarket. Others are turned off by the idea of posing for and captioning for those Insta-bound pics. And some, well, they just don't see the point. Fret not, though, there are plenty of men who would be more than happy to participate in your favorite fall outing. Besides, if you're dating one who simply isn't into it, you can always go with your girlfriends and take the apples home to bake a pie or another autumnal treat with bae. Or, you know, there's always pumpkin picking.