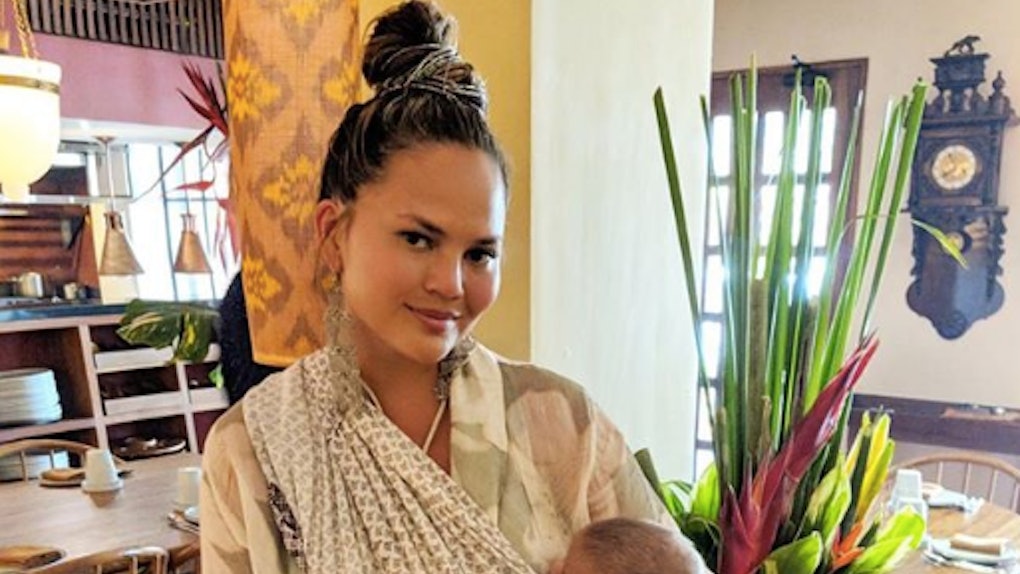 Do you feel like smiling today? You do? Well then great, you're in luck! Because instead of talking about gossip and drama and speculation, I'm here today to talk to you about babies. Actually, one baby in particular, and he's absurdly cute. His name is Miles, and his parents are Chrissy Teigen and John Legend — you may have heard of them. So if you're looking to find the latest news on celeb relationships or your favorite artist's new music, you're going to have to keep it movin', people. Because I'm here to gush about Chrissy Teigen's video of Miles, and the video of Miles only.

On May 17, Teigen announced that she had given birth to her second child, a son named Miles. I knew my heart would basically melt when I saw the first photo of little Miles, because I already knew how good Chrissy Teigen and John Legend were at making cute babies (Exhibit A: Luna). But I was unprepared for just how adorable he would be.

On May 20, Teigen took to Instagram to show off her new lil' bundle of joy, posting a picture of Miles and captioning the image,

Hello, world! This is Miles Theodore Stephens - We are drowning in his little peeps and nuzzles. Our household feels overwhelmed with love. Thank you for all your well wishes!

Since then, she's been doing a great job of keeping her fans informed of the cuteness that is her son by posting pictures to social media for everyone to squeal over.

And now, we're being #blessed with a video of Miles that Teigen posted to Twitter. It shows 2-month-old Miles scrunching his itty-bitty face, sticking his tongue out, going wide-eyed, and also looking like he's about to show everyone what the world's cutest yawn looks like.

I'm not even thinking about the idea of having children, but just looking at the video makes me say, "GIVE ME THAT BABY," because man, is he precious.

I mean, just look at him:

And, like any hilarious, self-deprecating mother, Teigen followed up her video with a separate tweet of a GIF from Family Guy that depicts a man shoving his wallet full of family photos into another man's face, reading, "Look at my kids!!"

I adore Chrissy Teigen on the regular, and she manages to make me appreciate her even more when, on July 30, Teigen took to Twitter and became very candid about her "mom bod" after having Miles. "Instagram is crazy," she wrote. "I think it’s awesome people have killer bodies and are proud to show them off (I really do!!) but I know how hard it can be to forget what (for lack of a better word) regular ol’ bodies look like when everyone looks bonkers amazing." In an additional tweet, she urged her fans to understand that even she can feel "insecure" about the way she looks:

also I don’t really call this “body confidence” because I’m not quite there yet. I’m still super insecure. I’m just happy that I can make anyone else out there feel better about themselves!

She even posted a video of her post-baby bod, writing, "mom bod alert!":

Bless up to Chrissy Teigen!