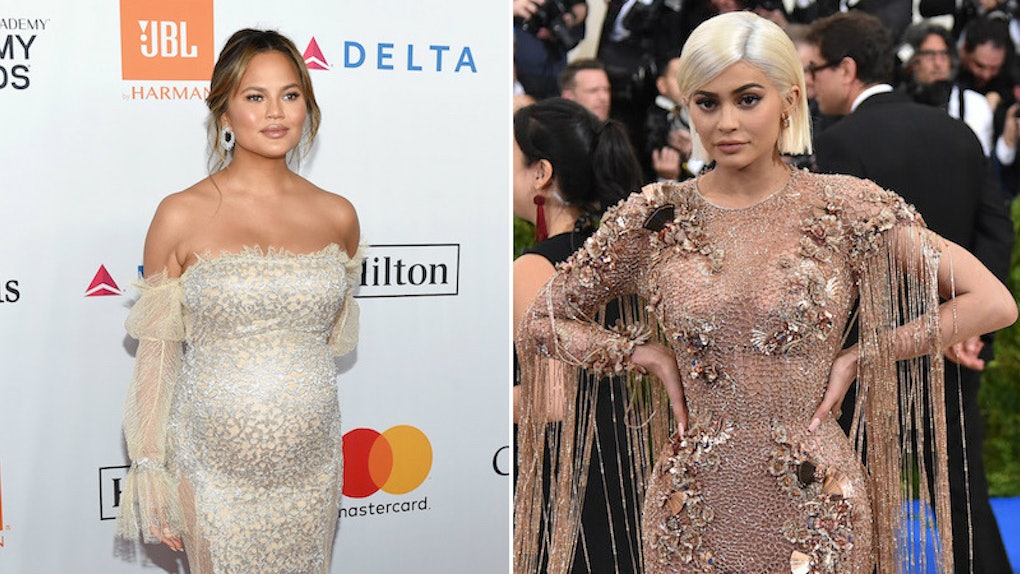 Happy February, dolls! It's now been almost five months — FIVE! — since we first heard the news that Kylie Jenner may or may not be expecting a baby with boyfriend Travis Scott, and we still don't have any official confirmation. Why, Kylie, WHY? This has definitely become one of the best kept secrets in Hollywood, and the lip kit mogul's friends and family continue to keep the 4-1-1 on lockdown. But sometimes it's all about what people don't say, and on the Feb. 1 episode of Bravo's Watch What Happens Live With Andy Cohen, Chrissy Teigen's reaction to Kylie Jenner's "baby bump" may have finally given us all the clue we've been looking for that the reality star is, in fact, pregnant. And thank G, you guys, because I was seriously starting to lose it.

The 32-year-old model mama and Lip Sync Battle host is known for being super real and candid — YAS, QUEEN — but when Andy sneakily asked her on WWHL how long she’s known that Khloé Kardashian is preggers, and whether or not she’s caught a glimpse of Kylie Jenner’s bump, Teigen took a big, pregnant (pun intended) pause before giggling and stumbling over an answer that wasn't really an answer.

I counted three "uh/ums" right there, how about you? Also, I love how Andy refers to Khloé Kardashian as Khlo-AY — totally doing that from now on. And I gotta give the talk show host mad props for the way he calls Teigen out here about how weird it is that no one will talk about Kylie Jenner's widely-rumored pregnancy.

"If it's so obvious and no one's saying anything, then it's obvious," Andy says.

So brilliant. I mean, the man makes total sense, right? And if you play this video back around 200 times like I did, you will find that you can kind of hear Teigen mumble "I know," in agreement.

Translation: SHE KNOWS THAT WE KNOW THAT SHE KNOWS!

So major! Of course, this isn't the first time Jenner's followers have tried to make a big ol' pregnant mountain out of a seemingly innocent little molehill. The internet went crazy on Jan. 31 after one fan took to Twitter to reveal the following information found on Wikipedia about an upcoming episode of Keeping Up With The Kardashians. Episode title: "It's a girl!" Episode description: "Kylie and Travis Scott begin the quest to determine what puppy to get and start decorating the nursery for the baby!"

DECORATING THE NURSERY, you guys! But sadly, this turned out to be false news. There was also that time fans swore they saw Kylie's baby bump in a video taken by TMZ of Jenner walking through a construction site with momager Kris and her bestie Jordyn Woods. And the time Twitter decided that SZA's Grammy performance of her song "Broken Clocks" — instead of the more popular "Love Galore," which features Travis Scott — could only mean that Scott was home spending quality time with Jenner before the rumored bambino's arrival.

And who could forget all the speculation following those recently released Calvin Klein ads, which featured the bare midriffs of every single Kardashina-Jenner except Kylie, whose entire body is either A) totally covered up in clothes or B) strategically draped in a red and white quilted blanket.

I see you, girl! I get that pregnancy is a super-special time in a (potential) mom-to-be's life — especially that magical first first time around — so I am totally down with Kylie revealing her reported big news in her own due time. I'm just over here hoping it happens sometime before the kid's 18th birthday, you know?