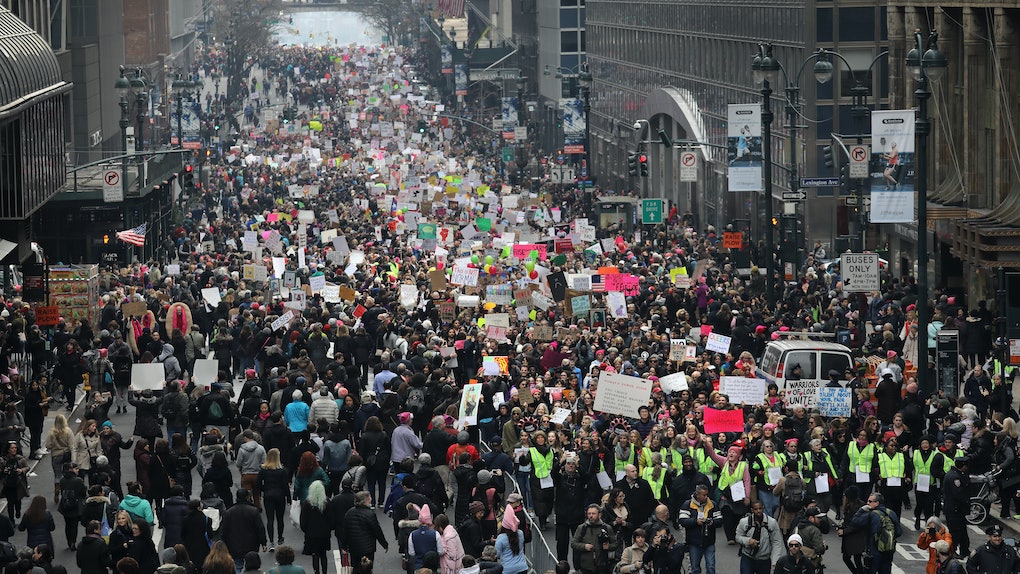 Can I Bring A Bag To The Women's March On NYC? Know These Size Regulations, First

Just after the importance of women's rights were, once again, pushed into outer space during Donald Trump's first year in office, feminists nationwide came together for several unforgettable Women's Marches in 2017. And if you're at all down for women's rights and equality, there's a likely chance you were one of the empowered attendees. If you're returning to the march again this year but forgot some of the rules, you might be asking some logical questions, like "Can I bring a bag to the Women's March on NYC?" Well, we have the answers you need — so look no further.

Since it might be your first glorious time marching in the Women's March on NYC, you probably haven't looked at the Women's March website yet. Along with a super informative and beautiful video from last year's march, they have a relatively detailed list of FAQ's, in which they describe what to bring.

In terms of bags, the organization advises attendees that the NYPD will be conducting what they call "soft checks." According to the site, it's similar to what guests go through at museums. I took a smallish backpack last year and I wasn't checked, but the site discourages large backpacks and purses. However, marchers are allowed to bring them. (That's honestly OK because large bags would be unpleasant for schlepping!)

In addition to advising no large bags, the site specifically recommends bringing water, any homemade posters you might want to take along, and an umbrella. From my personal experience, I'd also encourage attendees to bring extra writing utensils, because when I wanted to add something to my sign last year, a group of badass ladies came in clutch with a few extra markers. Since I was beyond grateful, I'd definitely advise doing the same.

Dressing warm and wearing comfortable shoes is probably the number one most important thing to remember for the Women's March, even if you have to layer up or hold off on wearing your new boots. Last year in NYC, I wore a winter jacket and a sweater, along with a hat, gloves, and sneakers — but it was January and still really freaking cold. So just make sure you prepare for wintery turmoil (preferably in a pussyhat), since the event is outdoors and will go on rain or shine.

There aren't too many other overbearing rules at the Women's March on NYC. While organizers promote free speech, they advise that speech and poster wording is chosen wisely, since the attendance of young children will be high.

Lineup time and location of the March on NYC is at 11 a.m. ET on Jan. 20 at 72nd and Central Park West, so make sure to be up-and-at-em bright and early. The fabulous group who also organized the Women's March on NYC in 2017, called the Women’s March Alliance, has once again stepped in to run this year's NYC march. The Women's March Alliance will also be hosting a variety of Post March Events, such as Art Actions, plays, and a variety of other activities. According to the event page, these will take place throughout the city, during, and following the 2018 Women's March on NYC. So get excited, because it's going to be an empowering time.