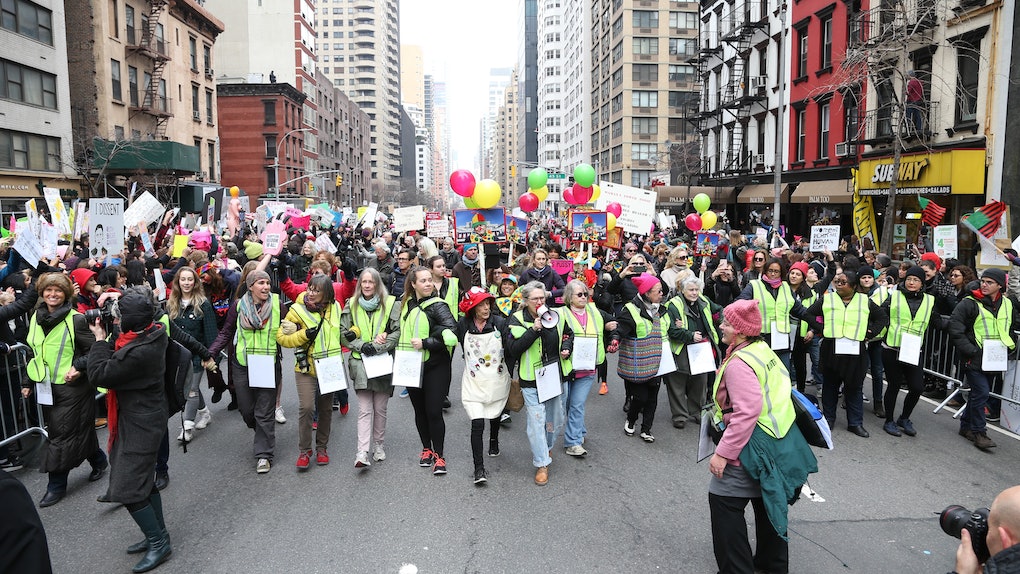 Who Organized The Women's March On NYC? The Same Group Is Going For Round Two

The second annual Women's March is officially coming to a city near you on the weekend of Jan. 20, 2018. Last year, at least 3.3 million people participated in the historic women's marches across the United States, so this year's got pretty big shoes to fill. The official Power To The Polls kickoff event will be held in Las Vegas, Nevada on Jan. 21, but people are anticipating the biggest march turnout to be in Washington D.C. and New York City, quite similar to last year. The Women's March Alliance, the same group who organized the NYC Women's March last year, is getting people ready for round two on Saturday, Jan. 20.

The Women’s March Alliance, independent from the Women's March group that organized the Washington D.C. march, is a nonprofit that was brought into existence last January "whose mission is to raise women’s voices through education and activism," per their site. Aside from the march, the group hosts educational workshop, training sessions, nonpartisan events, festivals, and rallies in the New York metro area.

According to the mayor's office, more than 400,000 people showed up on the streets of Manhattan for last year's march. So far, the Women's March Alliance Facebook event page has close to 113,000 users that have shown interest in the event. Meanwhile, one Twitter user projected an outcome of half a million for the New York march. On their website, the Women's March Alliance writes,

Over the past year, basic rights for women, immigrants, LGBTQ+, people with disabilities, the religious and nonreligious, people of color and even Mother Earth have struggled to survive under the weight of the current administration. America’s First Amendment has been challenged and healthcare for millions has been threatened. We must stand together to demand and defend our rights. We will not be silent! Join us and let your voice echo from the streets of New York City to the capital city. Show the world that red, white and blue are colors of tolerance.

On a more logistical note, the rally is expected to start around 11:30 a.m. and go on until 1:00 p.m. at Central Park West and 61st/62nd Street. The alliance has rounded up a group of prominent, female figures including Ashley Bennett, Halsey, and two surprise guests to make an appearance and give speeches at the rally. The march entrance will begin at 72nd and Central Park West in Manhattan, so people can start lining up at the main entrance around 11 a.m. The actual march itself will begin at 12:30 p.m. and will go on through Columbus Circle, east on to 59th Street, and south to 6th Avenue with exits at 45th, 44th, and 43rd streets. According to the event page, the march will officially end when the last marcher crosses 6th Ave and 45th Street.

The other event that is expected to have a large impact is the the Women's March kickoff event in Las Vegas, Nevada on Sunday, Jan. 21. The Women's March is launching a Power To The Polls national voter registration tour that will focus on registering new voters and supporting new female candidates for office in swing states. The march in New York, which will happen a day before the official kickoff event, will likely set a pretty high standard for all the subsequent marches.

On the group's website, the alliance talks about the aftermath of the 2017 Women's March and their hope for continuing the momentum. They wrote, "We’ve heard stories of women successfully demanding equal pay, becoming entrepreneurs, running for office, standing up against sexual harassment and even beginning to believe in themselves for the first time. We hope the 2018 Women’s March on NYC will have the same impact."

The group also provides ways to donate to the march (they say last year's march cost $60,000), check out post-march events in the New York area, and look at what other marches are being organized around the same time.

More like this
Ivanka Trump's Women's Initiative Failed Inspection, & It's A Mess
By Rhyma Castillo
Skateboarder Brighton Zeuner Never Thought She Could End Up At The Olympics
By Rhyma Castillo
Lil Nas X Is Going To Hell & He’s Making That Sh*t Gay
By Ciarra Jones
Stay up to date