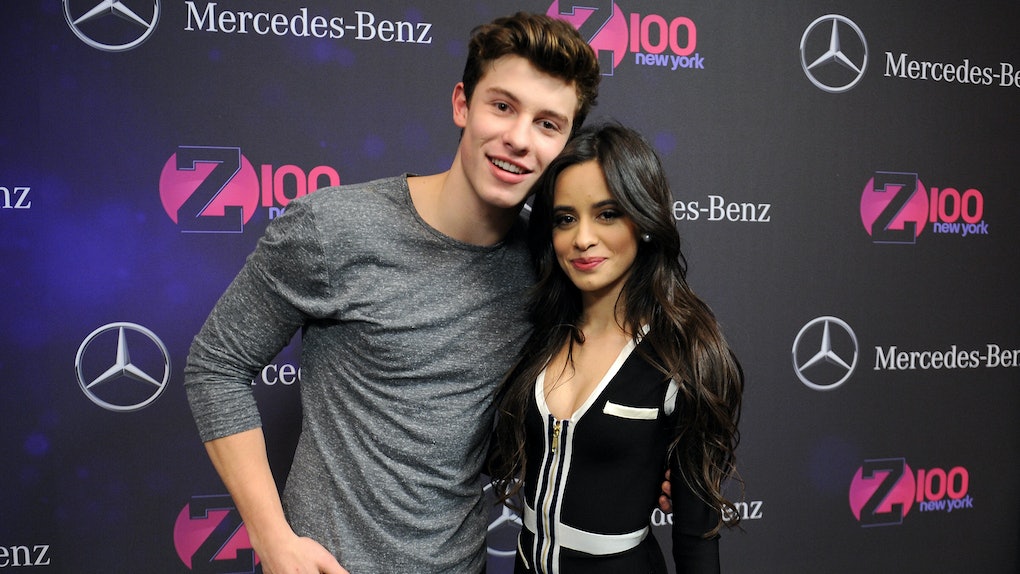 You know what they say: Just because you collaborate on a hit pop song with a mega hottie and then get super steamy with them in the corresponding music video does't mean you're actually dating — just ask Ariana Grande and Mikey Foster. I reluctantly believed Shawn Mendes and Camila Cabello when they insisted their relationship was purely platonic after dropping "I Know What You Did Last Summer" together in 2015. But now, following their "Señorita" collab, these two are changing their story. After years of denying any romance, Camila Cabello's quote about always loving Shawn Mendes has me feeling tentatively optimistic but also... a little confused.

At Elle's Women in Music event on Sept. 6, Cabello revealed to E! News that she has always had a soft spot for her fellow performer. "I love him with all my heart and always have," she said. "We've known each other for a really long time… We've always been there for each other." Which I'm sure is totally true — but was the affection she felt for Mendes before "Señorita" a brotherly love or a want-to-make-out-everywhere love? As much as I'd like to believe that these two have always been smitten, it's hard to say when they transitioned from friends to more-than-friends.

When asked about their relationship status by E! News just about four years ago, Cabello joked, "We actually hate each other in real life. We can't stand each other." Though the two often flirted on social media, they always denied the possibility of romance. During a November 2015 appearance on The Late Late Show with James Corden, Mendes claimed, "Every time I try to make a move she just swears me off. It’s never gonna happen." Cabello's response: "He friend-zones me! He calls me 'kid!' He has never tried to make a move." So when were they finally able to admit what everyone else knew all along?

Well, I guess they still have yet to admit their relationship is official. But what more evidence do we need? After that steamy video for "Señorita" premiered (and after Cabello's relationship with Matthew Hussey ended), the two have been spotted making out everywhere from a café in San Francisco, to a restaurant in Tampa, to a beach in Miami. As Cabello revealed in her Elle Women in Music interview, she's in love for the first time, and she's not afraid to show it.

"Honestly, this past year and a half was the first time I really experienced falling in love with another person," she confessed, later adding, "I’ve loved people from afar, but falling in love with someone and having feelings for someone but they don’t know.... It’s different." She didn't explicitly say that love was for Mendes, but did she really have to?

When pressed for details, Cabello told Elle that, for now, she's going to keep their love story private — though she's not going to hold back when it comes to showing her love for Mendes. "People can say whatever they want to say," she said. "They can speculate, but at the same time, we are going to live our own lives, enjoy it, and fall for each other like nobody is watching. That is how I want to live." Please continue to fall, you two. I'll be here watching and loving every minute of it.