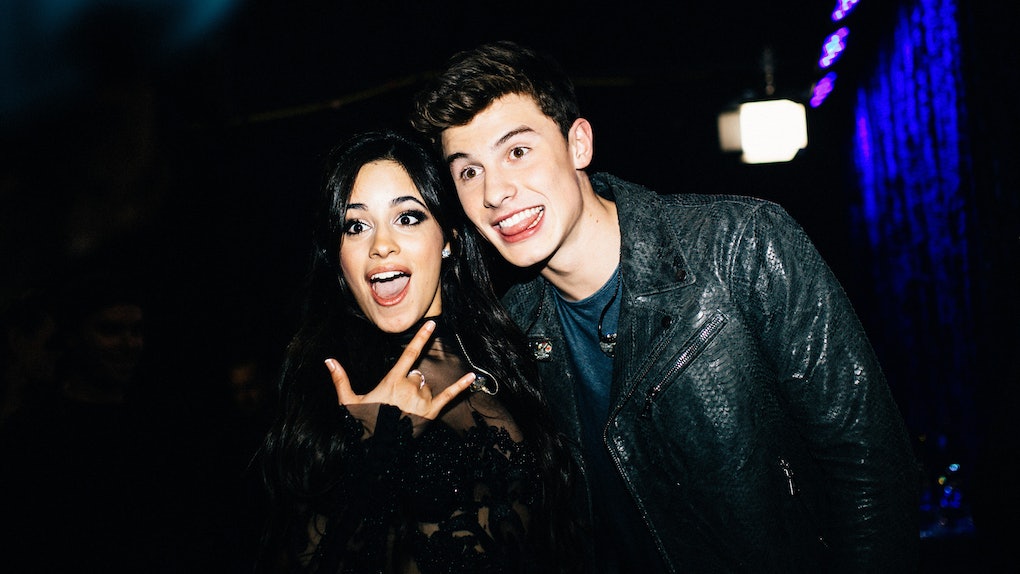 Two high-profile celebrities who may or may not be in a relationship may have just reportedly taken things to the next level. If you've been following reports of Shawn Mendes and Camila Cabello's potential romantic relationship, you might be excited to hear that a reportedly steamy kiss may have been exchanged between the two singers in sunny California. Shawn Mendes and Camila Cabello's reported kiss in San Francisco has people seriously stanning the potential couple — and it shows things may be heating up a bit. Mendes and Cabello have previously denied a romantic relationship, and have yet to confirm rumors of a reported romance.

On Saturday, July 13, pop culture website Pop Crave posted a video to Twitter, which reportedly shows Mendes and Cabello kissing at a cafe in San Francisco, California. Even though the video is taken from behind and the faces of the two people aren't super clear, one person is definitely wearing Mendes' staple a-frame tank and the other person seems to have Cabello's long, brown hair, which is often seen in a middle part. The video apparently depicts Mendes putting his arm around Cabello and going in for a long, intense kiss. Neither Mendes or Cabello have commented on the reported kiss as of publication. According to E! News, Mendes and Cabello were reportedly seen getting close at a local cafe in San Francisco even before the kiss.

Though their known relationship dates back to 2014, when Mendes and Cabello, who was then part of Fifth Harmony, opened for Austin Mahone, the most recent rumors that the two are romantically linked started circulating in 2018 when Cabello posted a photo of Mendes braiding her hair backstage with a heart in the caption. On June 20, 2019, the rumors were futher exacerbated when the two dropped a super steamy music video for their duet, "Señorita," which features an abundance of romantic and sensual scenes between the two. According to W Magazine, Cabello and her boyfriend Matthew Hussey reportedly broke up a few days after the music video was released, leaving even more room for Shamila's potential budding romance to grow even more.

Despite the growing evidence of their love, Mendes has repeatedly denied any romance between the two. He nipped any dating rumors in the bud before the 2018 Met Gala and also recently denied the two were dating at a fan Q&A in Los Angeles. When the fan asked, "Are you dating Camila?" Mendes shook his head no, even though the couple has reportedly been spotted holding hands and kissing.

Fans on Twitter have mixed reactions about the singers' relationship status, with some people saying that the two are definitely dating and others expressing some skepticism.

One Twitter user, for example, wrote that they believe the two are definitely dating, adding, "[Y]ou can obviously tell by the body language and signs. They are not fooling me saying that they are just friends. They are a couple."

Whether or not these two are actually a couple, it's definitely hard to deny the intense chemistry they share, even as "just friends."

More like this
Kendall Jenner's Response To Haters Who Say She's Too Privileged To Have Anxiety Is On Point
By Michele Mendez
As @Royal_Suitor, Here's Why I'm Dedicated To Defending Harry & Meghan
By R.S. Locke
‘My Policeman’: Release Date, Cast, Trailer, Plot, & More Info
By Abby Monteil
Stay up to date