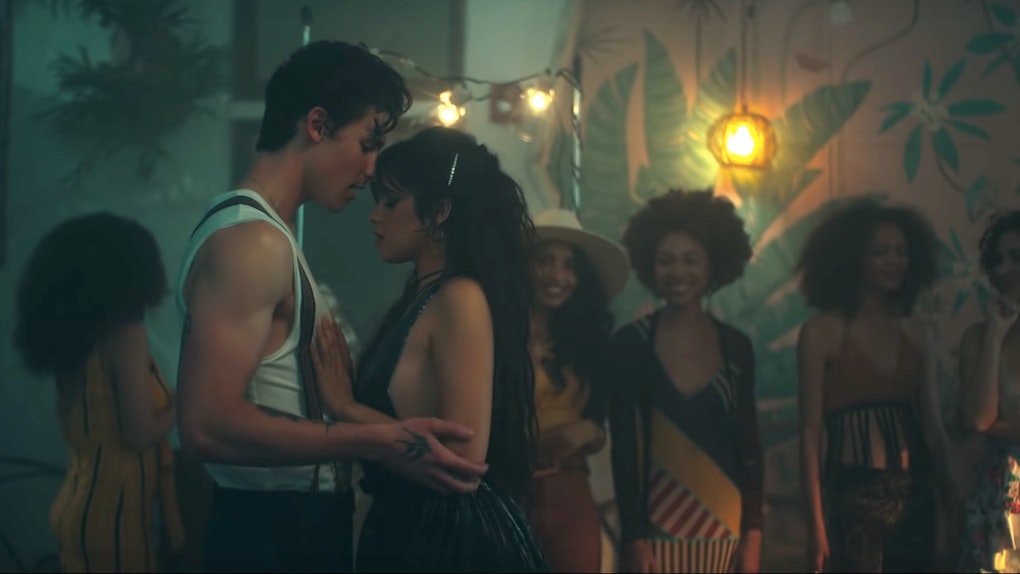 If there's one reported couple who's really turned up the heat this summer, it's Camila Cabello and Shawn Mendes. Neither party has verbally confirmed they're actually a couple, but given all their recent outings, sweet social media posts, and the bajillion photos of them kissing in public, it seems pretty clear they're into each other. Nevertheless, I asked a body language expert to analyze Shawn Mendes and Camila Cabello’s body language in “Señorita” to see if there were any clues the two might hooking up IRL. Turns out, it's seriously steamy, and could've been pointing to a summer fling all along. Elite Daily previously reached out to reps for both Cabello and Mendes for confirmation on their reported relationship, but has not yet heard back.

Again, neither Mendes nor Cabello has confirmed their reported, so they very well might just be very, very close friends. However, they have been spotted engaging in all kinds of PDA since the release of "Señorita," so it really wouldn't be shocking (like, at all) if they were to verbally confirm sooner rather than later. Until they do, body language expert Traci Brown looked at the pair's sexy music video to see if there's any chance he may be calling her his señorita IRL.

It looks pretty promising, folks. Of course, this is a music video, and the two singers were playing roles, but just how hard did they have to try to make it look real? According to Brown, not all that much.

1. Cabello and Mendes don't look super in love, but the sexual tension is off the charts.

The "Señorita" music video is super sexy. The characters that Cabello and Mendes play aren't in a long-term relationship, but they have a steamy, intense love affair. According to Brown, that's pretty obvious in their body language. "He's showing signs of wanting to control her," she says. "He's grabbing her shoulders and hand, not really holding her like you would if you wanted tender romance."

The video is all about a torrid love affair, and the two performers seemed to really dive into their roles. "We see him guiding her arms," she says. "Placing her hands on his chest, like she's doing, isn't what someone would do if they want to pull someone close."

Perhaps Cabello was leaning into the storyline here, because if the video was a real-life situation, this particular body language clue doesn't scream "hold me closer."

In the scene where Cabello and Mendes finally get it on in the bed, Brown says their body language shows they're ready for it. In fact, they're tingling with lust. "Looks like there's lots of anticipation here," she says. And while they may be excited, "they're taking the moment in," she adds.

4. It doesn't scream love, but it does scream lust.

Brown says that in this moment, Mendes' body language indicates "he is controlling her again, just behind her with his hand guiding her chin." However, Brown adds that they both seem super into it. It's pretty clear: She's letting herself be seduced.

So, are they are real couple? According to Brown, chances are high, as there seems to be some consistency in their actions. However, even though it looks hot AF, "I'm not sure it spells a great, loving and balanced relationship," says Brown.

Until they confirm their relationship, it's impossible to know for sure if Shamila's reported love affair is a summer fling, or if they're totally endgame. Whatever the case, there's no denying they have a ton of chemistry, and their body language in the "Señorita" music video proves it.