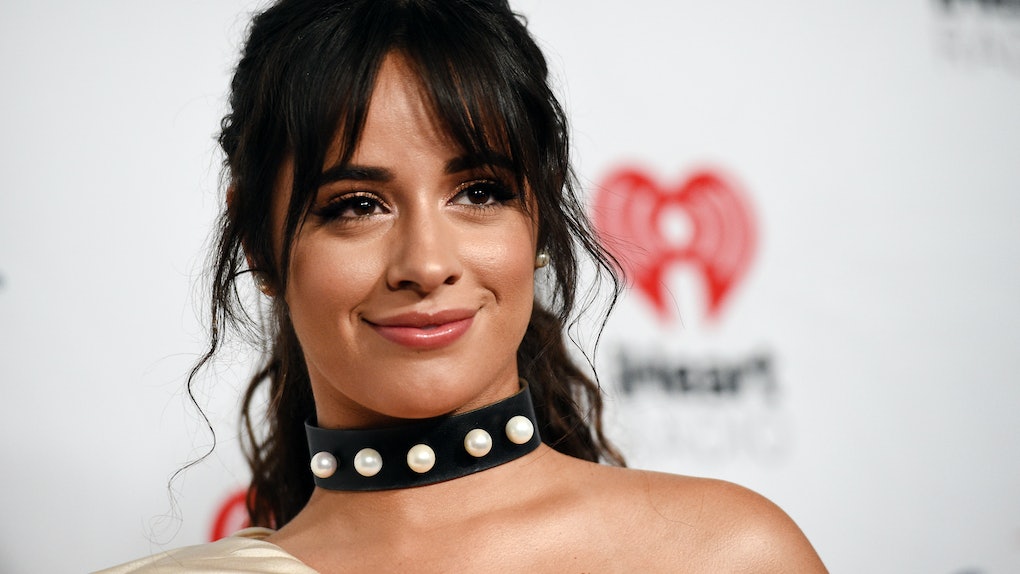 For as long as Camilizers can remember, the singer has had long, luscious locks. But in a recent Instagram post featuring her new look, Camila Cabello revealed a much shorter 'do. ICYMI, Camila Cabello's Instagram about her short haircut showcased her daring move.

The "Havana" singer showed off her freshly chopped 'do on Instagram on Thursday, Oct. 22. "LOST MY SHORT HAIR VIRGINITY!!!!," the star wrote. "I’ve had long hair all my life it’s TIME TO FEEL THE AIR ON THESE SHOULDERS BABY. photo credit: @shawnmendes." The pic shows Cabello with a shaggy new 'dp cut at the shoulders, wearing a white off-the-shoulder top. After posting her shoulder-length haircut, Cabello posted an adorable picture of her and Mendes looking lovey-dovey, captioning it, "heheheheheh."

By now, the singers have demolished those breakup rumors that began back in August. From sweet posts to even sweeter statements about each other, it's clear that Shamila is going strong. On Sept. 30, Cabello raved about Mendes, posting a clip of the track "Intro" from his new album Wonder, which is set to release on Friday, Dec. 4. She wrote, "The world could use some magic, beauty, and Wonder always, but especially right now. @shawnmendes what a gorgeous gift to the world." She continued, "He’s crafted this album with every last bit of his soul, his spirit, and his essence with the purest of intentions. My love, I’m so proud of the person you are and I’m so excited for people to see and hear your heart."

Mendes also revealed his feelings for Cabello in the trailer for his new Netflix documentary, In Wonder, which debuts on Monday, Nov. 23. "A song comes on the radio or something and I'm like, 'Everything is about you,'" Mendes said, recalling a conversation with Cabello. "They've always been about you.' She goes, 'what do you mean?' I'm like, 'they're all about you. Like, every song I ever wrote.'"

He also told Radio.com on Oct. 1 that Cabello's taught him to be more vulnerable. "I thought that I was a pretty open, emotional, guy until I started being in a relationship with someone that I really, truly love," he said. "[Then] realizing that, 'Oh no, I really have this big ego, and I don't want to show her that I'm hurting and I don't want to show her that that offended me, and like I want to be the man, and I want to be strong in this relationship,'" he continued. "It actually was hurting our relationship."

While you have to wait for Mendes' album, it's clear Cabello was a big part of its inspiration. He told SiriusXM’s The Morning Mash Up on Oct. 4, "[Camila] really was a champion for this album and I remember back when I first started a lot of the concepts and they felt a little bit intimidating, she was like, ‘Go, keep going, keep going.’" He added, "She would do this thing like once a month, ‘Hey, just a reminder, this concept you’re on is incredible. It’s going to make people feel something really special. Don’t stop. Don’t stop. Don’t stop.’"

Not only does Cabello have a super supportive boyfriend, but she's also embraced taking risks by cutting her hair short for the first time. Look for Cabello to turn some daring new looks with her shorter hair in coming weeks.