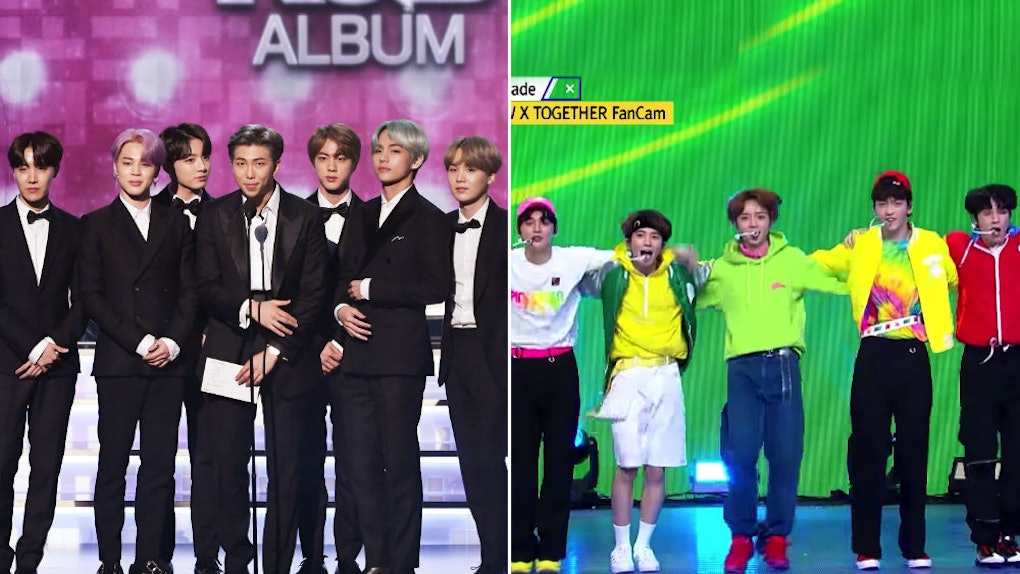 BTS & TXT's Quotes About Each Other Highlight Their Growing Bond

Raise your hand if you feel personally connected to the entire world of K-Pop. Now that literally everyone's hands are raised, let's focus on my two faves: BTS and TXT. Yes, the pair both share the same label, BigHit Entertainment, but the energy from both of these groups is just so unreal. And don't think for a single second that there's any form of sibling rivalry going on between the two boy bands — it's actually quite the opposite. The amount of BTS and TXT's quotes about each other is undeniable proof that both groups are super supportive of the other.

While I'm sure you're well aware of the BTS boys by now (Jin, Suga, J-Hope, Rap Monster, Jimin, V, and Jungkook), you may not have heard about TXT yet. The band TXT (which stands for Tomorrow x Together) is made up of five guys: Yeonjun, Soobin, Hueningkai, Taehyun, and Beomgyu. According to a statement from BigHit Entertainment, "TOMORROW X TOGETHER is a bright and youthful boy band where each member is different from one another, shining in their own way to create a synergy."

"Just as how their name suggests, the different members have all come together under one dream in hopes of building a new tomorrow," BitHit said.

And, like I mentioned before, there is zero animosity between the two bands that live under the same label. If I'm being honest, they're actually nicer to each other than most siblings are, so that's saying a lot. Let's take a look at some precious quotes from these boys that will fill your heart with pure joy.

1. When BTS' Jin gave TXT a shoutout at the SMAs.

On Jan. 15, BTS attended the Seoul Music Awards and accepted the Bonsang award, which recognizes the most influential artists of the year — NBD. While accepting their award, Jin gave a speech and decided to go just a bit off script to give TXT a shoutout.

"The company (BigHit) didn't tell me to say this," Jin said, according to a fan translation. "But, our Hoobae (junior) will debut soon. Please keep sight of them."

This is the kind of content I need in my life right now.

2. When BTS casually mentioned TXT at the Grammys.

On Sunday, Feb. 10, BTS made music history by hitting the stage at the 61st Grammy Awards to present the award for Best R&B Album. It was the first time that a K-Pop band presented at the Grammys ever, so clearly, it was a huge honor for the BTS boys.

While on the red carpet, Entertainment Tonight spoke to the group, and asked what advice they would give to TXT.

"Your label has just launched another brand new band as well," the interviewer said, then asking, "I wonder what kind of advice you'd give them, having achieved so much success already, and they're at the start of their journey?"

RM replied in the best way possible, saying, "We still try to stay ourselves, we could be proud ... but we just still try to keep on with what we're doing." He continued, saying, "For example, we've been staying up all night to work for our next album, right before the flight. So I think being ourselves, waiting for the opportunities and challenges are most important."

Did you hear that, TXT? BTS just wants you to be yourselves, and that is the sweetest thing I've heard all damn day.

3. When Jimin congratulated TXT on their debut, and TXT thanked him for his support.

TXT officially made their K-Pop debut on March 4, and released their first album, The Dream Chapter: Star, as well as a brand new music video for their first single, "Crown." Being the adorable person that he is, Jimin took to Twitter after the music video dropped, congratulating them on their achievement.

"We will support you going forward as well. Hwaiting. I sincerely congratulate you on your debut. #JIMIN #TXT," Jimin wrote, according to a translation by Koreaboo:

Just hours later, TXT responded to Jimin's supportive tweet, writing, "Hello Jimin sunbaenim!! We are TOMORROW X TOGETHER! From now on, we will do our best!! Thank you for cheering us on/supporting. Please watch over us well!!"

4. When the TXT boys all praised the BTS members.

In an exclusive interview with Soompi on March 5, all five of TXT's members opened up about their group, and almost all of them had something to say about the band they share a label with.

TXT's Beomgyu talked about how starstruck he is whenever he's around the BTS boys (cue squealing), and what it means to see them thriving as a team.

"I’m a huge fan of BTS," he shared. "Whenever I run into them at the agency, my heart trembles and I become nervous. Whenever I see them, they also emphasize the importance of teamwork... They said, 'Think of the team first,' and, 'Become a great artist.'"

They are senior artists who are like the sky above us. While recording we watched a year-end show and heard them mention that we are debuting soon and it’s such an honor to have them also mention us on the red carpet.

Are these guys not the most precious people on the planet?

Soobin also talked about how it's an "honor" to be called BTS' junior group (and let's be real, he's not wrong). He said, "It’s an honor to be called that. I’m very thankful. We’ve had worries, but we will work hard to not cause any harm to their reputation."

And lastly, Hueningkai talked about how grateful they all were to have BTS to look up to, and how incredible it was that they flourished in spite of some "difficulties." He said,

Since we were able to see our seniors achieve so much after going through difficulties, it’s an honor and we respect them. We will work hard.

5. When Jungkook officially became a hyung.

If you're not already swooning, you might want to take a look at the first photo of BTS and TXT together, because it will fill you with so many good feels.

Look at them! Just look at them! TXT captioned the photo, "Thank you so much for giving us time and saying such nice things to us with good advice. We will do our very best to be your juniors! We love you, our sunbaenims," according to fan translations.

But it's Jungkook's response that really left the BTS ARMY shooketh.

"This is Jungkookie Hyung. Don't fall sick, and fighting (all the best) for the activities," he wrote, according to fan translations.

Considering Jungkook is BTS' golden maknae, the idea that he's TXT's hyung now has the ARMY feeling all types of emotions!

6. When Jin hinted at a future collab concert.

And if ALL of the aforementioned information doesn't make you want to jump up and down with joy, consider this tweet from fellow BigHit label-mate, Lee Hyun, who thought of the brilliant idea that BigHit should have a joint "BigHit family concert," to which BTS's Jin smugly responded with a simple, "Hm," according to fan translations. Kind of like the "curious" emoji in written form:

The BTS ARMY took the exchange to mean that maybe — just maybe — Jin's down for a joint concert. JinHit RISE.

Please wake me up ONLY if and when this happens.

More like this
These Singers Were Accused Of Copying Other Artists In Their Music Videos
By Brandy Robidoux
Olivia Rodrigo's "Drivers License" & "Good 4 U" 'SNL' Videos Prove She's A Star
By Abby Monteil
Is Olivia Rodrigo's "Good 4 U" About Joshua Bassett? Fans Are Convinced
By Michele Mendez
Stay up to date