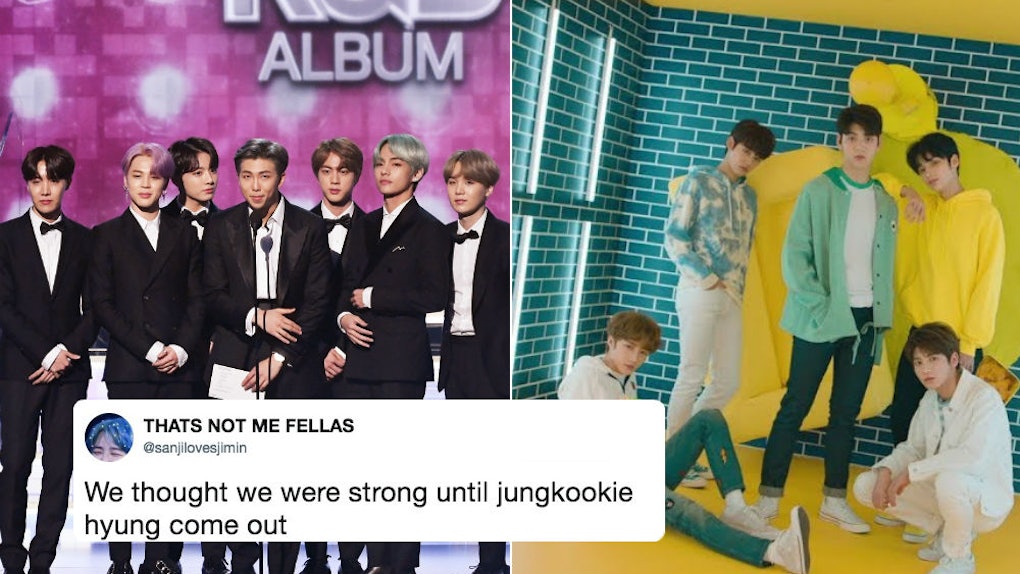 ARMYs, an emotional moment you could not possibly have prepared for has come. Just days after TXT dropped their debut album, The Dream Chapter: Star, they finally met their industry-vet label mates, BTS. If you're an ARMY, the first photo of BTS and TXT together will already fill you with so much pride. I mean, the boys of TXT look so happy to be sat beside the biggest boy band in the world and able to call them their sunbaenims. But when you see Jungkook's tweet to TXT... dang. What can I say, other than it will break you? But, like, in the best way possible.

In a tweet posted March 7, TXT shared a glorious photo of themselves flanked by none other than world's-biggest-boy-band BTS. According to fan translations, the caption accompanying the tweet read, "Thank you so much for giving us time and saying such nice things to us with good advice. We will do our very best to be your juniors! We love you, our sunbaenims."

In case you're wondering, the word "sunbaenim" is a Korean phrase that means "senior" — not in the elderly sense, but in the sense that someone went to the same school before you did or, as in this case, worked at your company before you did.

You're probably emotional already seeing TXT write about their new sunbaenims with so much love and appreciation (can you imagine all the amazing advice they probably dropped on these kids?). But just wait until you see Jungkook's response.

Shortly after TXT shared their photo with BTS, Jungkook RT'd it with the most supportive message. According to fan translations, it read, "This is Jungkookie Hyung. Don't fall sick, and fighting (all the best) for the activities."

You might not know this if you're new to this whole K-Pop thing but, being the youngest member of a K-Pop band is no small thing. The youngest member even has his own name — the maknae. And what that essentially means is that you're showered with endless love, support, and protection from your older bandmates.

"Hyung" means older brother, but it's not just used to refer to actual blood-related relatives. In Korean culture, males refer to other males that are older than them as hyung. So, over the past six years of BTS' existence, Jungkook has always referred to V, Jimin, RM, J-Hope, Suga, and Jin as his hyungs, but no one ever called him hyung.

Now, with the introduction of TXT into BigHit's ranks, that's all changed. And Jungkook calling himself hyung certainly sent the BTS ARMY into a tailspin of emotion.

It's nice to see Jungkook taking his new role as a hyung so seriously, but can he slow his roll a bit? It's just that I was not emotionally prepared for this.