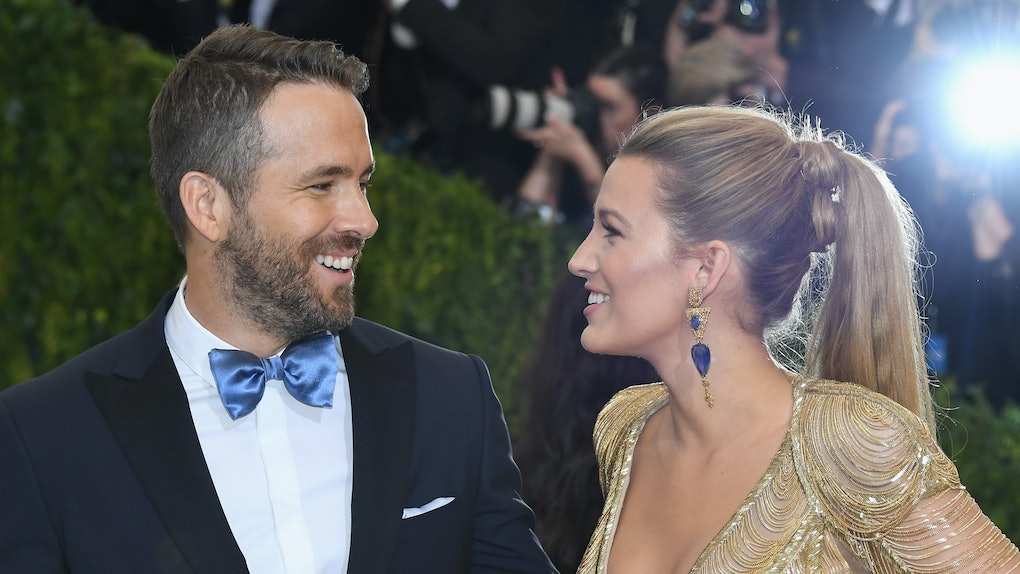 Blake Lively and Ryan Reynolds are the world’s most perfect celebrity couple, and I will fight anyone who dares to challenge that. Between the sweet interviews, the amazing red carpet photo ops, and the never-ending, incessant trolling of each other, the two of them are truly #relationshipgoals. Which is why Blake Lively’s birthday message to Ryan Reynolds is so absolutely perfect.

It’s not a secret that Lively and Reynolds are Hollywood couple gold (and #goals too). They say sweet things about each other, have an adorable meet-cute story, and just generally seem like they’re really, really in love. Reynolds even took to Humans of New York to talk about how awesome he thinks his other half is, which is pretty impressive when it comes to racking up brownie points with your parter.

They’re even impressive when it comes to the less glamorous parts of romance: In an interview with Glamour, Lively talked all about how the reality of a relationship isn’t always the supposed perfection that the cameras capture when they’re all done up. But, if you ask me, the best part about their relationship is how mercilessly they troll each other.

Which, you know, wasn’t at all the case when Lively took to Instagram on Oct. 23 to wish her hubby a happy birthday. Not at all. Instead, she wrote a simple, loving message to go with a photo of her favorite Ryan.

.... well, Blake, I certainly can't blame you for having an attachment to the Baby Goose, but, uh, that's not your husband. Mostly. (Also, Ryan Gosling's birthday isn't for another three weeks, you have time.)

Yep — Lively posted a touching birthday message to her husband, in which her husband was entirely cropped out of the photo.

And it feels... awfully familiar? I wonder why that could be? What might it be reminding us of?

Oh yeah. The fact that Reynolds did exactly the same thing to her on her birthday, back in August.

All right, I'm saying it: this is the very definition of perfect revenge.

It's appropriate in scale. It's well timed (in that "revenge is a dish best served cold" way), since she waited long enough that he had probably forgotten about trolling her on her birthday entirely. It one-upped him by featuring a photo of Gosling, who as we all know is the heartthrob of a generation. And honestly, it's just plain hilarious.

I'm a firm believer in a little gentle mockery in a relationship.

Which, honestly, is probably why I love Reynolds' and Lively's back and forth so much. The two are known for being silly, teasing each other, and — most importantly — appreciating the other's sense of humor, even if they're the butt of the jokes. (Which is often.)

And this latest back and forth is just the most perfect example. Because while you could say she just took the same thing that he did and did it again (except, you know, better), I look at it and say, it's two people who get each other. Which is pretty beautiful, whether that means of "getting" each other is adorable, loving sentiments, or merciless trolling. Romance is in the eye of the beholder, y'all.

I mean, look at how they talk about each other. In an interview on The Conan O'Brian Show, Reynolds talked about Lively's sense of humor. He said,

My wife is the real, I mean she is a mercenary. At one point in the middle of the delivery, the doctor's cell phone went off and she said, 'Oh no. Go ahead, take a personal call. Feel free.' She was cracking jokes in the delivery room.

And then there's this, which Lively said to Marie Claire about why she married Reynolds in the first place:

I knew he would always be my best friend for my whole life. That was the biggest thing to me. I'd never known anything like the friendship that I had with him. I could like him as much as I loved him.

And apparently, that includes shameless trolling.

Happy birthday, Ryan Reynolds. I hope your wife's gift is some ointment for that savage burn.