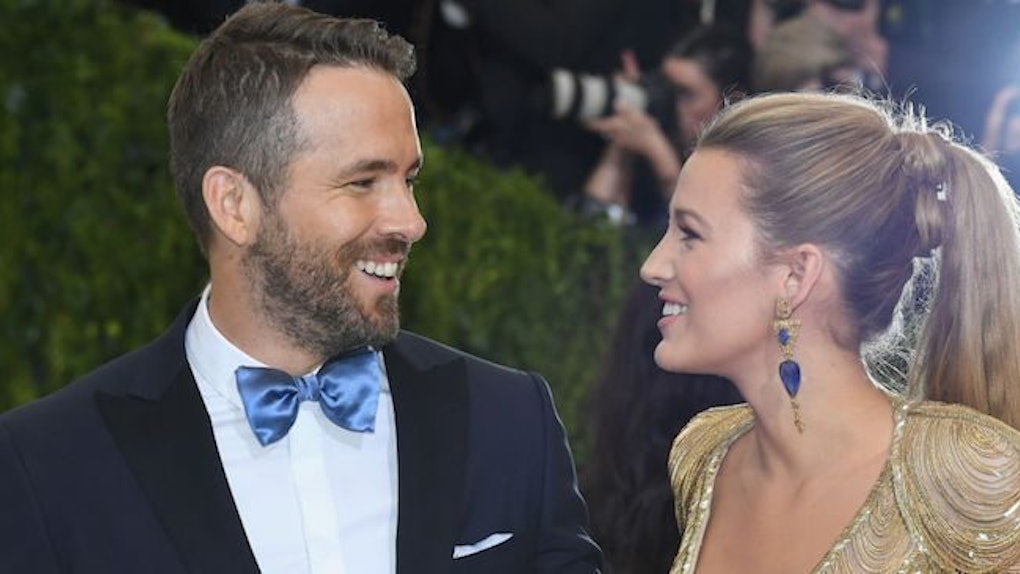 Blake Lively is sick of people saying her life is "perfect." In a new interview, Blake Lively talks about Ryan Reynolds, their marriage, and how their lives and relationship are far from the picture-perfect image we make them out to be. We've all ogled over the photos of Ryan Reynolds and Blake Lively on red carpets looking lovingly into each other's eyes, wishing it was us, but Lively says that narrative is something we project onto them.

According to Lively, her marriage has its own share of difficulties, even if they are "champagne problems" like she says. People on social media believe the Lively/Reynolds family is perfect and does not struggle, but Lively says that's just not true. She and her husband struggle with being very shy people in very public roles, as well as other things, the star admits.

In the interview with Glamour, when asked how she feels when people online say she has the perfect body/husband/family/life in general, Lively said,

It's nonsense. It simplifies people. Not all men, but a subsection of men, have a desire to understand and control women. To do that, you have to paint them into this thing you can wrap your head around. But women are complex. It also is [a reminder] that what you see in the media is not real life. The night before an interview, I have complete anxiety: How is this person going to spin me? So when you read, 'Oh, she's got a perfect life,' or 'Her life is crumbling' — they pick narratives for everyone. And the narratives stick.

Lively revealed her and Reynolds' shyness end up hurting them a lot. (I wouldn't expect anyone to say Ryan Reynolds is shy, but I totally get how being an actor could help a person cover up that shyness.) She said,

My husband and I are really shy people who express ourselves best when we're acting, when we're hiding as someone else. So the fact that very shy people have to share that shy person with the world — and are sometimes hurt by it — it's very weird emotionally. Anyway, champagne problems.

One thing Lively isn't shy about is how much she loves her family, flaws and all. She revealed that she and Reynolds never work at the same time so one parent can always be with their daughters, James and Inez, while the other is filming, but filming is still a family affair, meaning she and the babies are up in Vancouver with Reynolds while he films Deadpool 2. And when Lively starts filming her next project, Reynolds and the kids will also be in tow. She said,

My husband's shooting Deadpool, and I'm here for the full shoot. We don't work at the same time. We're here as a fami­ly, then we'll pack up, and I'll go do a couple movies.

I won't say this is a perfect thing because I know Lively hates it, so I will instead say that the Lively/Reynolds family being together while filming is a nice thing to know. Lively also says she treats Reynolds like she treats any of her girlfriends when it comes to dealing with conflict. She said,

In other relationships, if something came up, I would call my girlfriends or my sister, and say, 'Hey, this is what he did — what should I do?' Where with him, we were friends for two years before we were ever dating. And I treat him like my girlfriend. I'm like, 'Hey, this happened. It upset me. This is how I feel. What do I do?' And he does the same for me. He treats me like his best buddy.

I won't say this is perfect, but it is v healthy! You go, Blake and Ryan. Keep doing you and that whole conscious communication thing. I dig it.

When it comes to their daughters, Lively said she's still learning to navigate motherhood and she hopes she's able to raise her daughters to be as powerful as they can be. She said,

Sarah Silverman does a great bit that I'm going to butcher: 'Stop telling little girls that they can do anything. They already believe they can do anything. It opens the door for questions….' We're all born feeling perfect until somebody tells us we're not. So there's nothing I can teach my daughter [James]. She already has all of it. The only thing I can do is protect what she already feels.