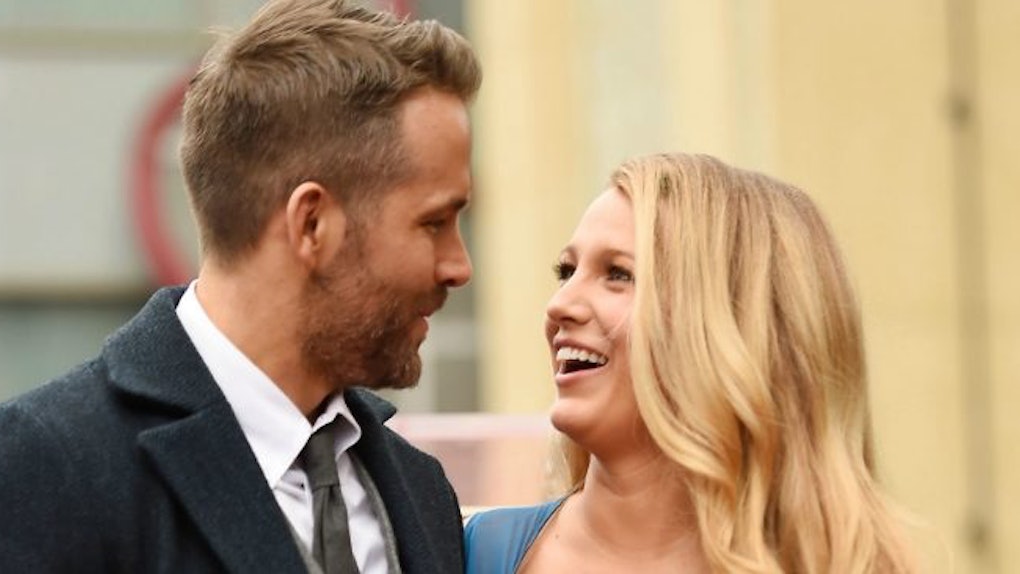 Love and relationships are tough, but some celebrities make it look so, so easy. Case in point – Ryan Reynolds and Blake Lively. While no marriage is perfect, Reynolds and Lively look like they're getting pretty damn close. Ryan Reynolds' quotes about Blake Lively will definitely make you feel a lot less cynical about love. Heck, it might even turn you into a hopeless romantic.

Every inch of their journey together is dripping with sweet moments, and I have the proof. Below are eight quotes from Ryan Reynolds that prove their love is so real.

1. That time they went on a double date.

Let's start at the beginning — their first date. Reynolds and Lively met when they played love interests in Green Lantern. At the time, they were both involved with other people. Reynolds was still married to Scarlett Johansson, and Lively was dating her Gossip Girl co-star, Penn Badgley.

Fast forward a year, they're both single and go on a double date. Here's the twist: It was a date with different people. Reynolds talked about how awkward it was for the other people involved during an interview with Entertainment Weekly. He said,

That's legit like a scene that would happen in a romantic comedy with Julia Roberts or something. Reynolds feeling the fireworks is so Nicholas Sparks-esque. *Swoon.*

Obviously, Reynolds plays a lot of comedic roles and is known for being absolutely hilarious. However, you should not underestimate Lively, she also has an amazing sense of humor. On Conan, Reynolds opened up about Lively's comedic talent. He said,

My wife is the real, I mean she is a mercenary. At one point in the middle of the delivery, the doctor's cell phone went off and she said, 'Oh no. Go ahead, take a personal call. Feel free.' She was cracking jokes in the delivery room.

Honestly, that speaks to her humor and patience. Laughter can be the best medicine when things get tough in a relationship — take it from Reynolds and Lively.

Humans of New York snapped a picture of Reynolds and Lively during the Met Gala in 2017. The caption was a quote from Reynolds explaining something he loves most about Lively, and it's not a physical trait. He said,

That's pretty freaking beautiful if you ask me. Like, real thoughtful stuff.

4. When Reynolds said that Lively basically knows how to do everything.

We all have our strengths and weaknesses. Reynolds got very real about what he's learned during four years of marriage.

She's as handy as any home-improvement character you'd ever meet. Her mom will say, 'Ryan, how do I back up this hard drive?' And I'm just looking at her going, 'You're asking the wrong person. Blake is right there.'

I wonder if Blake can build an Ikea desk? Asking for a friend.

5. When he revealed how their relationship changed after having kids.

Reynolds approaches most things in life with humor, but during an interview on The Late Show with David Letterman he got all mushy about his relationship with Lively after kids. He said,

I'm not one for vomiting declarations of sentiment out across the airwaves, but when we had that baby, I fell more in love with my wife than I'd ever been in my entire life. I couldn't even believe it.

Do they grow all the men this nice up in Canada? Once again, asking for a friend.

6. When the butterflies are still so real.

There's no better feeling than the flutter in your stomach when you like someone. It's seriously the best. Even after years of marriage, Reynolds can't wait to get home to his family. While in an interview with AOL BUILD, he said,

When I wrapped Deadpool five weeks ago, within an hour — I'm not joking, I still had chunks of glue from the scar makeup on my face — I was boarding a plane to Bangkok so I could get to my wife and baby right away.

According to Google Maps, it takes a little over 18 hours to get to Bangkok from Los Angeles. An ocean will not keep these two apart.

7. When he gushes about her parenting.

These two seem like they love being parents. Reynolds is not afraid to give Lively most of the credit, though. He said on The Late Show with David Letterman,

I'm just a diaper-changing facility hooked up to a life-support system, but my wife, she's breakfast, lunch, and dinner. She's a human Denny's all day long ... and it never ends for her. She's the most beautiful Denny's you've ever seen though, I guarantee it.

I can just imagine Lively cooking up Grand Slams at home.

8. When he compared her to Beyoncé.

When your man says you out-Beyoncé Queen Bey herself, you don't let him go. When asked about her red carpet skills, Reynolds said,

My wife knows how to work a red carpet, I'll say that. Yeah, she might be the Beyoncé of red carpets. She's turned that into an athletic event.

Lively literally always slays on the red carpet, so he has a good point.

While no one may have this love thing figured out, Blake Lively and Ryan Reynolds seem to have the hang of it. They are for sure the ultimate couple goals.