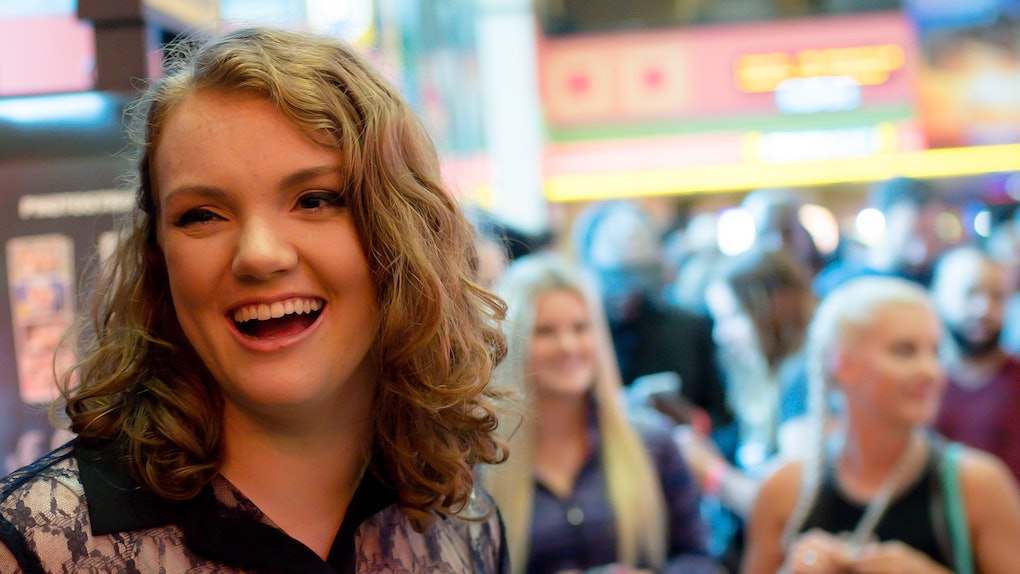 Barb IRL Vs. 'Stranger Things' Looks Like A Totally Different Person & It Will Blow Your Mind

One of the most talked about characters the past year in television has been hands-down Barb from Stranger Things. Barb, with her iconic hair and glasses, has firmly solidified a place in all our hearts. Poor Barb, always trying to do the right thing and then unsuspectingly gets caught in the Upside Down. Sigh. So, who plays Barb in Stranger Things? The actress who plays Barb IRL, Shannon Purser, looks so, so different from her on-screen counterpart.

Purser is a very gifted actress who has been popping up all over the place. Her Season 1 role in Stranger Things scored her a recurring spot as Ethel Muggs on Riverdale and a part as June Acosta in the horror flick Wish Upon.

Although Purser played a relatively small role on Stranger Things, she quickly became a fan favorite and noticed by critics. She was even nominated for the Outstanding Guest Actress in a Drama Series Emmy.

The 20-year-old actress has accomplished a lot in record time. Purser opened up to Elite Daily about how surprised she was when Barb received the outpouring of fan affection. She said,

I still don't really believe it... I mean, it was really strange because I had the time of my life and was just excited to be a part of it, and you know, for a few weeks after it came out, nothing happened which is kind of what I expected, and then all of a sudden all these tweets start flooding in... 'What happened to Barb?' 'Justice for Barb!' 'OMG where'd she go?' and it was so surreal, but it means the world to me because it's given me so many opportunities since.

YAS, JUSTICE FOR BARB. I miss Barb. You know who I'm happy I don't miss? Actual person, Shannon Purser. Barb may be our favorite Halloween costume, but Purser looks nothing like good ol' Barb IRL.

Obvi, she's an absolute knockout who loves to have fun with fashion. However, she doesn't mind talking about Barb or the fans enthusiasm around the character. When asked if Barb will make an appearance in Season 2, Purser said,

I honestly do not know anything... I know the vague statement that there will be justice for her, but besides that, no one will tell me anything, so I'm in the dark.

Season 2 of Stranger Things will be on Netflix LITERALLY SO SOON. The entire season will be released on Oct. 27, so you'll pretty much have to cancel all your Halloween plans — this is far more important. TBH, what would you rather do — have to put on a skin-tight cat costume or lie on the couch in your sweats and have your mind blown by Stranger Things? Obvious choice in my opinion.

One of the biggest plot points that has fans freaking out is Eleven's escape from the Upside Down.

A gooey, gross return back... but we're glad to have her. The short clip shows Eleven using her telekinetic powers to rip open the fleshy membrane that leads to Hawkins Middle School. She's covered in strange goo, but there's no mistaking the large bear paw (the middle school mascot is the cubs) painted on the wall.

The creepy membrane is the same thing we saw covering Barb's dead body at the end of Season 1. Another connection between Barb, Will Byers, and the Upside Down is the strange slug-like creature that we've seen crawl out of both their mouths. After Eleven's visit to the Upside Down, hopefully she can clear this disgusting pattern up.

Barb is too chill. If Purser is right and there will be justice for Barb, I'm curious to see what form it happens in. There are so many questions surrounding Season 2 of Stranger Things, I can't wait to watch it for myself and find out.

I think I speak for all of us when I say we collectively miss Barb. However, I think we'll be seeing a lot of Shannon Purser in the near future. #JusticeforBarb