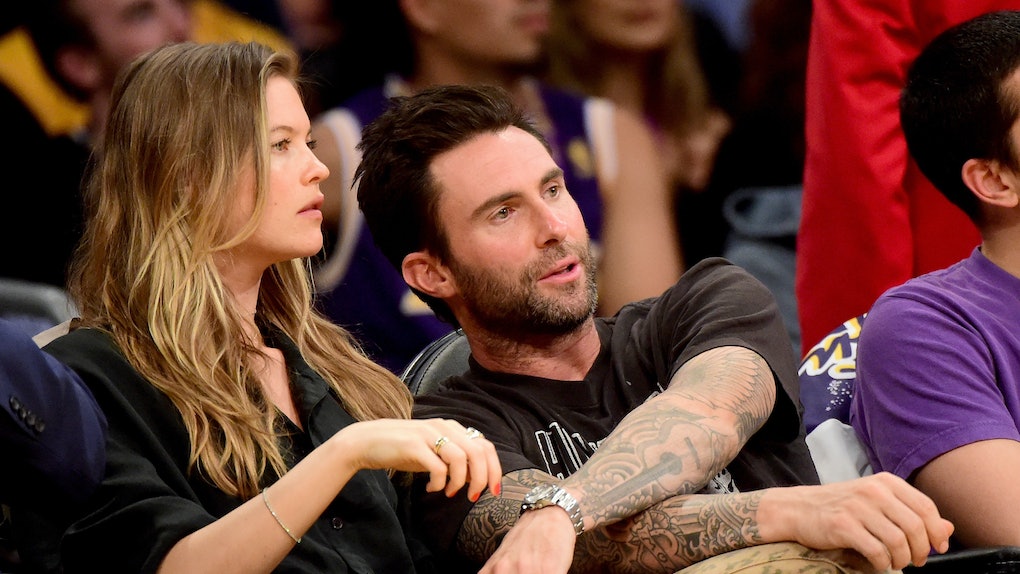 If you follow Adam Levine or Behati Prinsloo on Instagram, there’s one thing you know for sure: This is one couple that doesn’t shy away from publicly professing their love for each other. From silly candids to lovey-dovey birthday posts, their IG feeds make it pretty clear that their bond is far more than “Just A Feeling” (see what I did there?). But what do Adam Levine & Behati Prinsloo’s body language in these pics say about their relationship?

First, let’s discuss how the duo has reached #goals status on IG. Exhibit A: In honor of Levine’s 37th birthday back in March of 2016, Prinsloo posted a photo of herself riding piggyback on her husband’s back and added the caption: “Happy birthday to the love of my life! Everything is boring and meaningless without you!!! #besthusband.” That wasn’t the only time she gushed about the singer and host of The Voice, either. In June 2018, she posted a heartwarming pic in honor of Father’s Day of a shirtless Levine holding their baby daughter Gio Grace and gazing at her affectionately. Under the photo, she wrote, “Our girls are so lucky to call you dad and I’m so lucky to have you as a husband a lover and a friend. We love you. Life is better with you.” And Levine is no stranger to showing his appreciation for his supermodel wife on the ‘gram, either. In November 2016, he shared a pic of himself with his arm around Prinsloo (who has her their baby strapped to her) gazing at the ocean and captioned it simply: “Everything I need is right here. (Beach optional).” May 2018, he wished his wife a Happy Birthday by sharing a sassy photo of her in sunglasses and wrote: “The Queen turns 30 today. She’s a legend. She’s THE baddest. In just a few years we have laughed and loved harder than most. I wake up every morning thankful that it wasn’t all a dream. Here’s to a thousand more years. I love you @behatiprinsloo with everything I got.” There’s no denying it: I have the feels, you have the feels, we all have the feels.

Indeed, between Levine’s posts praising his wife during pregnancy and Prinsloo’s proud posts gushing about her husband's accomplishments, it’s obvious that they aren’t afraid to express their love on social media. Still, there’s much to be said for the subtleties of body language. Sometimes, a couple’s body language reveals much more about the nature of their relationship than they ever will in interviews, Instagram posts, and the like.

Fortunately, body language experts Traci Brown and Blanca Cobb weighed in on what some of their IG photos say about their bond.

On November 10, 2018, Prinsloo shared a photo of her and Levine on the red carpet at the Victoria’s Secret Fashion Show. It’s worth noting that this show marked the supermodel’s triumphant return to the Victoria’s Secret catwalk after having a baby. In the pic, she and Levine stand close to each other, looking off into the distance, with a somewhat blank expression on their faces.

“They sure don't look too excited to be here,” Brown tells Elite Daily. “Neither can manage a smile.”

Despite the fact that they aren’t smiling, Brown says their body language in this photo still bodes well for their relationship.

“They are glued together and ever so slightly facing each other,” she adds. “So they're on the same page.”

There’s a whole lot to say about this Instagram post from April 15, 2018. For one, Prinsloo is wearing a bucket hat with cherries on it as well as leopard print pants, and miraculously, it works. More importantly, though, she has her arms wrapped around Levine’s neck in the candid and they’re both laughing — I mean the eyes closed, mouths open kind of genuine laughter. Not to mention, his hand is casually resting on her backside. Prinsloo captioned the pic “Baby boiii” and followers were loving the post, saying “I’m dying,” “Favorite couple,” and “Phat jealousy rn. Y’all are cute.”

Brown admits that it’s an adorable pic. The most revealing aspect of it, though, is the lack of distance between them, as well as how their bodies are placed in relation to each other.

“They're getting in as close as they can and it's super intimate with him between her legs,” she explains.

"Adam settled in between his wife’s legs as she sits on the counter is pretty hot," adds Cobb. "Not only are they smiling, but they’re pretty close to each other."

When Levine posted this hilarious black and white pic of him and Prinsloo in May 2016, fans went wild. In the photo, he pokes fun at his reflection (which remarkably resembles Prinsloo’s pregnant belly), saying, “Week 20 and I'm finally popping! #impregnanttoo.” The humorous post garnered over 951K likes. And according to Brown, the post isn’t just amusing — it’s also ripe with info about their bond.

“This one is so telling about their relationship,” she says. “They're matching each other completely from the look on their faces to him making an effort to even have a baby bump. People match each other when they're emotionally on the same page.”

Not to mention, Levine’s ability to make fun of himself while simultaneously celebrating his wife’s journey is pretty significant.

“His baby bump is a big show of support,” adds Brown.

A little background: Levine and Prinsloo were introduced in 2012 — the singer was seeking a model for one of his music videos, and when a mutual friend recommended Prinsloo, the two started emailing back and forth on a daily basis. That back and forth exchange led to meeting in person, and despite sharing an awkward hug, Prinsloo told talk show host Andy Cohen that since they had already built up some chemistry, "It was kind of love at first sight.” Even though both of them have demanding work schedules, they clearly make time to nurture their bond — their body language says it all. Basically, if you’re looking for a little reminder that true love and high-powered careers can coexist, give either of these A-listers an Instagram follow.