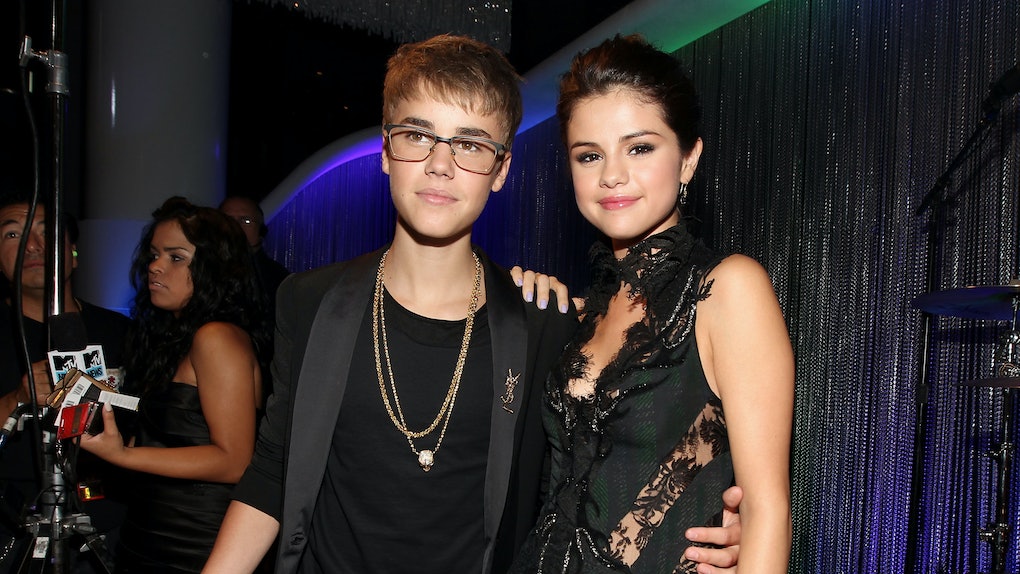 As we get closer and closer to saying goodbye to 2017, a few things go through my mind. The very first and foremost is THANK GOD. Good riddance to you, you awful, terrible year. I think we all have a mutual understanding that 2017 was not the very best for anyone — and obviously, I'm talking about celebrity couples. Anna and Chris, why? Fergie and Josh? You can't be serious. Audrina Patridge and Corey Bohan... well, I actually saw that one coming, TBH. But you catch my drift: 2017 was a total wash for celebrity couples, and it broke my damn heart. But, as sad as it was to see some couples who were the ultimate #relationshipgoals part ways, we can't forget that the universe did throw us a bone every now and then. Yes, we had some devastating breakups (that, quite frankly, I'm still not over), but we also had some celebrities who got back together in 2017, and for that, we should be thankful.

I know what you're thinking: nothing can replace the hurt you feel knowing that you won't see Chris Pratt writing cyber love letters to Anna Faris ever again. And when Fergie cried talking about ex-husband Josh Duhamel on The Wendy Williams Show, you cried a little, too. I see your hurt and I see your pain. It's okay to express your sadness, even if it comes in the form of drinking tons of boxed wine and crying alone on your couch.

I mean, we've all been there, amirite?

But as we're nearing the end of this god-forsaken year, let's try and focus on being positive, because there's so much to be thankful for. Case in point: the celebrities below who consciously re-coupled.

So wipe away those tears and save your drinking for, at minimum, the afternoon, and let's dive in to a world where true love may actually exist.

Did you really think we'd glaze over this one, or put these two towards the bottom in an effort to "save the best for last?" WRONG! SO wrong.

Selena and Justin are like The Little Couple That Could, breaking up — then making up — more times than we could even count. Ever since 2011, this pair won over the hearts of millions, and we thought that Jelena would be end game. Of course, things took a turn when they broke up in 2012 but then reconciled later that year... then broke up once again in 2013 but gave it another go in 2014... but then broke up again, and I'm really hoping you're sensing a pattern here at this point.

It was almost as if this couple was simply not meant to be.

But then, it was as if the heavens had opened up, because in our year 2017, we were granted another chance. Selena and Justin were spotted kissing in November, ultimately confirming that the two are back together. Only time will tell if they can make it to 2018, but we're going to have some faith here, and hope that these two can learn from their past mistakes and live happily ever after.

When I first saw photos of Chloë and Brooklyn skateboarding together back in 2014, I thought that this was a match made in celebrity heaven. They just looked like two casual teenagers hanging out, minus the fact that they're mega-famous and probably have more pocket change in their wallet than I do in my bank account.

This adorable couple finally confirmed their relationship in 2016, only to break up just a few months later, which was kind of heartbreaking because they were like the high school sweethearts who you were actually rooting for to stay together through college.

I mean, can we just talk about how freaking adorable they were?

But luckily for us, it was a short-lived breakup, and the couple was seemingly back on solid ground because 2017 decided it didn't want to be a total waste. Moretz even posted this very, very small-but-cute picture of the two of them, confirming that, yeah, they're back to doing the damn thing.

So, OK, 2017. You've caused a lot of heartache, but at least we can be at peace with the fact that you've given us something to work with.

So, this one might not be for sure, since neither party has confirmed, but we're going to take a leap of faith here. Slate and Evans met back in 2015 and I was feeling this pairing. The two seemed so chill and natural together that it almost looked liked they should have been dating forever. But of course, whenever I ship a couple, it automatically places a jinx on the relationship and then they break up, and ultimately, Slate and Evans confirmed their split less than a year after they got together.

But some recent social media flirting between the two has been going on, and it seems like they are most definitely hanging out with each other behind closed doors. And if you don't watch Evans' Twitter video below and hear a laugh that is MOST CERTAINLY Jenny Slate's, then you're clearly hard of hearing or not wanting to accept the truth.

So, while the pair may not have totally confirmed they are dating again, I think it's safe to say this un-coupled couple... re-coupled.

Because I'm the queen of speculation, I'm going to throw this one in here for good measure. I mean, let's face it: The Weeknd was spotted walking out of Hadid's apartment, and, after his recent breakup with Selena, maybe he just went to go there to talk about love and loss.

But also, probably not.

Seriously, does this look like a guy who is just calmly leaving an old friends house with nothing to hide?

So will these former flames decide to make things official once more in 2017? The forecast looks hopeful, with a chance of definitely positively yes yes oh please yes.

Me, once The Weeknd and Bella Hadid officially confirm their relationship: