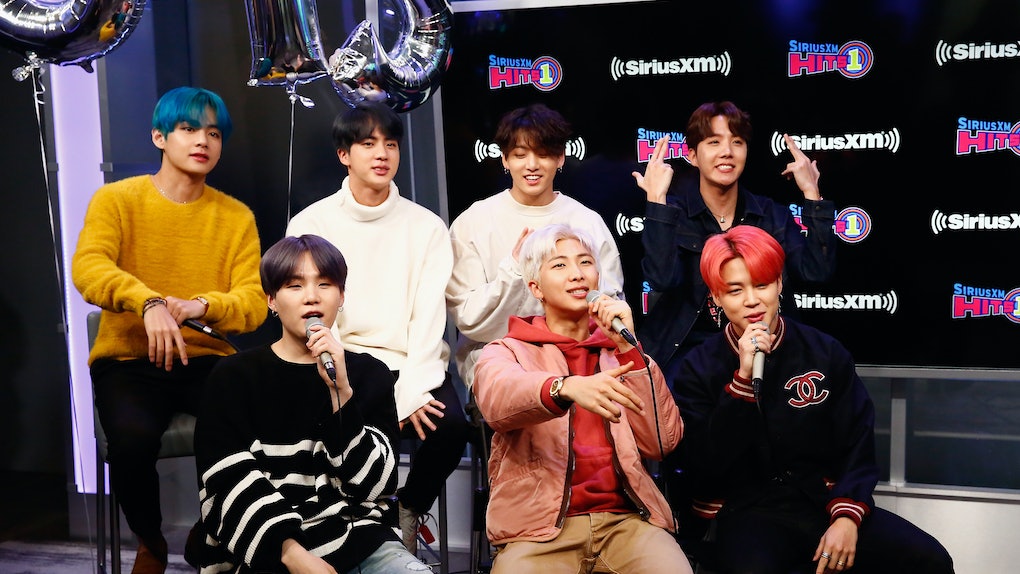 8 Products BTS Sold Out Because Of Their Golden Touch

Everyone knows that the BTS ARMY will always go hard for their favorite seven idols, whether it's about defending them online or racking up millions of views on their music videos. ARMYs have proven they'll support BTS financially: from paying membership to the band's official global fan club to buying all the BTS merch they can get their hands on. It's clear that people are willing to shell out more than a few bucks to show their commitment to the South Korean megastars. But I'm not even talking about the wildly popular BT21 line, or tickets to BTS' sold-out shows across the world (even though those definitely sell like hotcakes, too). I'm talking about the products that RM, Jin, Suga, J-Hope, Jimin, V, and Jungkook aren't even intentionally endorsing. That doesn't stop the ARMY, because I've found nine products BTS sold out by accident, basically just by breathing in the products' direction.

This list is full of items that the members didn't even realize would cause a stir. But, really, shouldn't they know by now that the ARMY is always paying attention? From Jungkook's favorite laundry products to Suga's fashionably fuzzy sweaters, here are nine items that the ARMY sold out immediately after they noticed BTS used them.

This is probably the most famous incident of a BTS member accidentally selling something out by mistake. Jungkook revealed on BTS' fancafe that he uses Downy Liquid Fabric Conditioner in the scent "Adorable" (called "Amber Blossom" in the United States). He clearly only meant to make a fan's day by answering their simple question from a fan, but that was all it took to sell out a two-month supply of the fabric softener in one day, as reported by Koreaboo.

The economic power of the ARMY was so great that the story was featured on SBS CNBC, an economic news outlet that doesn't typically cover celebrity news.

Jungkook had a laugh about the whole incident, expressing his awe over the whole situation on Twitter. "ARMYs... I need to buy fabric softener as we’re nearly all out but... It’s entirely out of stock," he wrote, according to a fan translation by Bangtan Translations. He also used a hashtag that translates to #ARMYYoureAmazing, which I definitely agree with.

BTS' 2019 BBMAs performance of "Boy With Luv" was highly publicized, but there was one particular part of the performance that caused a ruckus with ARMYs' wallets. Jimin wore a pair of Gentle Monster WOOGIE 02(P) sunglasses in pink during the performance, and honestly, it's no surprise ARMYs wanted to get their hands on them since they looked so damn good on him.

According to screenshots obtained by fans on Twitter, the sunglasses in question sold out in 14 different countries in just one day despite their whopping $280 price-tag. That's serious commitment to the Jimin aesthetic. At the time of publication, they appear to be back in stock in the United States, so if you want to look the part while you're bopping to "Boy With Luv," now's your chance.

Jungkook almost learned his lesson after seeing his fabric softener sell out because he let the brand name slip on fancafe. In a June VLIVE broadcast, fans asked for the name of his cologne, but Jungkook refused to give it to them. "I’m not going to tell you what it is, because I’m going to be the only one using it,” he told viewers, according to the Business Times.

Despite his best efforts to avoid brand names, however, he ended up selling out another product during his stream: his wine.

Jungkook opened a bottle of wine on camera with the label in full view, and it didn't take long for ARMYs to track it down. The wine, Merlot Marche by Umani Ronchi Vigor Sangiovese, completely sold out in Korea within 24 hours of Jungkook's broadcast, according to Hellokpop. I guess we all want to know what it would be like to share a bottle of wine with Jungkook (or at least, the many, many ARMYs over 21, that is).

It looks like the merlot is no longer available on Umani Ronchi's website, but there is a white version of the Vigor wine. Jungkook at least had a small victory, though — the ARMY still doesn't know what cologne he wears!

Suga wore an oversized, super-soft-looking Calvin Klein sweater during BTS' ARMYPEDIA talk show in March. He looked so comfy and cozy that Soompi's report that the sweater sold out immediately after Suga wore it doesn't come as a total shock.

Like Jimin with his sunglasses, though, it seems like Suga has expensive taste. When Suga was rocking it, the sweater retailed for over $750, according to the fan account Beyond The Style. At the time of publication, however, it looks like you can get it yourself on sale at Modesens... for $475.

If you think BTS' golden touch is only a recent talent, think again: they were selling items out back in 2015. In a November 2015 Bangtan Bomb, Jungkook, referred to as "Mr. Lip Balm" in the video's title, jokes around as he applies Nivea lip balm, saying the brand name and even showing off the label to the camera as if he were advertising it. (Truly a rookie move.)

ARMYs were quick to track down the product, Nivea Fruity Shine Lip Care. At just $3 a pop, it's thankfully way more affordable than Jimin's sunglasses and Suga's sweater. This meant, of course, that ARMYs went into a frenzy to get the balm. "Nivea" trended on Twitter in Korea shortly after the video came out and the lip balm sold out, according to Koreaboo. Nivea even went on to use a cartoon of Jungkook to promote the lip care line in Korea. You really can't make this stuff up.

After Jungkook was seen with Kim Soo Hyun's essay, I Decided to Live as Me, in a video, fans in Korea and Japan rushed to get a copy of their own. Allkpop reports that not only did the book sell over 600,000 copies in Korea, it also became a bestseller in Japan. With over 150,000 copies sold, it set the record for most copies of a Korean publication sold in Japan. Honestly, breaking records is probably no biggie for Jungkook at this point.

If you want to read I Decided to Live as Me yourself, you definitely can... as long as you speak Korean. So far, the essay hasn't officially been translated into any other languages, but the publishers have said they're working on it.

V is known for taking fashion risks; he can — and has — pulled off just about every style out there. It comes as no surprise, then, that the ARMY keeps a watchful eye on what he's wearing and jump on the trends he starts.

In June, V was spotted wearing an artsy brooch shaped like a painter's palette at Incheon Airport, and it didn't go unnoticed by fans. The palette, created by British independent artist Kate Rowland, quickly sold out, according to the New Straits Times. Rowland actually had no idea why, at first.

Of course, Rowland is running a small business, so she couldn't take every single ARMY's order for a brooch at once, but she promised on Twitter to restock when she could.

At the time of publication, the palette brooch is still sold out, unfortunately, as is just about every product on Rowland's site. It's so awesome to see V promoting lesser-known artists, even when it's not necessarily his intention.

We may not all be blessed to have Jungkook's swoon-worthy smile, but you can't stop the ARMY from trying: In a Bangtan Bomb from July, Jungkook brushed his teeth in preparation for a performance (and formed a heart with his bangs, because he apparently never turns off the cuteness). While most were probably focusing on him messing around with making hearts, some laser-eyed ARMYs were busy figuring out what toothbrush Jungkook used to achieve those pearly whites.

And then, of course, they bought them all.

And when I say "bought them all," I don't just mean on one site. According to Koreaboo, ARMYs sold out the coveted toothbrush — WANGTA's Dr. Baek Toothbrush 688, to be specific — on four different sites: Coupang, wemakeprice, BADD Beauty, and Amazon. At the time of publication, the brush is still sold out on Amazon, so fans will have to settle for a regular toothbrush for the time being.

So, there you have it. BTS are some of the most influential celebrities on the planet, even when they're not trying to be. Considering BTS' unprecedented level of success and economic power, it's no wonder people want to live like them, dress like them, read like them, and, I guess, brush their teeth like them, too. Only time will tell what they accidentally sell out next, but my money's on ARMYs finding out the name of Jungkook's cologne.

More like this
Are Meghan & Harry Getting Paid For Their Netflix Show? Here's The Deal
By Sydney N. Sweeney
8 Facts About Lisa Delcampo On 'The Circle,' AKA Lance Bass' Assistant
By Rachel Varina
Emilia Clarke's Comic Book 'Mother Of Madness' Is Full Of Girl Power
By Ani Bundel
Stay up to date