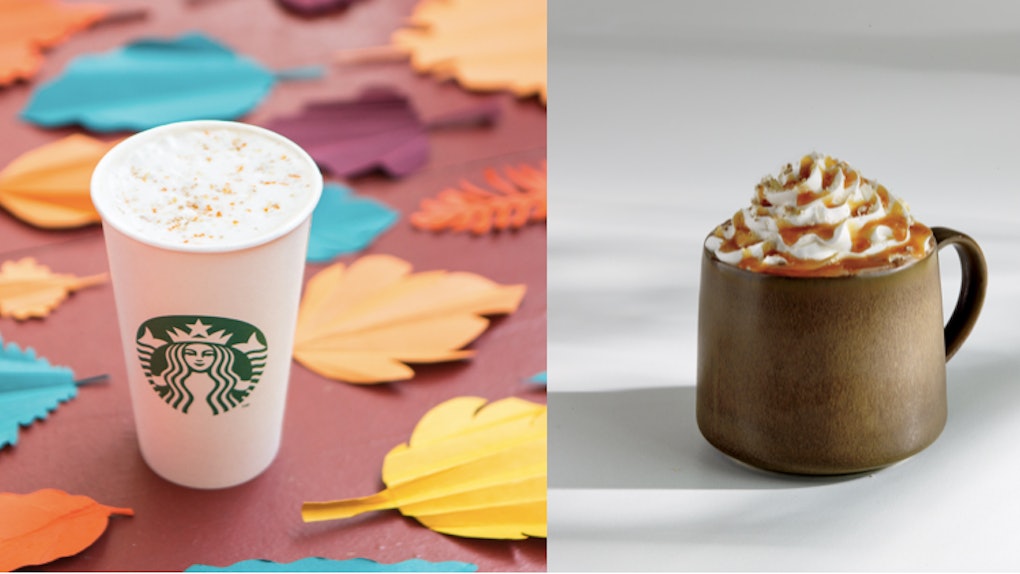 8 Of The Strongest Starbucks Fall Drinks, Ranked To Help You Wake Up

Aside from Halloween, Thanksgiving, colorful foliage and (finally) cooler weather, my absolute favorite part of autumn is Starbucks' seasonal fall menu (I know, it's basic, but what can I say?). Anyway, Starbucks' fall menu contains a lot of tasty treats, and it's safe to say that each and every drink on there always manages to brighten up my morning. As things at work tend to pick up right before Thanksgiving and the winter holidays, however, a little extra caffeine is definitely necessary. So, if you prioritize your coffee runs like I do, here are 8 of the strongest Starbucks fall drinks, ranked to help you wake the heck up.

While Starbucks' fall menu tends to vary flavor-wise (yes, it's not all pumpkin spice up there), it also varies tremendously on the caffeine scale. Many of these boast an impressive amount of caffeine, however, some drinks are far lower on the caffeine spectrum. Since caffeine is hella important (to me, at least), I've taken the liberty of ranking each and every one of them, starting with the most caffeinated options, leading down to the least caffeinated. Check them out — when those pre-holiday work weeks arrive, you'll definitely be happy you did.

You probably wouldn't think that combining mocha sauce with toffee nut syrup, coffee, milk, sweet whip, caramel drizzle, and turbinado sugar would make for a super caffeinated beverage, but you thought wrong. Per Starbucks, a Grande contains a whopping 175 milligrams of caffeine, which is about 15 more milligrams more than the PSL and the Maple Pecan Latte. Who knew?

If you haven't tried a Maple Pecan Latte, it blends bold espresso with steamed milk, brown butter, and a sugar topping. It boasts a somewhat impressive amount of caffeine, with 150 milligrams in a Grande, according to the Starbucks website. It's definitely a good option if you're looking for a small midday pick-me-up.

Starbucks' PSL tastes like Thanksgiving in a to-go cup, mixing espresso, milk, nutmeg, cloves, and whipped cream. It contains just as much caffeine as the Maple Pecan Latte, which is about 150 milligrams of caffeine in a Grande, per the Starbucks website. So, it's definitely not too shabby in the caffeine department, if you know what I mean.

The Maple Pecan Frappuccino is similar to its corresponding latte, blending most of the same ingredients with ice and milk. Like the Pumpkin Spice Frappuccino, it boasts 100 milligrams of caffeine in a Grande, per the Starbucks website, making for a relatively-energizing frozen treat.

Combining two of the best fall flavors, chai and pumpkin spice, Teavana's Pumpkin Spice Chai Tea Latte is a delicious winner in my book. Unfortunately, it only has a mere 70 milligrams of caffeine in a Grande, per the Starbucks website, which is far less than many of the other fall drink options. At least it's delicious, though!

For every kid-at-heart is the beloved hot chocolate. Mixing steamed milk with vanilla and mocha syrup, sweet whip, and chocolate drizzle is undeniably delicious, but unfortunately, it's not highly caffeinated. With only 25 milligrams of caffeine in a Grande, it's not much of an energy boost, in the slightest.

Adding toffee nut and vanilla syrups as well as caramel sauce, turbinado sugar, and sea salt to a classic hot chocolate makes for a sweet-and-salty Salted Caramel Hot Chocolate. And although it's delightful, it sadly doesn't add any caffeine. According to the Starbucks website, a Grande will get you a mere 25 milligrams of caffeine, like the classic chocolate drink. If you're seeking an energy boost, I'd pass on this.

Fall drinks are the best, but if your priorities are similar to mine, caffeine is extremely important. If you're in the mood for something sweet on the less caffeinated side, one of the tasty hot chocolate options is definitely the way to go. If you'd prefer a real energy boost, the Salted Caramel Mocha is definitely where it's at. Happy fall, and remember to sip like no one's watching.