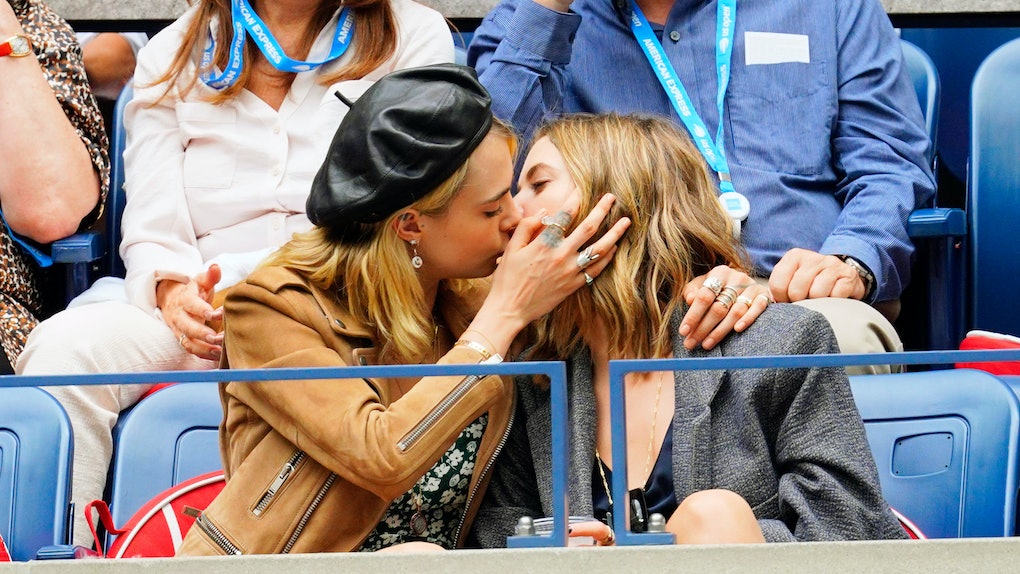 Everyone knows Ashley Benson and Cara Delevingne are a stunning, talented, universally likeable couple, but fans didn't know for sure whether or not they were actually a couple for over a whole year until they verbally confirmed it. Thankfully, they weren't subtle in their hints. Ashley Benson and Cara Delevingne were ultimate couple goals long before they started showing PDA in public and posting Instagram tributes to each other, and if you're looking for proof, well, look no further.

The two reportedly met on the set of the rock 'n' roll drama Her Smell in April 2018. They kept the details of their relationship out of the limelight in an effort to conserve their privacy, and to this day haven't verbally divulged much. Even when photographed by paparazzi or attending events together, they didn't publicly peak about their love until June 2019 — more than a year after they reportedly met.

When asked about their budding romance in back August 2018, Benson coyly told People, "I think it’s the best way in any relationship. I’ve always been very private about them, and I think it’s just better.” In August 2019, Delevingne dished on their meet-cute in a Marie Claire interview, saying, “We weren’t looking for it. It was really just very authentic and natural."

Below, seven times Benson and Delevingne were total couple goals.

1. When Ashley Wore Their Initials Around Her Neck

Any serious Delevingne-Benson stan knows that initials are big with these two. A few days before the two were snapped kissing at Heathrow Airport in London, Benson posted an IG pic wearing a necklace with the letters "A" and "C" dangling from the chain. Granted, this was back in August 2018, so their relationship was just a rumor at the time. But what a chic nod to their early love!

2. When This Photo Made Them The Talk Of Fashion Week

Benson really put in work as peak-encouraging girlfriend for Paris Fashion Week 2019. She reportedly sat front-row at Balmain while Delevingne walked the runway, and with Delevingne's sister, Poppy Delevingne, at Chanel. Shortly after, stylist Jamie Mizrahi snapped a picture of the couple in a "cuddle puddle." A supportive partner who'll fly across the world to show up for you? Love to see it!

3. When They Infamously Dragged A Sex Bench Inside

On a truly iconic day in May 2019, Delevingne and Benson were photographed carrying a sex benchinside from their car — specifically the "Master Series Faux Leather Sex Bench" from Wild Secrets. The photos caused a gleeful ruckus on queer Twitter and across social media. Of course, there's nothing wrong with vanilla sex, but it's always cool to have a partner who's willing to try new things with you in the bedroom.

4. When Ashley Sold Her House To Move In With Cara

In June 2019, People reported that Benson reportedly sold her house and moved into Delevingne's. Not only is this a big relationship milestone in general, but based on Benson's past comments about moving in with a partner, it was pretty major for her, personally. When asked whether she'd ever move in with then-boyfriend Ryan Good in 2012, Benson told Teen Vogue, "I don't think I could live with anybody. I had roommates, and it's not for me. I like my space!"

5. When Ashley Got Tatted for Cara, Possibly Twice

With the unveiling of her campaign with Privé Revaux eyewear, Benson revealed a "CD" tattoo on her side in July 2019. She also has a tattoo of the word "squish" on her hip — a reference to Delevingne's childhood nickname. Tattoo artist Jon Boy tagged the Insta photo with both Benson and Delevingne in August 2019.

Delevingne also has a red letter "A" tattoo on her side.

6. When Cara Called Their Relationship "Sacred"

In a September 2019 interview for Elle UK, Delevingne was asked why she's so "hesitant" to talk about her love life in public. To that, she replied, "Because it’s sacred." Delevingne went on to clarify that she's not ashamed or trying to be secretive about it. She's just figuring out how to navigate being in love and being a celebrity at the same time.

"People make their own assumptions and that’s what worried me," she continued. "Because if it is something that is so good, you don’t ever want anyone to ever change it, even though people shouldn’t have that power."

7. When Cara Planned A Moroccan Getaway for Ashley

The couple ended 2019 on a truly romantic note. For Benson's birthday on Dec. 18, Delevingne surprised her with a trip to Morocco — somewhere she said she's always wanted to visit. Sharing some shots from the trip, Delevigne spilled her heart out to Benson in an ultra-tender Instagram post. "I faced so many fears and took on new adventures with my best friend by my side," Benson wrote of her birthday trip. "I couldn’t have asked for anything better. I love you @caradelevingne. Thank you for making my birthday the best yet."

Watching the progression of their love from afar has been such a treat, and I can't wait to see what's next for these two.