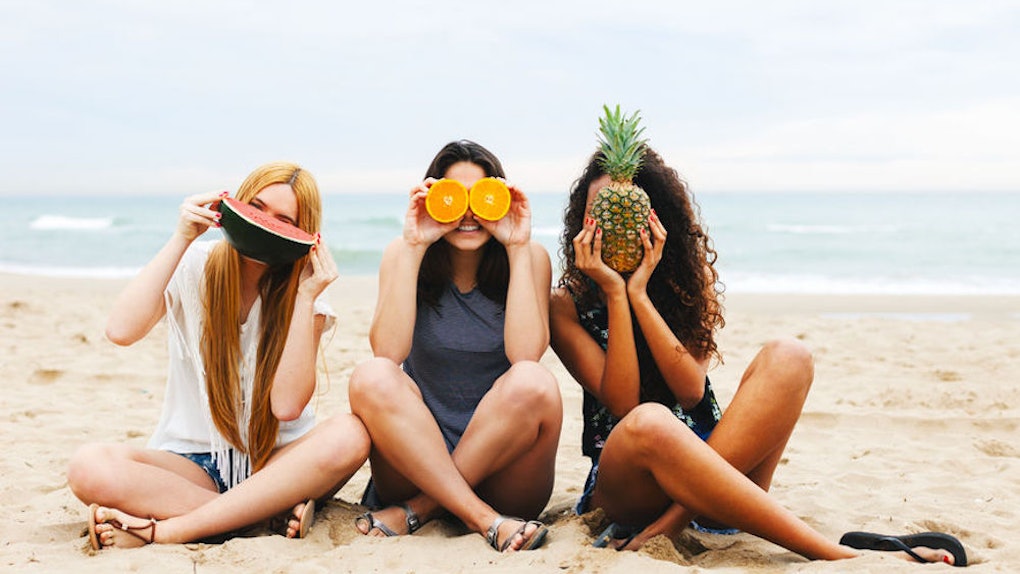 7 Ridiculous Things You Do For Your Friends, Because They're Your Ride Or Dies

Let's be honest, you'd likely do anything for the friends in your life who have been there since day one. Over the years, you've agreed to some pretty wild ideas that your besties have come with. There have been adventures and memories you wouldn't trade for the world, but some of them were truly spontaneous, hilarious, and cringe-worthy when you look back. These girls are your partners-in-crime, so you wouldn't ever let them go at life alone. The ridiculous things you do for your friends may make you seriously question your judgement (with a smile on your face). They're your ride or dies, what else can you say?

You remember back in high school when they were crushing hard on someone, and you went to every length to figure out if that special someone liked your friend that way, too? In college, you'd stay up all night on FaceTime catching up, despite the fact that you had an exam at 8 a.m. Now, you're adulting, but you'd still lose some sleep for your bestie and instantly agree to late-night dates at the diner.

Maybe you've helped them get out of dates that have gone wrong, or tried something they've cooked even though you knew it was questionable. You're living your life with no regrets, but there are a few things you've done that make you feel like the friend of the century.

1. You've Been The Third Wheel

When a bestie was crushing hard, she needed to call in all of her reinforcements. She wanted to hang out with her new bae, but couldn't show up to the party alone. That's when you had to throw on some pants and call it quits on that lazy Saturday night and much-needed "me" time. Seriously, if getting out of bed didn't show your friend how much you care, you're not sure what would. I'm talking leaving behind your pillow and so much comfort for a crowded bar scene. At the end of the night, when they kissed goodbye, you warmed up the car in true third-wheel fashion.

Your life at one point or another has been like that challenge on Survivor where they have to eat weird food from the jungle. You've seriously tried some, well, interesting dishes thanks to your bestie. Some of them she cooked herself, and others she may have ordered at a restaurant and decided she didn't like after taking two bites. That's where you and your fork had to come in, because it would make her look so bad if she left all of that on her plate. What is this supposed to be again? You know what — ignorance is a lot of bliss in this scenario.

You've shared some truly amazing food with your partners in crime. There have been those plates that weren't so appealing to your palate. But then, there are the six-piece nuggets and medium fries from McDonald's that you've reluctantly given up along the way, as well. Honestly, you knew were close the second you let your girls share the dipping sauces. There are few people in this world who will rave about honey mustard with you. So, at the end of the day, although sharing food is truly ridiculous sometimes, you're happy to have these humans in your life.

You didn't exactly know the person, but you followed them on social media purely for one of your besties. Maybe she wanted to scope out their profile, but it was set to private, or she was crushing hard but didn't want to seem like sort of a creep. It may seem ridiculous, but you know she would do the same if the tables were turned. Honestly, this person has a pretty good feed on Instagram, so you don't mind it when their pictures pop up from time to time. Just make sure you don't accidentally like anything when you're doing some serious digging.

5. You've Gone To New Levels For The 'Gram

Do it for the 'Gram, right? Actually, think again. It's all about doing it for your bestie. Being the blogger in my friend group, I've gone to some serious levels to get the ideal picture. I've faced some chilly AF weather, and climbed into little nooks with my camera for the best angles.

Odds are, even if you're not the girl with the photography skills in your crew, you've done something a little odd just for the perfect snap. Maybe you've power pointed, or done that "candid" laugh so your bestie could have a cute post for social media. Oh boy, now it's out for the whole world to see.

6. You've Had Her Back Even When She Was Wrong

You'll always be the first one to call out your bestie, but there have also been a few times when you've just had to have her back, despite the fact that she was wrong. You've backed her up when she was truly upset about something that happened at work, and given her your best advice while also being the reliable shoulder to cry on. There were those times when she was being a bit ridiculous herself, but you knew that her heart was too set for anything to change. So, you went along with it and waited for the storm to pass. Listening to her rants over some ice cream isn't so bad, after all.

7. You've Agreed To Every Adventure

Not a big fan of rollercoasters? Well, you somehow got talked into riding the biggest one at the amusement park. Hate the outdoors? That's OK, you're going to go camping this summer and will pitch a tent like the pros. Balling on a budget? Life's short, you just have to buy these plane tickets! Oh yes, your life has been pretty interesting thanks to your bestie and her thrilling ideas. She's the one in your friend crew who's always on the move, or searching for the next best thing.

Sure, you could sit at home, but the FOMO would like be too real. Although going along with every single adventure may feel a bit ridiculous sometimes, you do it anyways. Your ride or dies are there through thick and thin, and the memories will be just as weird and amazing as your relationship.

More like this
How You Love To Be Spoiled, According To Your Zodiac Sign
By Roya Backlund
The 'Friends' Experience In NYC Sleepover Opp Will Make You Say, "Oh. My. God."
By Rachel Chapman
39 'Shadow And Bone' Quotes From The Dregs For Pics Of You & Your Squad
By Rachel Chapman
Stay up to date