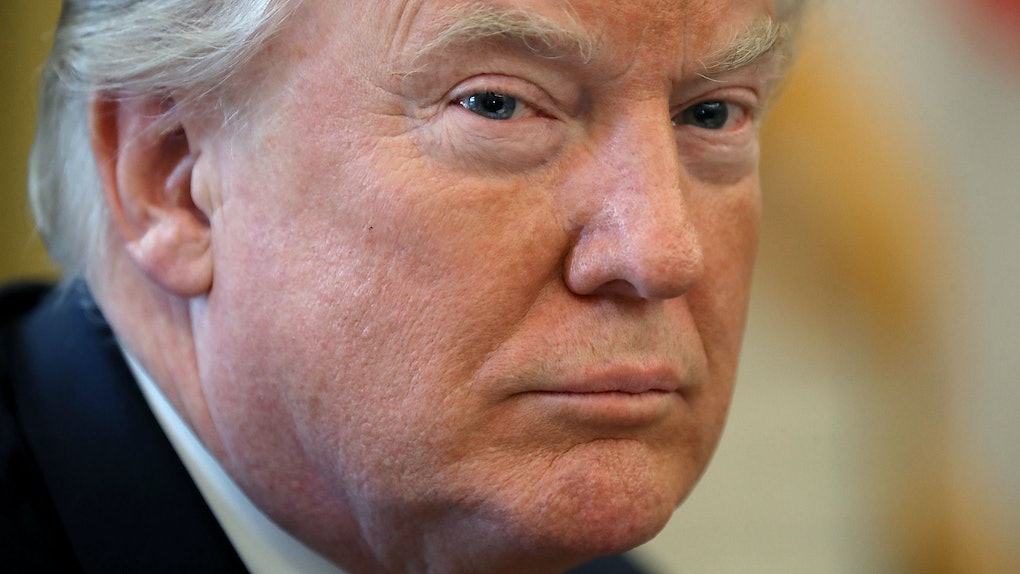 If there is one thing that the president consistently outdoes himself on, it's offending marginalized people. Since the beginning of his campaign, no one has been safe from President Donald Trump's discriminatory language. Women, Mexicans, Muslims, black people, and people with disabilities were all subjected to hate as he rallied supporters — and since his win, things have only gotten worse. Here are seven racist things Trump said in 2017.

"Violence on both sides."

While not a direct attack against a specific racial group, the president's comments following the white supremacist march in Charlottesville, Virginia on Aug. 15 entirely delegitimized the cause of those fighting anti-racist protesters by equating them to neo-Nazis and KKK members. Trump said violence came from "both sides," although the rally was planned by white nationalists with the stated intention of protesting the removal of the confederate Robert E. Lee statue. However, Jason Kessler, right-wing blogger who organized "Unite the Right," claimed the rally was partially about removing the statue, but also about free speech and "advocating for white people," according to the Associated Press.

I never thought I'd see the day where an employee of Infowars would be condemning Donald Trump's behavior, but 2017 has been a wild year. In late November, the president retweeted a number of anti-Muslim propaganda videos, with varying levels of credibility, from the far-right Britain First Party. This prompted Paul Joseph Watson, editor-at-large of Infowars, to tweet this:

Trump's retweeting even prompted a response from the Dutch government. On Nov. 29, the Netherlands Embassy Twitter account wrote, "Facts do matter. The perpetrator of the violent act in this video was born and raised in the Netherlands. He received and completed his sentence under Dutch law."

This year, a number of NFL players followed Colin Kaepernick's lead and decided to kneel for the national anthem. The peaceful demonstration, made in protest of police brutality in America, angered the president so much that he commented on it during a rally for Alabama Senate candidate Luther Strange. At the rally, the president asked the crowd, “Wouldn’t you love to see one of these NFL owners, when somebody disrespects our flag, to say, ‘Get that son of a bitch off the field right now. Out! He’s fired. He’s fired!’”

"They call her 'Pocahontas.'"

It's one thing for Trump to make racist comments on Twitter or at rallies, but it's quite another to make them in front of people who are being honored for their contributions to this country. At a White House event honoring Native American "code talkers" who served in World War II, the president couldn't resist an opportunity to poke fun at Senator Elizabeth Warren, saying, "You were here long before any of us were here, although we have a representative in Congress who, they say, was here a long time ago. They call her 'Pocahontas.'"

"They want everything done for them."

President Trump managed to alienate Puerto Rican citizens seeking disaster relief by claiming that "they want everything done for them." The comments came after San Juan Mayor Carmen Yulín Cruz criticized the president for his lack of concern for the people of Puerto Rico. Couple referring to Puerto Rican citizens as "they" with the harmful stereotype of an entire country of Latinx people as lazy, and you've got a double whammy of racist vitriol.

At a meeting in Long Island, New York the president fell once again into dehumanizing language when describing members of the street gang MS-13. "They're animals," he said. He went on to encourage members of law enforcement to rough up suspects in their custody, saying, “When you see these towns and when you see these thugs being thrown into the back of a paddy wagon — you just see them thrown in, rough — I said please don’t be too nice.”

"Go back to their huts."

The president doesn't save his racism solely for the public eye. The New York Times recently reported that in a private White House meeting regarding border security, the president allegedly stated that the 40,000 Nigerians who had received U.S. visas in 2017 would "never go back to their huts" after seeing the United States. President Trump also allegedly claimed that the 15,000 Haitans who received visas "all have AIDS." White House press secretary Sarah Huckabee Sanders has denied these claims, which came from an anonymous source.