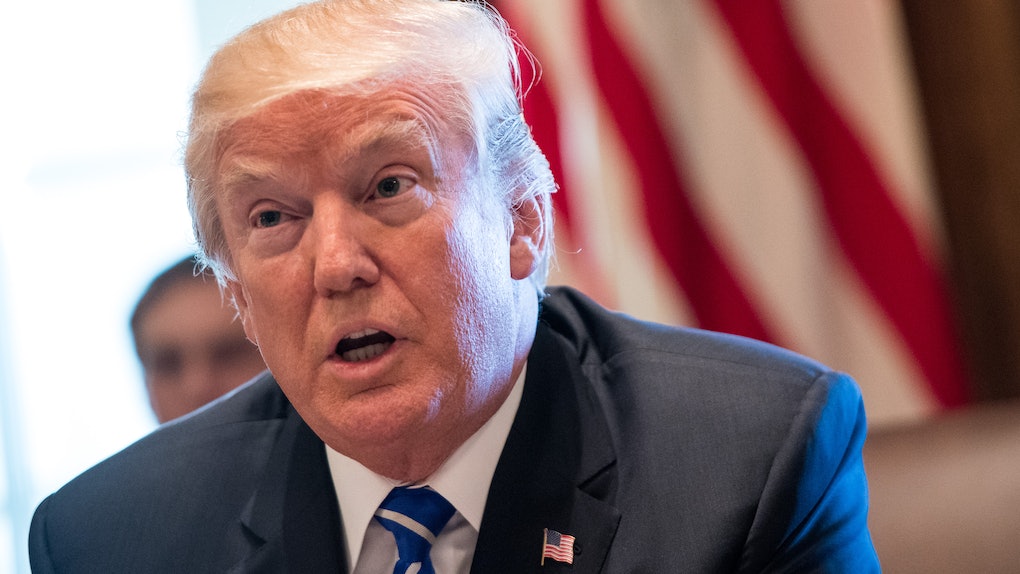 Donald Trump’s Pocahontas Joke In Front Of Native Americans Is Just So, So Wrong

Get ready to cringe so, so hard. The president is infamous for taking his disagreements with people about ten steps too far, but he really managed to outdo himself this time. Donald Trump’s Pocahontas joke while honoring Native American code talkers is so inappropriate you will literally want to shut your laptop and maybe leave the country.

During a Nov. 27 ceremony at the White House, Trump was on hand to recognize Navajo code talkers who sent and decoded secret messages during World War II. Pretty straightforward, right? Unfortunately, not really. The president decided to co-opt the event by taking a dig at Sen. Elizabeth Warren.

″You were here long before any of us were here,” Trump said. “Although we have a representative in Congress who they say was here a long time ago. They call her Pocahontas.”

He then turned to the veterans and said, "but do you know what? I like you, because you are very special."

It was clear that Trump was trying to make a joke with the Pocahontas comment, but was instead met with deafening silence. Because, you know, it really wasn't funny.

The president has called Warren by this nickname on multiple occasions, seemingly mocking the fact that the senator claims to come from Native American heritage.

If you're feeling alarming amounts of outrage about both the timing of this awful joke, and his choice of nicknames, you are not alone. Twitter has already begun to implode with fury.

Sen. Warren also stepped in with a response, telling MSNBC on Nov. 27,

It is deeply unfortunate that the President of the United States cannot even make it through a ceremony honoring these heroes without having to throw out a racial slur. Donald Trump does this over and over thinking somehow he is going to shut me up with it. It hasn't worked out in the past, it isn't going to work out in the future.

During a press briefing that very same day, ABC reporter Jon Karl asked Sanders, "why does [Trump] feel the need to say something that is offensive to many people while honoring the Navajo code talkers, genuine American heroes?"

I think what most people find offensive is Sen. Warren lying about her heritage to advance her career.

Sanders also denied that the comment itself was offensive, and told reporters that she doesn't believe the nickname Pocahontas can be qualified as a racial slur. "I don't think that it is, and I certainly don't think it was the president's intent," she told NBC's Kristen Welker.

Trump has repeatedly taunted Warren about her Native American heritage claim, dating all the way back to his 2016 campaign.

He re-upped the nickname again in the beginning of November, taking to Twitter to write,

Warren has faced scrutiny in the past for claiming to be partially Native American, particularly from her Republican adversaries. When Warren ran for senate in 2012, her opponent Scott Brown accused her of making up her heritage. While Warren was never able to provide any sort of documented proof on the matter, she wrote in her 2014 book, A Fighting Chance,

I never questioned my family’s stories or asked my parents for proof or documentation. What kid would? I was stunned by the attacks. How do you prove who you are? My brothers and I knew who we were. We knew our family stories. But the Republicans demanded documentation and, back at the turn of the century, nobody in my family had registered any tribal affiliation. In Oklahoma, that was pretty common. But knowing who you are is one thing, and proving who you are is another.

*Sigh.* At this point, it really doesn't matter whether or not Warren is actually Native American. What does matter is that Trump used a moment meant to honor war heroes, and turned it into an opportunity for offensive, inappropriate mudslinging. Once again, the bar just keeps getting lower and lower.