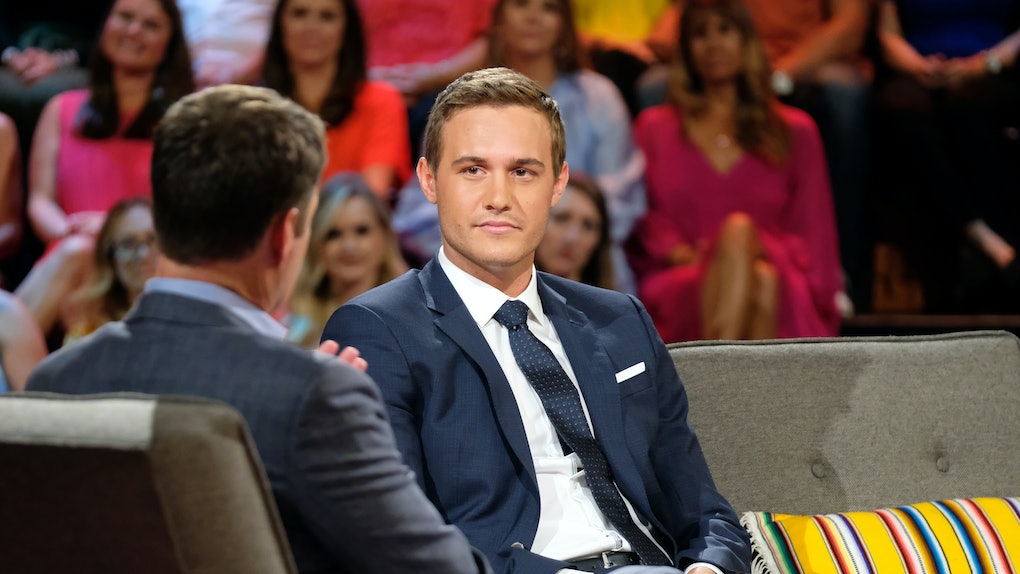 Bachelor Nation fans have officially reached the point in the year where their cravings for even the tiniest morsels of Bachelor news are at an all-time high. In just about one month, Chris Harrison will return to TV screens to lead audiences through another Bachelor's journey to find love. Luckily, until then, fans at least have some new details about Peter Weber's Bachelor season for fans to hold themselves over until the real feast of drama and romance commences.

During Peter's time as a contestant on Hannah Brown's season of The Bachelorette, he became known for two major things: his career as a pilot, and (perhaps even more famously) the fact that he and Hannah had a memorable hook-up in a windmill during their Fantasy Suite date. In the first promo for Peter's season, the Bachelor producers made sure to highlight both of those fun facts... and not much else. But come January, audiences will get to learn a whole lot more about Pilot Pete, starting with the season premiere on Jan. 6.

In a recent press release obtained by Elite Daily, ABC has revealed some juicy tidbits about Peter's debut Bachelor episode, including more details about former Bachelorette Hannah Brown's shocking appearance. Here's what audiences have to look forward to:

1. The Premiere Will Be 3 Hours Long

Fans better have some snacks handy when they settle in for what ABC is calling a "blockbuster" special. Clocking in at three hours, the Bachelor premiere will introduce the 30 women vying for Peter's heart.

2. There Will Be Group & One-On-One Dates

Usually the first episode of the season ends with a Rose Ceremony, but this super-sized premiere will continue even after the first eight women are eliminated. Fans will get the chance to get to know the remaining 22 contestants through two group dates and the season's first one-on-one.

3. Hannah Brown Will Host 1 Of The Group Dates

Last season's Bachelorette will return to lead a group of women through a live storytelling show in which they will reveal their most memorable sex stories and fantasies in front of an audience. However, her appearance might come with a fair helping of drama, since Peter will apparently discover "a distraught Hannah" backstage during the date, leading to some sort of a heart-to-heart between the two of them.

According to ABC, Hannah is going to open up to Peter with some information that could change everything for both of them. "What she shares with him will leave them both as confused as ever," the press release reads. Yikes.

5. Another Woman Has A Mysterious History With Peter

Hannah won't be the only woman who has already met Peter. There will be another contestant who has previously has "sparks" with the charming pilot, and they might be able to rekindle whatever they previously had between them.

6. Peter Isn't The Only Pilot This Season

The episode's other group date will feature some of the women learning more about Peter's greatest passion by going through flight school. They'll be taught by Alisa Johnson, a veteran Marine Corps pilot, and Katie Higgins Cook, the first female pilot in the Navy’s elite Blue Angels demonstration squad. Pilot Pete better be ready to share airspace.

7. Fans Will Get To See Peter's Family Again

Bachelor Nation fell in love with Peter's mom, dad, and brother during Peter's hometown date with Hannah, and the family's After the Final Rose segment made fans stan them even harder. Luckily, they'll be back this season — and soon — when Peter brings his first one-on-one date to his parents' vow renewal ceremony.